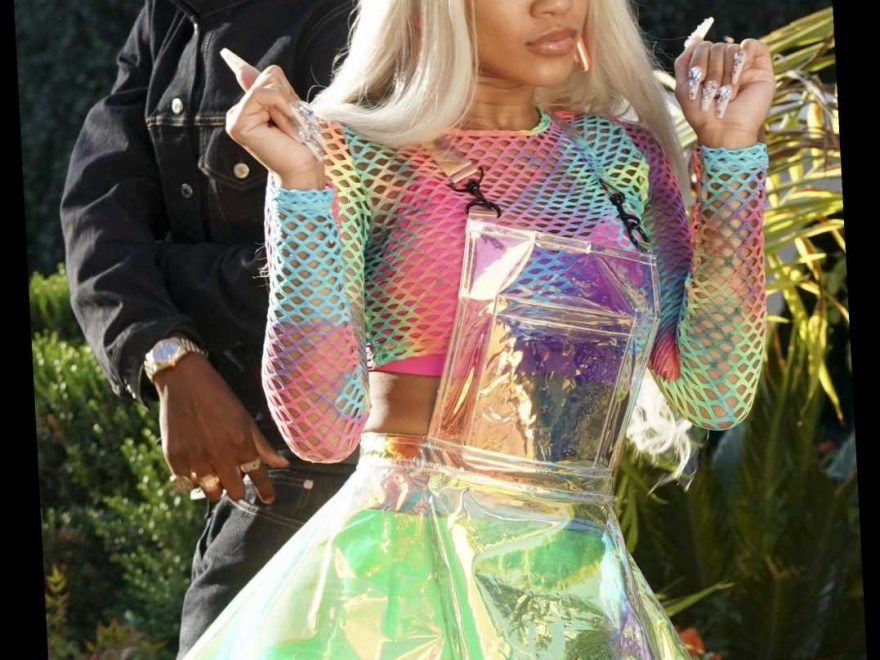 Saweetie is a shooting star. The Bay Area-born rapper, née Diamonté Quiava Valentin Harper, has seen her career in the music industry rise like a meteor, blasting off with her sizzling 2018 EP High Maintenance and the cool follow-up, Icy, the next year; but not before cinching her degree from the University of Southern California in 2016, where she studied communications. As she gears up for the release of her debut full-length album Pretty B.I.T.C.H. Music, Saweetie’s going back to school — sort of — with a guest-starring appearance in Kenya Barris’s hit series Grown-ish.

In her acting debut, Saweetie claims her spotlight as Indigo, a spirited rapper who counts Joey Bada$$ among her friends. Grown-ish’s third season, out today (January 21) on Hulu, finds series heroine and recent college dropout Zoey Johnson (Yara Shahidi) is booked and busy with two celebrity clients, including Indigo. The parallels between reality and fiction here are hard to ignore as both Saweetie and Indigo are strong-willed, independent female rappers owning their art and image. “My music covers a lot of parts of womanhood, of adulthood, of just the transitional eras of the different stages of your life,” she tells MTV News. “I definitely feel like there is a connection between the ‘Icy Grl’ music and Grown-ish’s [themes].”

Though Saweetie may no longer be a college student herself, she’s still taking her fans to class with her digital business and life academy, Icy University, which teaches everything from how to start a business to lessons in flyology. Ahead of the release of Pretty B.I.T.C.H. Music and her small-screen debut, MTV News speaks with Saweetie, clad in diamonds and fiery red waves on the opposite end of a Zoom call, about her career goals, her album’s acronymized title, and her “boss shit” advice for getting the life you want.

MTV News: Why did you choose Grown-ish as your first acting project?

Saweetie: Well, to be honest with you, it was the first thing that was brought to my team. It was a great first offer. I was honored and I took it immediately. I love Yara and the show was just already so good. So I hired an acting coach immediately and got to rehearsing.

MTV News: How was working with an acting coach? Was there anything you found particularly difficult or fun?

Saweetie: There’s nothing really hard about working with an acting coach, just because I know nothing, so I’m just there to learn. I think what’s hard is just yourself. When you get too into your head or when you’re not able to rehearse lines. For me, I’m very hard on myself, so the only thing that’s in my way is me, but my acting coach was super helpful, super informative.

MTV News: Now that you’ve got the acting bug, are there other projects we can hope to see you in in the future?

Saweetie: Well, I’m currently working on other audition tapes. I feel like the skits I’ve done on social media, along with maybe people knowing that I’m on the Grown-ish set, have opened up other doors. So I could definitely see myself getting on other shows or definitely other movies.

MTV News: You’re no stranger to the trials of undergrad life. What was your biggest growing pain or life lesson while you were in college?

MTV News: One of the iconic lines from the first episode of this season between you and Yara is, “Just do boss shit.” If you had to create a guide to boss shit, what would be your advice for making your own lane and setting the terms for the life you want?

Saweetie: Definitely going to school and getting an education. I say that not so you have to complete the full course, although that is good. But the situations that you’re placed in in college, you wouldn’t learn in corporate America or the street. I feel like it helps you. It grooms you to be an adult. So definitely college because it teaches you who you want to be and who you don’t want to be. So definitely experiencing a semester or two at a college campus.

MTV News: What about your advice for shooting your shot and setting the terms of the love you want?

Saweetie: I think women should normalize shooting their shot. I’ve shot my shot before. I’m very black and white, so if I want it, I’m going to go get it. I’m not going to think about it. But always with class, always with taste, always. Don’t go out there and go crazy, but if you’re a grown woman, you could do grown-woman things. And grown women go out there and get what they want, so don’t always wait for someone to approach you.

MTV News: Got it. And your advice for choosing your inner circle and setting a friend code to abide by? That’s a theme that you see a lot play out between Zoey and her girls.

Saweetie: What’s interesting is I’m actually doing a class on girl code in Icy University. I feel like growing up, girls just… It’s interesting, the nature of the relationships I’ve had before, which is why my circle is so small. I’ve had some PTSD-type of experiences with girl groups, so I think keeping your circle small, trusting your instincts, and keeping people around you who genuinely want you to succeed, who aren’t back-door type of friends.

MTV News: Speaking of success and empowerment, would you say those are themes that you often incorporate into your music? Is it something you’re thinking about when you’re in the ideation stage of creating an album or a song?

Saweetie: It’s interesting that you say that because it definitely wasn’t intentional in the beginning. When I’m creating music, I’m normally just speaking from my heart. But because I was raised by independent, bossed-up, just fly women, I think it’s just second-nature for me to act and to think that way. But in creating Pretty B.I.T.C.H. Music, I definitely do have certain lines or certain songs that are intentionally and purposely geared towards boss women.

MTV News: What’s the significance of redefining “bitch” and turning it into an acronym for your album?

Saweetie: Well, I wanted a title that would catch the attention. I think High Maintenance and Icy are great names, but they’re not going to make someone think and be like, “Oh, that’s great,” or “Oh, I hated her.” It doesn’t create a reaction, so I wanted to do something that intrigued someone.

I’m from the West Coast. I grew up listening to Tupac and I really love what he did with Thug Life, so that’s why I created an acronym for “bitch” because I say it so much in my music. I wanted it to be clear that when I’m saying “bitch,” people knew that it meant boss, it meant independent, it meant tough, it meant CEO, it meant hyphy. And for people who don’t know what hyphy means, it means turning up and having a good time. So “bitch” is definitely an acronym, and I feel like women like Trina, women like Nicki [Minaj], women like Foxy [Brown] — all women who use the term “bitch,” we use it in a very empowering way.

MTV News: Is there any particular lesson that you feel you learned while creating Pretty B.I.T.C.H. Music?

Saweetie: A lesson that this album taught me is that I’m very anal when it comes to recording. I hate beat packages. One of my requests is if I want to work with a producer, or if a producer wants to work with me, we have to sit in a studio together and create from scratch because I feel like that’s when I’m able to have my personality and soul in the beat. You know a song is good when the beat introduces the emotion before the lyric does. So, that’s one thing I learned while creating Pretty B.I.T.C.H. Music, that I have to be there for beat production.

MTV News: What do you hope fans take away from the album?

Saweetie: The narrative of just being bossed-up, independent, depending on yourself, doing things on your own terms, doing what she wants to do. I think those are continuous throughout the songs and the storytelling, just celebrating yourself. I feel like self-esteem is really important, especially in the day of social media, so just knowing who you are, knowing your worth and your value is really important.