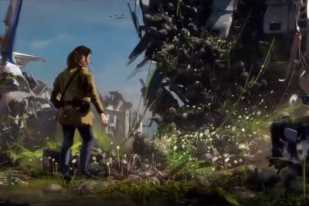 AMC is promising “a new world” for its third “Walking Dead” series.

In a brief teaser released on Tuesday, the cast for the upcoming spinoff hinted that the series will explore previously uncovered parts of the “Walking Dead” universe. The third series will focus on the first generation to grow up during the zombie apocalypse.

The video featured illustrations rather than any live-action shots, which makes sense considering the series just began production on Monday.

You can watch the brief video below:

“The new show is really on its own separate path. It’s a different feel and different tone,” David Madden, president of programming, AMC entertainment networks, told TheWrap last week at the Television Critics Association press tour. “It won’t look anything like the other two shows.” He added that the still-untitled series may not even have “Walking Dead” in its name.

“Some will become heroes. Some will become villains. In the end, all of them will be changed forever. Grown-up and cemented in their identities, both good and bad,” AMC said in its description of the series.

The franchise is also set to include a trilogy of movies led by former “TWD” star Andrew Lincoln, which AMC is putting out in theaters courtesy of Universal.