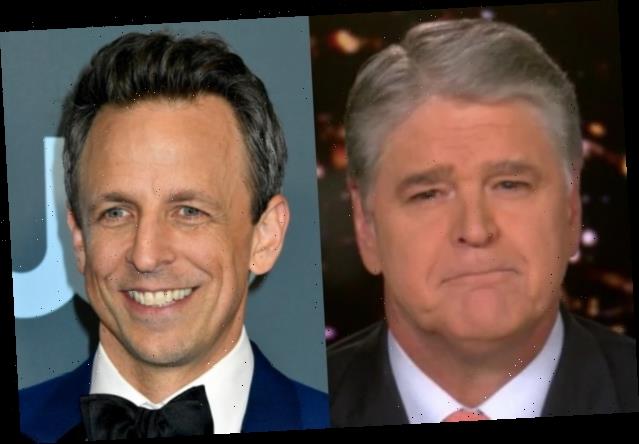 “My God, get your priorities straight”

“On Monday, Fox News barely covered the horrific Boulder shootings in primetime,” Meyers said during his “A Closer Look” segment.

“Apparently,” Hannity considered Joe Biden tripping on the stairs of Air Force One “much more important,” he continued. “My God, get your priorities straight.”

To be fair to “Hannity,” Monday’s show did (eventually) cover the Boulder, Colorado shooting. Alicia Acuna was live on the scene immediately following a police press conference.

That was not enough for Meyers.

“You guys repeat the same bulls— line every time we go through this awful ritual, that gun safety advocates are somehow rushing to politicize it,” Meyers said, lumping in Texas Sen. Ted Cruz and pretty much the rest of the GOP with that one.

(Did we mention he was fired up?)

In reality, the politicizing happens in the opposite direction, Meyers argued.

Oh yeah, and about that whole right-to-bear-arms thing.

“Let’s dispense with this ridiculous lie that has become canon on the right. That standing up to any sensible gun safety legislation means standing up for the second amendment,” Meyers argued. “It’s one of the greatest cons in the history of politics. For most of American history, the idea that the second amendment guarantees an individual right to own whatever gun you want was never even contemplated.”

Meyers referred to the GOP, NRA and Fox News Channel as “callous sociopaths who lose their minds at even the suggestion that maybe we should make it just a little harder to buy a gun in this country.”

If you thought Donald Trump was getting off the hook here, well, just stick it out until the end.

If all of that description makes this one sound a little too heavy for you, rest assured there are laughs, like when Meyers took “A Closer Look” at Ben Franklin’s pants.