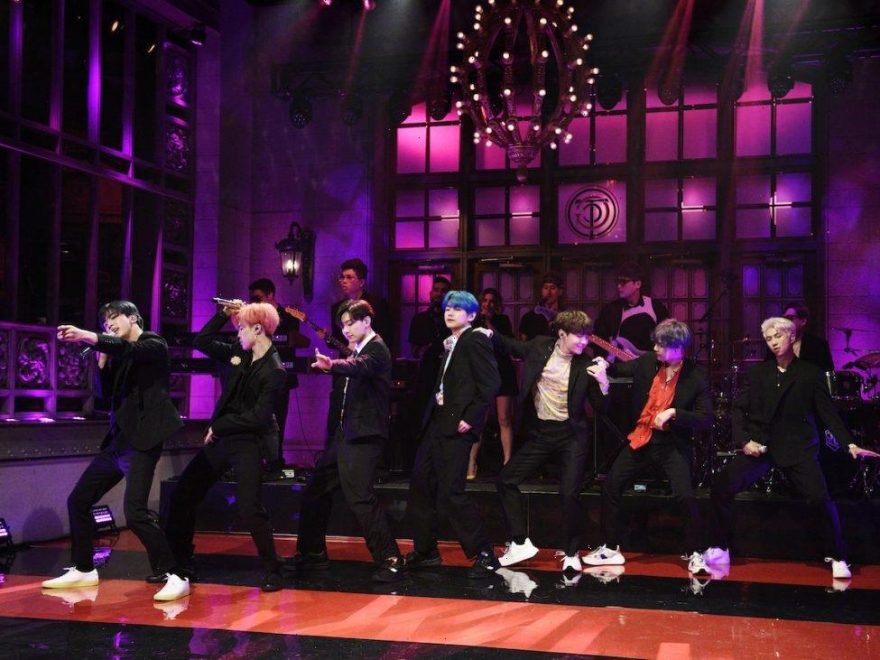 Emma Stone introduced the boy band to the audience, with the group then giving two performances, complete with live vocals and iconic choreography. Here’s what we know about this boy band’s 2019 performance.

RM, Jin, Suga, J-Hope, Jimin, V, and Jungkook are known for giving iconic performances, whether they appear on stage or Saturday Night Live. With Emma Stone as the host, the K-pop group, BTS, starred as the musical guests on the New York City-based series.

These musicians did not appear in a sketch for Saturday Night Live, but they did perform some of their biggest hits for their episode. That included their 2019 release, “Boy With Luv,” which first debuted on the album Map of the Soul: Persona.

BTS performed ‘Boy With Luv’ off of ‘Map of the Soul: Persona’

Dressed in suits, this K-pop group performed “Boy With Luv” from their 2019 release Map of the Soul: Persona on Saturday Night Live. Since it was published, the YouTube video of the performance earned over 25 million views.

This was the same song that the group performed during Dick Clark’s New Year’s Rockin’ Eve, as well as the Billboard Music Awards.

They also included it in their 2020 album, Map of the Soul: 7. The initial recording featured the artist Halsey but for the Saturday Night Live rendition, this boy band performed as a group of seven, along with their band in the background.

The boy band performed ‘MIC Drop’ off of ‘Love Yourself: Her’

In addition to their “Boy With Luv” performance, BTS performed their song “MIC Drop” off of the album, Love Yourself: Her, complete with different outfits and killer dance moves.

This was a historic performance for BTS, but it wouldn’t be the last. In 2020, the K-pop group appeared at the MTV Video Music Awards, performing their chart-topping single, “Dynamite.”

They became the first K-pop group to appear at the Grammy Awards, performing alongside Lil Nas X in 2020 and enjoying a solo stage in 2021. They earned a nomination that same year for “Dynamite” but did not receive the award.

Although Saturday Night Live sometimes invites artists to return, it’s unclear if BTS will appear for future episodes of this sketch comedy series.

The “Life Goes On” music video by BTS is now available for streaming on YouTube. The K-pop group’s deluxe album, titled Be, is available on Spotify, Apple Music, and most major streaming platforms.