As if summer 2021 didn’t have enough reality dating shows featuring hot singles, HBO Max decided to release another enticing title called FBOY Island. And yes, it’s just as messy and wild as you’d expect! Three lucky ladies will get to know 24 guys over a few weeks in the hopes of finding true love. Except only 12 of them are actually nice guys and the others are all self-proclaimed “FBoys.” But how does this show work? And do the women ever find out who is who?

Here’s everything you need to know about FBOY Island‘s rules and who gets to walk away with money (and/or love) at the end of it all. 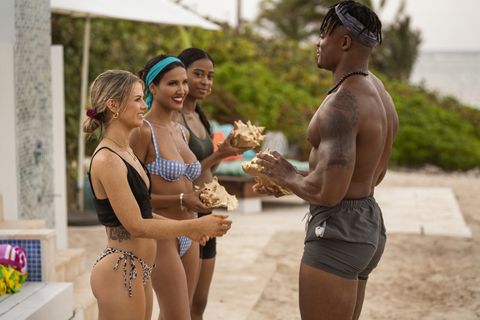 How does FBOY Island work?

It’s actually pretty simple. Three women move into a villa where they can date 24 different guys. Twelve of them are nice guys looking for love. The other 12 are FBoys who are actually there to try to win $100,000. Along the way, they all participate in challenges in the hopes of earning dates and alone time with the ladies. At the end of the season, the three women will choose who they want to end up with.

Do they ever find out who is a nice guy and who is an FBoy?

In first three episodes, the guys who get eliminated have to reveal whether they’re an FBoy or a nice guy before leaving the game. But being eliminated doesn’t mean that they’re completely gone…

What happens to the guys after they get kicked out?

The nice guys who don’t get to stay move right into the “Nice Guy Grotto,” where they get to drink all the Piña Coladas they want while living it up in a beautiful beachside house. Meanwhile, the FBoys head over to “Limbro,” a makeshift camp on the beach where they try to work on themselves, live off of coconuts, and sleep in cots with the other FBoys.

So how do you win money on FBoy Island?

This is the real question! At the end of the game, the ladies will get to pick who they want to end up with. But it seems like how much money they walk away with depends on whether or not they pick an FBoy or a nice guy. The rules for the ending haven’t been made crystal clear just yet, but hopefully we’ll find out more soon!