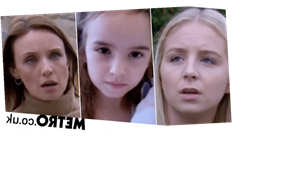 Belle Dingle (Eden Taylor-Draper) continued to struggle in Emmerdale tonight (October 15), and — with Lisa’s (Jane Cox) voice in her head — she lashed out and told Millie Tate the truth about Jamie (Alexander Lincoln).

Belle has been living in fear of a future behind bars after Jamie cleverly turned the tables on her and Nate Robinson (Jurell Carter).

With Belle having tricked him into revealing where he disposed of the car used in Moira’s (Natalie J Robb) hit-and-run, Jamie decided that — in order to get himself off the hook — he’d set Belle and Nate up for the crime.

The evidence is beginning to pile up against Belle, and her mental health is suffering due to the stress of the situation.

In tonight’s double-bill, she was tasked with working alongside Jamie for one final shift at the vets, but things took a shocking turn when she switched two vials in the back of Jamie’s boot in an effort to get revenge.

Jamie revealed that her actions almost resulted in him killing a horse, and when Paddy Kirk (Dominic Brunt) quizzed her on the matter, she decided to quit.

It soon came to light that Belle could hear Lisa’s voice in her head — with actress Jane lending her voice to the scenes.

Things took yet another sinister run, when the voice told Belle to confront Andrea (Anna Nightingale).

The young woman did just that, but when Andrea refused to listen, she video-called her instead.

However, Millie answered the call, and with the voice of Lisa in her ear, Belle told her that Jamie ran down Moira, and called Andrea a witch, before telling her to run away.

Andrea was horrified at learning what Belle had done, as was Jamie — the latter who set in motion a cunning revenge plan.

Will Belle be okay?