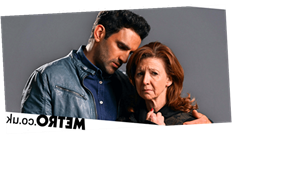 Kush Kazemi (Davood Ghadami) is set to make a dramatic exit from EastEnders, but could we see his mum Carmel (Bonnie Langford) back in Walford?

Bonnie — who portrayed Carmel on the BBC One soap — certainly hasn’t ruled out a return.

Speaking to Entertainment Daily, she admitted that the door is open for her to return.

‘I’m an actor, I’ve got to work. Kush needs his mother back!

‘Carmel went to Dubai but she might have to come back and make sure he’s behaving himself.’

Carmel made her first appearance on the serial drama in May 2015. She departed in 2018, after son Shakil (Shaheen Jafargholi) was killed amid the soap’s critically acclaimed knife-crime story.

It was revealed earlier this year that Kush — played by Davood Ghadami — will be making a dramatic exit from soap.

EastEnders continues Friday November 20 at 8:05pm on BBC One.

MORE : Secrets From The Square fills the EastEnders-shaped hole in your telly schedules to perfection

MORE : 19 EastEnders moments which defined Mick and Linda Carter’s reign as landlords of the Queen Vic