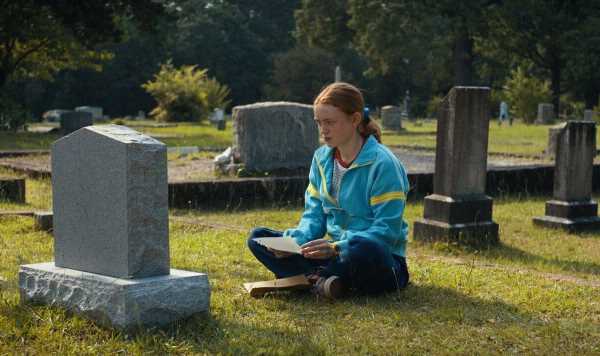 Stranger Things fans will be pleased to hear the series will return to Netflix on July 1. The first instalment of season four saw Max Mayfield (played by Sadie Sink) on the brink of death as she fell under Vecna’s (Jamie Campbell Bower) spell. She was attending counselling sessions with Ms Kelly (Regina Ting Chen) and actress Chen spoke exclusively to Express.co.uk about her co-star.

The Stranger Things cast have all branded the latest instalment the darkest and scariest yet.

The sci-fi drama had viewers on the edge of their seats as Vecna relentlessly claimed victims in Hawkins.

After tragically losing her brother Billy (Dacre Montgomery), Max was mourning his death in the first few episodes.

Vecna preyed on her vulnerability and lured her into his trap, almost claiming her soul entirely.

She had been seeing the school counsellor, Ms Kelly, about her symptoms but did not give too much away about what she was experiencing.

Ms Kelly had been described as everyone’s favourite counsellor who would always put her students first.

The member of staff is played by Regina Ting Chen, known for her roles in Queen of the South and The Falcon and the Winter Soldier.

The star spoke exclusively to Express.co.uk about her time at ‘Hawkins High’ and working in the presence of Sadie Sink.

She said: “It is an honour to get to work with Sadie Sink. Not only is she incredibly talented as an actor, but she is one of the most genuine humans I’ve ever met.

“She’s grounded, down to earth, such a gem.

“I felt an instant connection working with her and hope to do more with her in the future.”

The Watchmen and Dynasty actress said she had not anticipated the new episodes to be so dark and scary.

She said: “I’m actually afraid of the dark and was raised in a very superstitious environment so I was scared out of my mind when I saw it on screen for the first time.

“I could not sleep for a week!”

Max was relying on her friends to find out why Vecna was targeting her as they desperately needed a solution.

In the end, they discovered playing Max’s favourite song, by Kate Bush, would lure her back into the real world.

Actress Chen said one of her favourite moments from filming was the opening scene when she was directing the Hawkins students to the gym as she loved the 80s theme.

She said: “I actually for moments at a time forgot that I was Regina and felt fully immersed as Counselor Kelly.

“The extras that played the Hawkins students were all so dedicated to the 80s world that I thought it was real!

“They were all so much fun and easy to interact with, making my job even easier.”

On who she would have loved to have spent more time with on set, she said it would be a dream to film with anyone in the cast.

She added: “Such extraordinary actors. But in all seriousness, can we bring Mr Clarke back though? Who’s with me?!”

Mr Clarke (Randy Havens) appears in the first three seasons of the series as the science teacher at Hawkins Middle School.

Stranger Things returns to Netflix with season 4 part 2 on July 1.