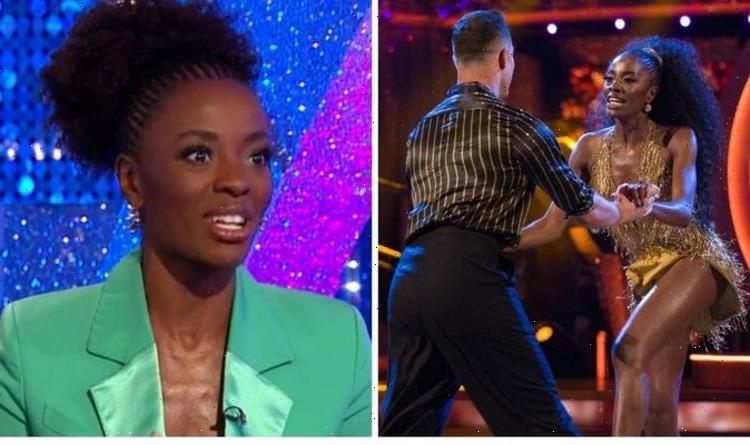 AJ Odudu thrilled Strictly Come Dancing viewers with her impressive Jive with partner Kai Widdrington. They scored 34 on week one of the show, but former professional AJ Pritchard has warned it won’t always be high scores. Despite achieving the best results of the night and one of the highest week one scores the show has seen, Pritchard explained Odudu could be in for more of a challenge as she and Kai take on a Foxtrot on Saturday night.

“Kai and AJ got eight, eight, nine, nine, in their Jive,” the 26-year-old commented. “It was really enthusiastic.”

He continued: “But it’s going to be harder with the slow dances for them.

“I’m quite excited, I think they’ve got a Foxtrot, which is a very hardcore dance.

“It’ll be an interesting contrast from that extremely quick Jive, which is usually easier to hide a lot of problems, to a very slow dance.

“So it’s a lot of pressure on them I feel like, but hey, we all love pressure and I know Kai is going to thrive under that pressure.”

Will Odudu be able to meet the standards of the Foxtrot and remain at the top of the leaderboard?

The television presenter will surely be listening to Pritchard’s warning as she hopes to win Widdrington’s first season of Strictly.

Pritchard took part in four seasons of Strictly Come Dancing before quitting ahead of the 2020 series and knows exactly what it takes to get to the final.

In his first year on the show in 2016, he came fourth place with Olympic artistic gymnast Claudia Fragapane.

He went on to reach the semi-finals in the proceeding two years, and made it to week 10 in his last competition in 2019.

While Pritchard took a step back, he told Express.co.uk, through William Hill, he would be open to a return.

He admitted: “I don’t think I would make a comeback in the same capacity as a professional dancer.

“But then again, if they suddenly call me right now because somebody dropped out because they had to kind of isolate because of Covid, I’m sure if they said ‘Do you want to dance this weekend?’ I’d be like, ‘Yeah, of course, I’d love to dance weekend.’

“I’m a professional dancer, it’s in my blood. I love to perform.

“But yeah, it’s kind of exciting and I think the spontaneity if you don’t know what’s happening in the moment.”

Since leaving the show, Pritchard has gone on to take part in 2020’s I’m a Celebrity…Get Me Out of Here!

Meanwhile, Odudu’s odds ahead of week two are are currently placed 9/2 for an overall win of the series.

Currently, Rose Ayling-Ellis is the favourite to win, with odds of 3/1 following the first week.

Rupert Adams, Spokesperson for William Hill, said: “Sara Davies didn’t fare too well on her Strictly debut last week and after being bottom of the leaderboard, we make her the 2/1 favourite to be eliminated first.

“The odds suggest it’s a straight fight between the two celebrities who struggled most last week with Ugo Monye, only a point above Davies last week, the other leading elimination candidate at 9/4.”

AJ spoke to media through gambling company William Hill. Strictly Come Dancing continues on Saturday at 7pm on BBC One.