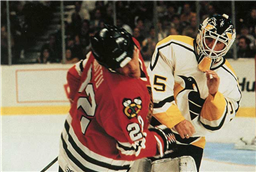 Dallas Jackson, best known as writer-director-producer of Blumhouse’s urban slasher Thriller (2018), begins filming his sophomore project this week in Winnipeg as production begins on Welcome to Sudden Death for Universal 1140 and Netflix. Netflix has scheduled the film for June 2020 release.

Van Damme portrayed a fireman who interceded when terrorists snatch the U.S. Vice President during the seventh game of the NHL Stanley Cup. The 1995 film was produced and written by Howard Baldwin and Karen Elise Baldwin, the owners of the Pittsburgh Penguins at the time.

The 103rd season of the National Hockey League will culminated with the Stanley Cup Finals, which begin in late May 2020 and conclude in early June 2020.

Griff First is producing Welcome To Sudden Death for Universal 1440. VP Share Stallings is overseeing for the division.

Jackson is repped by Josh Kesselman at Thruline Entertainment, APA, and attorney Darren Trattner. White is repped by Gersh and Zero Gravity Management, and Owen by UTA and 723 Productions.