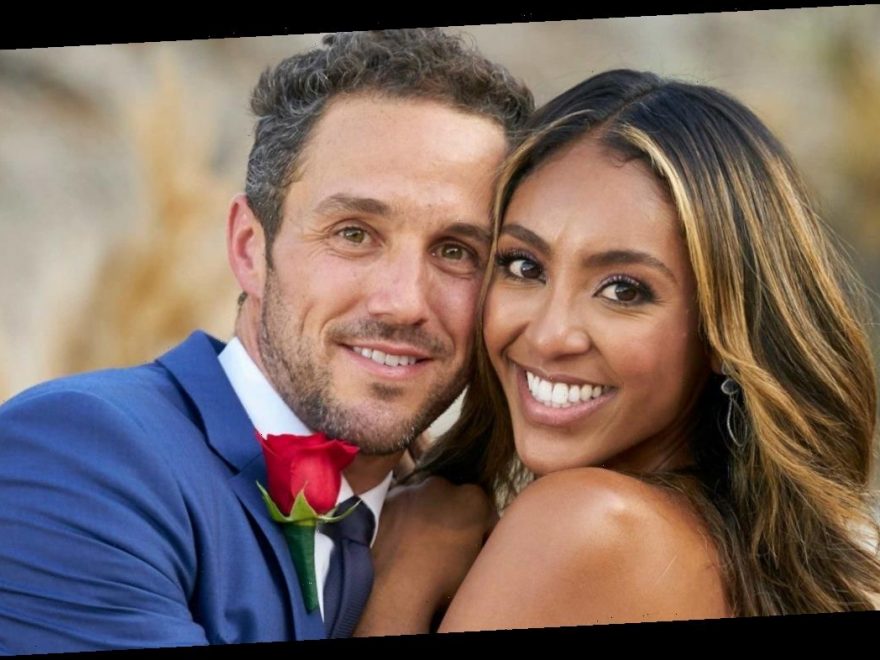 Remember that time Tayshia Adams posted on Instagram while wearing an engagement ring? Well, despite her trying to downplay the situation, it actually was her Bachelorette engagement ring — and she was totally freaking out after accidentally posting with it on.

“I guess I can come clean now,” Tayshia told ET’s Lauren Zima on Wednesday, with fiancé Zac Clark by her side. The 30-year-old sported the ring while making herself coffee on her Instagram Story earlier this month, and then told Ellen DeGeneres that she “likes to wear diamonds all the time.”

“I actually was freaking out. I was screaming, I was running all throughout the house,” Tayshia admitted. “He was with me, obviously, and it was a panic. But also at the same time, I kind of just played it off and it kind of just went away.”

Zac joked that he “actually got to see her in crisis,” and now, Tayshia can’t help but laugh about the situation.

“Honestly, who doesn’t drink their coffee in the morning and have a couple diamonds on?” she quipped. “Doesn’t every girl do that? No?”

After her Bachelorette finale aired on Tuesday night, Tayshia is now free to wear her 3.5 carat Neil Lane sparkler all the time. The episode kicked off with three men still in the running for her heart — Zac, Ivan Hall and Ben Smith — and while she called Ivan “perfect” and brought Ben back from elimination, Tayshia said that she pretty much knew Zac was the one after his hometown date.

“We felt it pretty early on,” she shared. “But at the same time, I feel like we were both hesitant to acknowledge it, just because it’s like, ‘Hold on a second, this is happening way too fast. Are we really like, is this real? Is it just the situation?’ And I think it was during his hometown date that we were just like, ‘It’s undeniable. It was just screaming at us at that point.”

“Once we got to the family piece of it, it was on,” Zac confirmed.

Tayshia said goodbye to Ivan after his fantasy suite date, noting to ET that the religious differences she cited were just one reason she knew he wasn’t her future husband. She eliminated Ben after he met her family, realizing her heart was totally with Zac.

“It was just what I pictured my life looking like in five, 10, 20 years, and who I saw as possibly being the father of my children, and just who was most compatible with me, who meshed well with my family,” Tayshia said of her decision. “There’s so many factors that go into it, and all the guys are amazing, but I just — I had a connection with Zac that I don’t think I’ve experienced with anybody else. And it just — sometimes you just want to fight those feelings because it’s too good to be true, but at the same time, it was just slapping me in the face, essentially.”

Tayshia’s dad, Desmond, notably warned her not to make the “biggest mistake of her life” during the finale, but as Tayshia revealed, he’s fully on board with Zac.

“I don’t think my dad has ever acclimated to someone as quickly as he has to him,” she shared. “He adores him and I’m really, really happy about that, because my dad is a tough cookie to crack at times. He’s been really welcoming to him.”

As for the future, Tayshia, 30, said she’ll be living a bicoastal lifestyle for a bit, visiting Zac, 36, in New York and keeping her place in Orange County, California.

“We’re going to just really take it slow, but enjoy this special time in our lives and know that without this solid foundation and, you know, learning all there is to learn about each other — everything else will fall into place,” Zac expressed.

The couple already knows a lot about each other, with Zac getting candid about his past addiction issues on his first one-on-one date with Tayshia. He celebrated nine years of sobriety on their last date before getting engaged.

“The reason those conversations happen is because Tayshia is Tayshia,” he said of his emotional reveal, as well as other serious conversations about race and mental health Tayshia had with other contestants like Ivan and Ben. “People felt comfortable to bring things to the table, and it’s a testament to her. I mean, I know for me, my experience, if I wasn’t comfortable sharing with her, I wouldn’t have shared some of the things I did.”

Fans appreciated seeing these topics broached on the series, and Tayshia added that she hopes it becomes more common within the Bachelor franchise.

“I think the world needed it,” she said. “It’s been such a tough year, and people are looking for companionship and something to relate to. No one’s looking for the perfect life picture anymore. It’s about being real and relatable.”

Tayshia also encouraged contestants and leads to “be honest.”

“If you’re feeling like you want to know more about their lives, ask the questions. Just the sense of security you can give to somebody, just being like, ‘I’m here for you and your story matters to me,’ and just creating that level of trust, I think allows people to open up,” she shared. “I think those conversations are so important to have, because down the road, they’re going to come out eventually, and you never know. It could really bond you guys. I feel like, just be honest and ask the hard questions.”

See more on Tayshia’s Bachelorette journey in the video below.