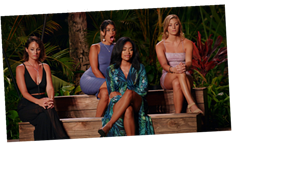 Dating reality series Temptation Island and Are You the One? use unconventional methods and techniques to help its contestant find true love. TBS’s The Big D incorporates both shows to create a new dating experiment that TI  and AYTO? fans will likely enjoy.

USA Network’s rebooted dating reality experiment follows four couples who have reached a crossroads in their relationship and want to explore other options.

Therefore, they split up and live with several single members of the opposite sex who are looking for love. While living in the villa, they mingle with the singles and choose someone for dates to explore a connection further.

Every week, their significant other watches a clip of their partner connecting with a single, sometimes sexually, at a bonfire.

By the end of the month, the couples reconvene a final time and determine if they want to end their relationship for someone they met on the island, leave single, or get back together.

‘Are You the One?’ uses games to help forge connections

MTV dating reality competition series features a group of young men and women who “suck at love” and want to find their “perfect match.”

Before the show, the contestants are paired together using a matchmaking algorithm and must identify their predetermined partner.

Every week, the group pairs off and competes in games to strengthen their connection by learning more about their partner. The winners then receive a getaway date and are eligible to get voted into the Truth Booth by the rest of the group.

Following the dates, the couple who received the majority votes enters the Truth Booth, determining if they are a perfect match. If so, they spend the remaining time in a Honeymoon Suite.

If not, they re-enter the house and try again. The couples then participate in weekly ceremonies where they sit next to someone they believe is their perfect match.

After “locking in,” beams light up to determine how many correct matches they have without revealing who the couples are. Following 10 weeks, if everyone correctly identifies their partner, the cast splits a million-dollar prize.

‘The Big D’ combines elements of ‘AYTO?’ and ‘Temptation Island’

Like Temptation Island, TBS’s upcoming reality dating competition series The Big D follows couples as they search for love. However, these pairs are recently divorced.

From the creators of AYTO and hosted by The Bachelorette stars and engaged couple JoJo Fletcher and Jordan Rodgers, the former duos will identify their relationship issues with their exes through exercises while mingling with singles who are also looking for love.

Every week, a contestant deemed not ready for a relationship is eliminated. Fletcher and Rodgers, who also found love on television, called their decision to participate in the show “a no-brainer” in a statement to Deadline.

Rodgers first got down on knee during the season 12 finale of The Bachelorette in 2016. He proposed again three years later, and they planned on tying the knot in June 2020.

However, they had to postpone the wedding until May 2021 due to the COVID-19 pandemic.

With several of the main elements from AYTO and Temptation Island, including a bit of MTV’s Ex on the Beach, fans of the dating shows will likely enjoy TBS’ new series.