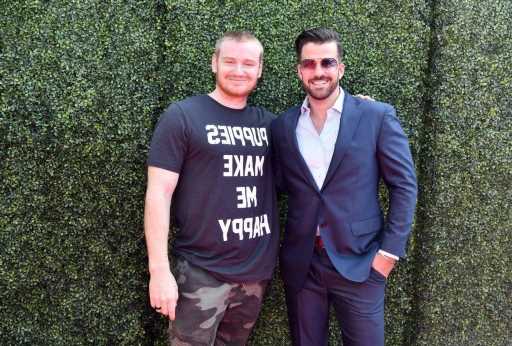 Fans of MTV’s The Challenge know all about the legendary feud between Johnny “Bananas” Devenanzio and Wes Bergmann. The two rivals played the game together for years, and finally, they came together for The Challenge: Total Madness to attempt to dominate as a team. Now, it looks like the iconic duo is reconvening once again, but this time, on a different show.

Are Wes Bergmann and Johnny ‘Bananas’ Devenanzio friends? They have history on MTV’s ‘The Challenge’

Wes and Johnny “Bananas” have quite a history on MTV’s The Challenge. As for how their rivalry started, it began with The Ruins in 2009. Johnny and Wes were originally on the same team, but Johnny’s loyalties remained closer with Kenny Santucci and Evan Starkman. Kenny and Evan eventually targeted Wes. Johnny followed Kenny and Evan, breaking his alliance with Wes and kicking off their feud.

The two reconciled a few times over the years, but they continued to backstab each other on The Challenge, resulting in the same legendary rivalry. Finally, in season 35, Total Madness, they decided the only way to get to the end and win the money was by getting there together. They put their rivalry aside and played the game together for the majority of it, and they left the game friends.

“So I think all this time, and all these years, and everything that’s been said, I think at the end of the day, Wes Bergmann just wanted to be my friend,” Johnny said on the Challenge Mania podcast. “And I think coming into this season and me really laying it on the line and being like, ‘Wes, you have my heart and you have my trust,’ I think that that’s, deep down, what he always wanted.”

Wes and Johnny ‘Bananas’ will appear in a TV event

MTV’s The Challenge fans can rejoice, as Johnny “Bananas” and Wes will come together for a TV event. The Twitter account for 1st Look posted the news on June 1, 2021.

“You asked, we listened,” the tweet notes. “@WestonBergmann is joining @johnnybananas on @CelebSleepover this fall! What do you want to see them do? What questions do you have for them? Reply to this tweet and we’ll make it happen! #celebritysleepover.”

Celebrity Sleepover is one of the projects Johnny’s involved in after winning Total Madness. The show, which People notes was expected to run for just four episodes, includes celebrity interviews, games, and drinks — all in Johnny’s living room.

“As my fans know, I’m always up for a good challenge, and talking to celebrities from the comfort of my living room and theirs, was the perfect distraction during my time at home,” the Challenge star explained. “This show has everything — it’s fun and it’s like nothing else in late night — and it’s PJ-rated. Who else can say that!”

Will Johnny ‘Bananas’ return to ‘The Challenge’? Will Wes?

So, will this reunion between Johnny and Wes foreshadow more to come from the duo? Fans would love to see either of them on MTV’s The Challenge once again, as neither of them competed on season 36. But there’s currently no indication either of them will return to the game anytime soon.

After season 35, Bergmann noted he was taking a break from the series. And Johnny’s talked about whether he’ll come back. “I’m 20 seasons in and I’d be lying if I said that I’m the same person physically and mentally as I was before I started this journey 15 years ago,” Johnny explained to People after Total Madness. “I don’t say this lightly, but every season that I go on The Challenge, I feel like a little piece of me dies.”

Neither of them made it to the rumored cast listings for The Challenge Season 37. But fans would certainly love to see them on a season of All Stars. We’ll wait and see what they decide.