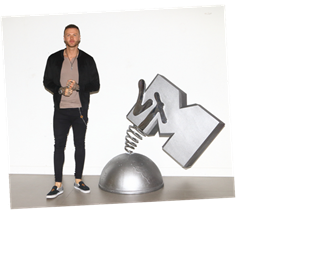 Six-time competitor and last season finalist Kyle Christie returned for The Challenge: Double Agents, paired with Kam Williams for several weeks. However, after CT Tamburello “stole” her, he was relegated to the bottom of the house. When he received power, the UK native didn’t make a move and instead allowed Cory Wharton to compete for his gold skull. Following the episode, Kyle opened up about his gameplay and revealed his biggest mistake from the season.

During The Challenge 36, six-time competitor Kyle Christie teamed up with veteran Nany González. However, the two didn’t want to work with each other and planned on splitting when given the opportunity.

The majority of the house threw Kyle into the first men’s elimination against rookie Joseph Allen. After the UK native came out on top, he swiftly changed partners, picking Kam Williams.

They worked well together as the pair remained safe and won a daily mission. Yet, they voted differently at times as Kyle aligned with CT Tamburello.

However, his alliance member “stole” Kam without telling him first. Without the protection of Kam and her numbers and no longer working with CT, the UK native became one of the most vulnerable.

Kam and Leroy Garrett stopped working with Kyle after they split

As the weeks went by, veteran Cory Wharton realized he was running out of time to compete for his gold skull. Therefore, he asked several competitors to throw him in and admitted he wanted to face Kyle, a player he considered the biggest layup.

Working closely with Cory, Kam and her boyfriend veteran Leroy Garrett tried to prevent Kyle and his new partner Aneesa Ferreira from winning the daily mission.

Knowing they would get thrown into elimination, the team fought hard and ended up walking away with the victory.

The double agents then sat back and allowed the house to figure out who they would throw in against Cory, and the majority decided on four-time winner Darrell Taylor.

During the official aftershow, host Devyn Simone asked Darrell about the house voting him into elimination. He admitted he didn’t see it coming but didn’t feel “betrayed” by Leroy or anyone else because they were nearing the game’s end.

Aneesa explained she wanted the house to choose because she already knew she and Kyle would say Cory’s name and didn’t want to pick someone. Additionally, CT noted they made a good move because it got “no blood” on Aneesa and Kyle’s hands as they only had to name Cory, someone who already wanted to go into elimination.

When asked why he didn’t blindside Leroy, the UK native explained he sided with Aneesa because he didn’t have any allies in the game at the time. However, he called it his “biggest regret” and wished he would have pitted Leroy against Darrell.

The move would’ve gotten rid of a heavy hitter and blocked Cory from getting his gold skull. The Challenge 36 airs Wednesdays at 8/7 Central on MTV.