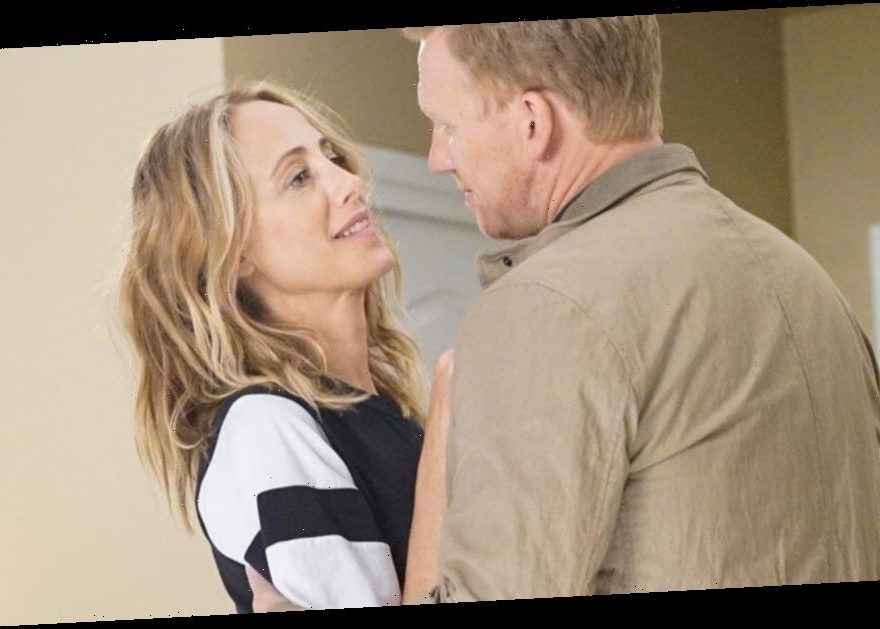 We’ve waited months for the Grey’s Anatomy Season 17 premiere to find out what happened to Owen Hunt (Kevin McKidd) and Teddy Altman (Kim Raver). The couple left fans hanging after Owen discovered his fiancée’s affair with Tom Koracick (Greg Germann). Then in the new Grey’s Anatomy and Station 19 crossover trailer, ABC teased a moment between Teddy and Owen that will be heartbreaking to watch.

Everything fell apart in the Grey’s Anatomy Season 16 finale. Teddy and Owen planned to get married. However, Teddy was still sleeping with Tom, even hooking up with her ex hours before the wedding ceremony. The cheating pair also left Owen a voicemail of their encounter by accident.

In the end, Owen uncovered the truth about Teddy and Tom. Then he backed out of the wedding, telling his mom he was called in for a last-minute surgery. He also failed to mention anything to Teddy. So the cardio god was left alone with her own thoughts.

After the finale, Shondaland fans wondered how Owen will confront Teddy about cheating. And while we patiently wait for the three-hour crossover premiere on Nov. 12, recent promos hinted at what happens next. In October 2020, ABC dropped the latest Grey’s Anatomy Season 17 and Station 19 Season 4 trailer. Then midway through the teaser, Owen calmly speaks with Teddy.

“If there’s something you need to tell me, now is the time,” Owen says. Meanwhile, Teddy stares back at her partner with a blank expression. But once she’s alone, she starts to cry.

Now, this Teddy and Owen moment flips the previous September promo on its head. In the latest teaser, Owen almost feels defeated when confronting Teddy. But in the old preview, Teddy pleads to her partner, and Owen is clearly furious.

What will happen to Teddy and Owen in the ‘Grey’s Anatomy’ Season 17 premiere?

As you may know, the Grey’s Anatomy Season 17 premiere will not start where we left off. The new season begins with a time jump, and we’ll see the doctors at Grey Sloan Memorial a few weeks into the coronavirus (COVID-19) pandemic.

“We’re going to start the season about a month and a half [into] full COVID,” Giacomo Gianniotti (Andrew DeLuca) told Entertainment Tonight in August. “So it’s going to take place a little beyond where we left off in the last season.”

Then in an interview with TVLine in September, showrunner Krista Vernoff confirmed the Grey’s Anatomy Season 17 premiere will include moments that were already shot ahead of the Hollywood shutdown in March. There will also be flashbacks to catch viewers up to speed after the time jump. So it’s likely we’ll find out exactly what happened between Teddy and Owen between the finale and premiere.

“We are not working to protect stories we had [planned] for the end of Season 16.  That said, you will get to see some of the immediate moments from where we left off,” Vernoff said. “There was great material that we had already shot but did not get a chance to air. We found a way to build it into our premiere.”

Meanwhile, Vernoff told TV Insider that Owen is “wrecked” before the time jump. It also seems the same will go for Teddy, just in a different way. “Teddy is wrecked the way people are when they ruin their lives,” Vernoff said.

Of course, the Grey’s Anatomy and Station 19 premiere trailer teased drama beyond Teddy and Owen. At the start of the promo, Meredith Grey (Ellen Pompeo) sets the tone. “Sometimes, we all need saving,” she says.

Well, it certainly looks like the Grey’s Anatomy and Station 19 premiere will be explosive. So stay tuned. New episodes begin on Thursday, Nov. 12.