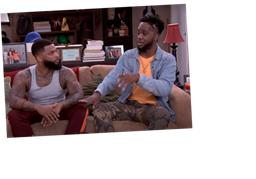 Speaking to the virtual CTAM Winter 2021 Press Tour on Thursday, Dismuke said he hoped a renewed industry support for Black creatives and stories would usher in renewed excitement for Allblk. “While we’ve updated our brand, what remains unwavering is our commitment to representation and identifying new and emerging talent both in front of and behind the camera,” Dismuke said.

First out of the gate is “Millennials,” a new multi-camera sitcom executive produced by prolific TV producer Bentley Kyle Evans, long a legend in the community for co-creating foundational comedies such as “Martin” and “The Jamie Foxx Show,” among others.

“I think it’s a very relatable show, you saw ‘Living Single’ back in my heyday, this is the flip of that,” said Evans. “The Black experience from a male’s perspective hasn’t really been seen in a fellowship kind of scenario, we wanted to give a message of what that black experience was like, like that dorm room experience. With this ensemble piece, I  think we’re able to capture that in a very unique way.”

According to the official synopsis, “Millennials” “explores the lives of four 20-something roommates — a business student, a YouTuber, a college dropout, and a personal trainer –—and their aspiring actress neighbor across the hall, as they navigate the chaos of being young, finding success, and finding themselves in the city of Los Angeles.”

The series features a trio of grown-up child actors that includes “That’s So Raven” star Kyle Massey, Aaron Grady (“Everybody Hates Chris”), and Philip Bolden (“Are We There Yet?”), alongside relative newcomers Teresa “Topnotch” Celeste (“Wild ‘n Out”) and Keraun “King Keraun” Harris (“Insecure”).

The lively bunch were on hand to talk about their characters, and were particularly excited to have Evans at the helm. “Bentley is a sitcom legend, so for him to have any belief in us at all and put his energy and effort towards this show, that means a lot,” Grady said. “You are a legend in the Black community.”