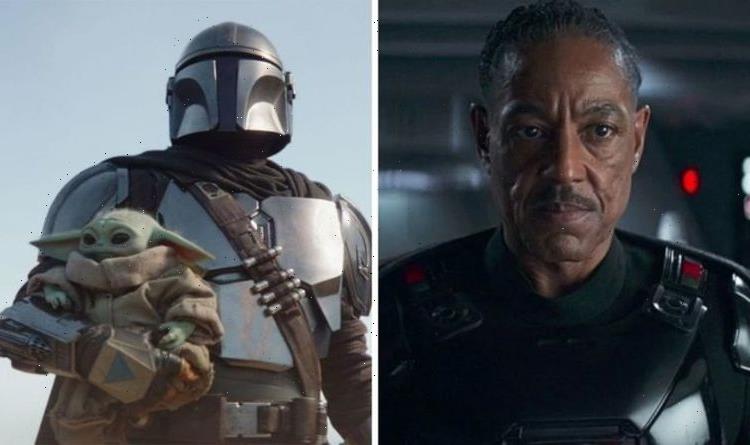 The Mandalorian: Disney+ recaps events of the first series

After the huge success of the first season of the Star Wars spin-off fans can now look forward to the third instalment of The Mandalorian. Ahead of its upcoming release on Disney Plus, actor Giancarlo Espositio unveiled a huge update about the production, ensuring viewers that there is plenty more adventure awaiting them.

The Mandalorian was a major spin-off for the Star Wars franchise and season one became a huge hit after its release in 2019.

It featured a huge appearance from Grogu also known as Baby Yoda, who was being hunted down by Mando (played by Pedro Pascal), a hired lone bounty hunter in the outer galaxy.

He later went against capturing Grogu and went on the run in hopes of protecting him.

Other original characters such as Ahsoka Tano (Rosario Dawson), Bo-Katan Kryze (Katee Sackhoff) and Boba Fett (Temuera Morrison) also made a surprise appearance in the series.

With the excitement that surrounded season two, the loyal viewers were left in anticipation about a potential third season.

Moff Gideon star Giancarlo Esposito recently opened up and revealed that filming for the upcoming instalment of the series was starting soon.

During an appearance at GalaxyCon Raleigh, the actor was asked for The Mandalorian update, to which he replied: “They just finished shooting Boba Fett and soon they will start on [Mandalorian] season 3.”

As well as updating fans about the upcoming season, he also offered up information about Boba Fett, another Star Wars spin-off.

Elsewhere, it was revealed that the series would be released in December before The Mandalorian.

Giancarlo also assured fans that Mando star’s current role in HBO’s The Last of Us, would not impede on his Star Wars schedule.

He added that Mando actor Pascal had helmeted doubles to do the physical acting, which ensured that he didn’t have to show up on set.

As Pedro was able to record his vocal performances elsewhere, it worked well with his other commitments to HBO.

When Giancarlo was asked if fans would finally get to see The Mandalorian without his helmet in season three, he responded: “I can’t speak to that, I mean, I know he’d love to be more off the helmet, but you know, his job is to be in the helmet.”

It’s been confirmed that Cara Dune would definitely not be returning to the franchise after sharing offensive posts on social media.

Despite featuring in the last two seasons, the actress was also dropped by her representation at the time.

As Baby Yoda’s upbringing has already been explored, it’s yet to be revealed what the third season would entail.

With the filming of season three starting soon, it’s safe to assume that it could hit screens in early 2022.