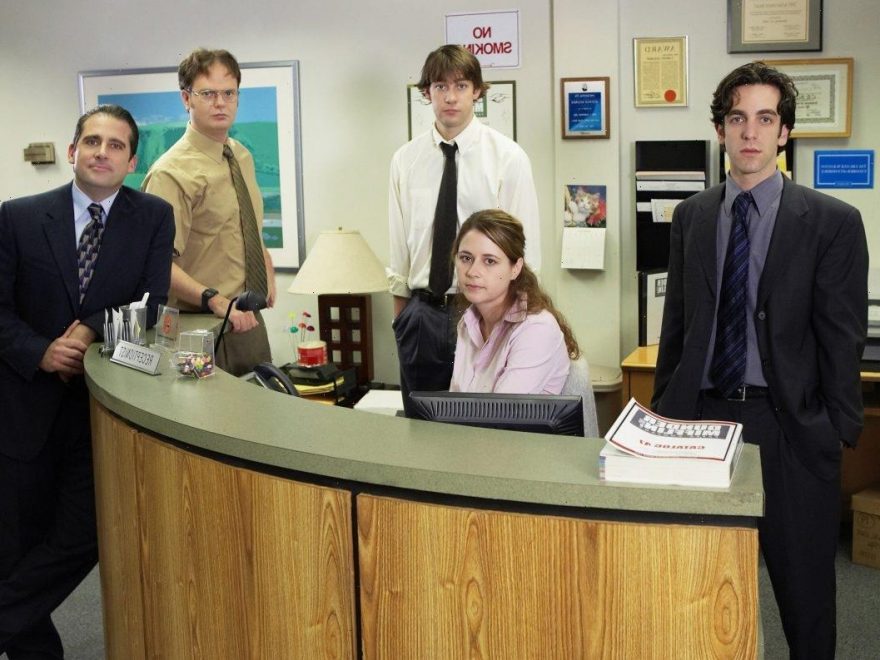 Filming The Office might have looked like all fun and games for the cast. But behind the scenes, there were a few rules in place to ensure the show could be as funny as possible. Discover five rules the cast of The Office followed while working on the NBC comedy series.

The cast of The Office did a lot of their own research to become their characters on the show. For example, Jenna Fischer put together a “Book of Pam” detailing aspects of her role. She came up with a backstory for Pam that includes her motivations, likes and dislikes, and more.

BJ Novak also took character research very seriously behind the scenes. For “The Dundees” episode from season 2, Novak took Fischer out for drinks to observe her. In this way, the actors got a sense of how Pam would act if she got drunk.

“After the first two drinks, I was like, ‘Oh, I just feel buzzed and a little dizzy,’” Fischer explains during an episode of the Office Ladies podcast. “I was laughing a lot, so that’s why I had Pam do all of those laughs in the episode.”

Krasinski also dove into his role by interviewing a few paper salesman. He also took a research trip to Scranton after he was cast. During that trip, Krasinski filmed footage of the town, most of which is featured in The Office’s title sequence.

‘The Office’ spoilers had to be avoided

Like any good show, The Office cast was charged with keeping specific plot points a secret. Generally speaking, the cast learned about certain storylines on a need-to-know basis.

Perhaps the biggest secret on the set of The Office was Steve Carell‘s return as Michael Scott in the series finale. Showrunners kept the cast in the dark about Carell’s return and had Creed Bratton read his lines during rehearsal.

‘The Office’ writers, the cast, and showrunners always brought their best ideas to set

Working on The Office was a very creative environment. Most of the time, the 22-minute episodes started out with a 40-minute run time. Showrunners had so many good ideas to work with, but they had to pick the very best to make every episode as funny as possible.

How did they choose? Director Greg Daniels had one rule. “Whatever’s funniest wins,” editor David Rogers explains in a 2013 interview with Office Tally. “Doesn’t matter if a writer wrote it or an actor made it up on the spot. We go with what’s best.”

‘The Office’ cast had to bring their own paperwork

Showrunners had The Office actors bring their own paper to set to make Dunder Mifflin’s Scranton branch look as authentic as possible. Office star Brian Baumgartner, who plays Kevin Malone in the series, brought his bills to set. His goal was to have things on his desk that were accurate to the role. As an accountant, paperwork with numbers on it made sense to the actor.

Improvising was a must on the set of ‘The Office’

The Office had a solid team of writers working behind the scenes. Still, the cast had to be ready to improvise at a moment’s notice.

The cast of The Office would often improvise to create some of the show’s funniest scenes. For instance, the kiss Carell and Oscar Nuñez share in “Gay Witch Hunt” wasn’t in the script.

“Steve had an ability to understand subtext,” writer Jen Celotta explained on Baumgartner’s podcast An Oral History of The Office. As “one of the best moments of the whole show,” Carell’s kiss with Nuñez worked because “it was on story, it was on theme, and it was funnier than what was scripted.”

Stream episodes of The Office on Peacock.