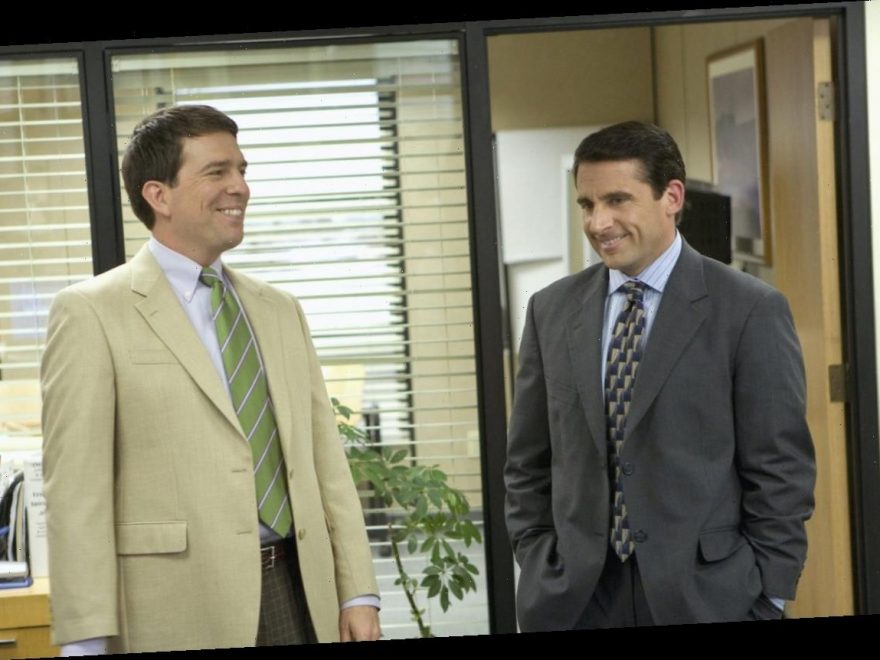 When Steve Carell left The Office, it created a dilemma — how could they fill the vacancy left by Michael Scott with someone who would keep viewers tuning in? While the show went with big-name actor James Spader, his Robert California character was supported by an internal candidate who landed the boss gig — Andy Bernard, played by Ed Helms.

Replacing Michael Scott was no easy task, as Carell had brought his immense talent to the role and provided a character who could make viewers both cringe and adore him.

During the Sept. 1 episode of An Oral History of The Office podcast, showrunner Paul Lieberstein explained how “the ratings were falling across the board” and they lost millions of viewers after Carell left.

They were left with a huge decision, as host Brian Baumgartner said the question in season 8 was, “What was The Office without Michael Scott?”

Jenna Fischer, who played Pam, explained, “This was the conversation. Who should be the boss?” The writers’ room was looking for opinions and Baumgartner said that there were “two paths” they could try after Carell: “Rely on the existing ensemble or bring in a big star.”

NBC, who had supported the show, had changed hands to Comcast, who wanted a big star to step in. The season 7 finale “Search Committee,” had a bunch of famous cameos before the new leader came in — Spader as Robert California.

Spader had just ended a run on Boston Legal, picking up two Emmys for that role and was a well-known movie star. He was a talented actor, but his style didn’t always match with the cast of The Office.

Rainn Wilson shared, “Spader is a great actor. He’s really one of the great character actors… He’s so present and interesting and odd and deep feeling. But just a very different skill set and his energy just didn’t fit.”

Who would be the new boss?

Interestingly, Robert California didn’t take Michael Scott’s place as a new manager and because of that “small distinction,” Baumgartner explained, “Robert California was not actually the regional manager.” This allowed the writers to find another replacement from the existing Dunder Mifflin employees.

Baumgartner continued, “They thought about a bunch of characters” for the gig and Lieberstein said that Jim or Darryl “were competent,” explaining, “it was just too boring. You needed someone who could make the mistakes.”

Why not Dwight? Fischer explained that his role is the one who “is always angling to be the boss but does not actually have the authority. If you make him the boss, then who is that guy?”

That lead the writers to choose Helms’ character, Andy Bernard. “I was thrilled,” Helms explained. “And super excited. And terrified.” Baumgartner shared that it “was a ton of pressure” to follow Carell.

Helms said he “meditated a lot” on the idea of “not trying to fill Steve’s shoes.” He added, “I’m walking in a different direction and I’m going be a little bit of a different thing here.”

“There was a sense that, even with Andy in that office as manager, that it wasn’t necessarily all on my shoulders,” Helms said of the show leaning on their ensemble.

“Elevating the character of Andy to become the boss presented its own problems,” Baumgartner explained, as “Andy was positioned to be bad at his job.”

Critic Emily VanDerWerff told Baumgartner, “Once Michael Scott leaves that show it has to become something different and it never quite figured out a way to become different in an interesting way. It’s tricky a thing to do when you have to replace the center of a show. I don’t think The Office managed it, but I don’t think any show ever has.”