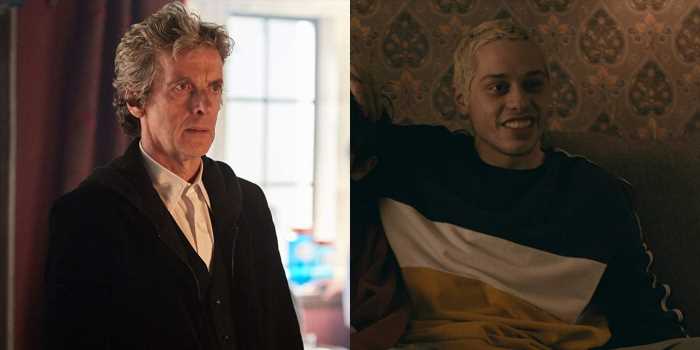 The casting for James Gunn‘s The Suicide Squad just gets more out-of-this-world with its latest recruit. Gunn’s follow-up to David Ayer’s 2016 Suicide Squad has tapped Doctor Who star Peter Capaldi in an undisclosed role. Potentially joining Capaldi in The Suicide Squad cast is a vastly different Pete: Saturday Night Live’s Pete Davidson is reportedly in talks to make a small cameo appearance as well.

With every Suicide Squad, you need a doctor. And The Suicide Squad has got a pretty good one in Doctor Who star Peter Capaldi, who has recently come off a three-season run as the titular time-traveling alien in the beloved BBC sci-fi series. Deadline broke the news that Capaldi has been tapped by Warner Bros. to join The Suicide Squad cast in an undisclosed role. Gunn’s superhero flick is also eyeing Pete Davidson for a “small cameo” that will be shot between breaks at Saturday Night Live, though that deal is still coming together.

Though the two share a similar first name, the casting announcement pairing of Capaldi and Davidson couldn’t be odder. Capaldi is a BAFTA and Oscar-winning actor and writer who has shown immense range in everything from prestige dramas and foul-mouthed comedies, while Davidson is a walking meme who still making inroads in his movie career outside of SNL. But these two additions only add to the eclectic gathering of actors making up the current cast of The Suicide Squad. Margot Robbie, Viola Davis, Jai Courtney, and Joel Kinnaman reprise their roles from the 2016 Suicide Squad, but Gunn has apparently been given plenty of freedom to cast as he wishes with new additions like Idris Elba in an undisclosed role, David Dastmalchian as Polka-Dot Man, Daniela Melchior as Ratcatcher, Flula Borg in a yet-to-be-confirmed part, Steve Agee as King Shark, Nathan Fillion, and Taika Waititi.

There are no details on which roles Capaldi or Davidson would play, though I hope they don’t saddle Capaldi with yet another typical uptight British authority figure role. As seen in his BAFTA-winning turn in The Thick of It and in his high-energy, high-emotion performances in Doctor Who (Capaldi is still the best actor to play the Doctor, fight me), it would be a waste to stick Capaldi in anything but a superhero (or villain) suit.