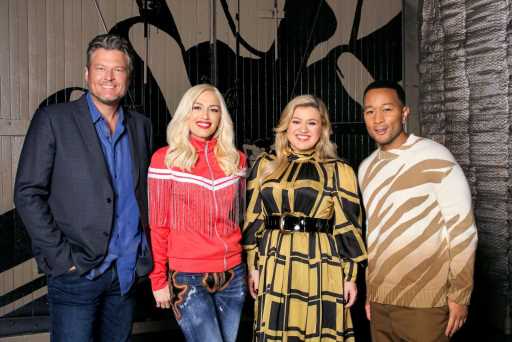 This season of The Voice had a big change with Adam Levine no longer on the show. It looks like the coaches have hit their stride, but it did take some time.

Gwen Stefani opened up about that adjustment and how Blake Shelton handled it. Find out why she said he was “off at first” and more.

A rare moment of tenderness. ❤️

Adam Levine has been a coach on The Voice since it premiered. He became very close to Shelton through that time and they had a playful feud. This made the news that he quit very surprising to fans but not to Shelton.

“I think we all knew, on the inside of the show, that he was ready to make a move,” Shelton told Entertainment Tonight. “For a guy like Adam, who is just — he’s the most ADD person I think I’ve met — for him to have even done it as long as he did without wanting to move on to the next thing, is amazing.”

He continued, “But I know he’s happy with his decision. Doesn’t mean I am, or any of us [are happy], but at least they were able to soften the blow a little bit and bring Gwen [Stefani] back.”

Fans could sort of predict what will happen with Stefani being back. However, there was one question around the new cast and their chemistry together.

Some wondered who Blake Shelton will feud with next

And how about a #HellRight to #TheVoice starting back up September 23rd! – Team BS

The big casting change made some wonder who Blake will feud with next? He has a playful friendship with Clarkson, then there is Stefani returning to the show.

A teaser of the season showed Stefani and Shelton fighting over a person who auditioned to join their team. “She put our relationship on the line for you!” Shelton yelled. “You’re personally responsible for breaking up one of America’s favorite couples,” said John Legend.

There was also a report that Stefani was asked to feud with Shelton in order to replace Levine. “Gwen is feeling pressure to fill very big shoes with Adam Levine leaving The Voice,” a source told Us Weekly. That meant fans should “expect Gwen to spar a bit with Blake.”

Stefani said Shelton was off at first without Levine

The new season of The Voice has started and fans are loving the coaches. However, it was a big adjustment to not having Levine on the show. Stefani said Shelton had to get used to it.

“It was funny to watch Blake without Adam; he was definitely off at first, he was off, like, ‘What’s happening? Nobody’s really messing with me much…’ Kelly definitely messes with him,” Stefani told Extra.

“I like to mess with him, too, ’cause it’s fun,” she admitted. Her goal this season is to beat the country singer. “It always feels good to beat Blake — he’s the O.G.”

Fans will have to keep watching to see which team will actually win this season.