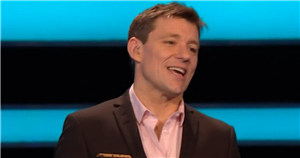 Tipping Point fans were in for a treat when they tuned into Friday's episode – after a stunning contestant joined the ITV game show to try her luck against the coin-pushing machine.

The latest batch of hopeful quizzers included retired police officer Nigel, IT help desk analyst Matt, flight operations officer Caroline and Trevlyn, but it was Trevlyn who seemed to catch the eye of the ITV viewers at home.

Brunette beauty Trevlyn, who is a church administrator from London, rocked up to the studio looking glam with her multi-colour floral top and bouncy, blow dried hair, and it wasn't long before the fans at home were distracted by her dazzling looks.

Many viewers immediately took to social media to compliment the pretty player, with many swooning over her on Twitter.

One swooning viewer commented: "Helooo, Trevlyn!" before attaching a huge set of love-heart emojis to express their delight at spotting the gorgeous player.

A second user branded her a "beautiful lady", despite being rather confused by her unique name.

A third was also left puzzled by her name and penned: "trevlyn?!"

However, it was clear smiley Trevlyn won over plenty of admirers, and a fourth fan added: "I hope Trevlyn wins, she seems to be the kindest".

Unfortunately for Trevlyn, she had a rocky ride during throughout the game and despite bagging £250 in her opening round she was forced to face off with Nigel and Caroline in a sudden death bout as all three of them sat on £250 at the end of the first round.

Luckily, she made it through to round two after beating Nigel who was subsequently kicked off the show but she then faced yet another sudden death face-off against Caroline as they were tied up again – with £400 each – so both ladies faced another sudden death showdown.

Host Ben Shephard pointed out: "Nothing separates Caroline and Trevlyn so it's sudden death again, ladies.", prompting the players to laugh as the competition heated up.

Their big question was: "Which word describes both an elastic piece of coiled metal and the season between winter and summer".

Flight operations officer Caroline was lightning-fast on her buzzer though, and she correctly answered "spring" which meant Trevlyn was sent home packing.

Viewers were certainly disappointed to see the back of poor Trevlyn and one heartbroken user penned: "And she's gone….."

A second Trevlyn was sympathetic and wrote in: "Hard luck Trev".

Matt on the other hand managed to bag himself a whopping £10,000 after securing the jackpot counter in the final round as he beat Trevlyn's rival Caroline, before he also took home a wine-tasting session for two at a lush vineyard.

The IT help desk analyst had said he would like to spend the winning money on some far-away travels to places like New Zealand and Japan, so it looks like his cash prize will see him jetting off in no time.