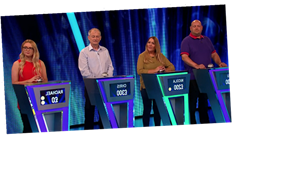 Nicola was one of four contestants taking part in the competition, but she lost out on some potential cash due to the void counters rule.

The player put her counter into the machine, but sadly none of them fell out.

However, once her turn was over, two counters proceeded to topple off of the first counter and sent an array of them over the tipping point.

These were ambient drops as they occurred out of play, which meant the counters were voided and didn't count.

One said: "Harsh on Nicola there!"

While another wrote: "Very harsh on the voided counters".

A third penned: "Ambient drop and the counters have fallen!", with three laughing faces.

This is a live TV story and is constantly being updated.