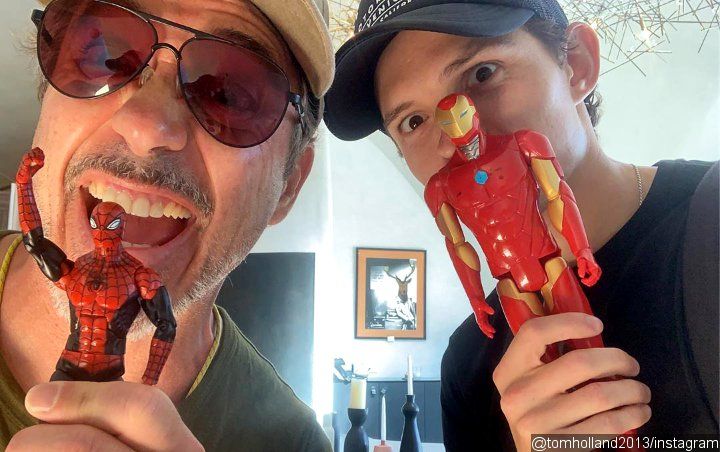 The ‘Spider-Man: Far From Home’ actor shares on Instagram photos of him hanging out with his on-screen mentor after it’s confirmed that Disney has parted ways with Sony.

AceShowbiz –Tom Holland isn’t letting the Spider-Man debacle get in the way of his friendship with his MCU co-star. The British actor has just reunited with Robert Downey Jr., who played Tony Stark a.k.a. Iron Man, after Sony Pictures announced that it has parted ways with Walt Disney Studios and Marvel Studios.

The 23-year-old took to Instagram on Thursday, August 22 to share photos of him hanging out with his on-screen mentor. They seemed to be celebrating their achievement after completing a hike by taking several selfies.

“We did it Mr Stark!” Holland captioned the pictures, calling Downey Jr. by his Marvel character’s name. The two made more references to their characters as the “Iron Man” actor held a Spider-Man action figure, and Holland showed off an Iron Man toy.

Fans got emotional upon seeing the pictures of their reunion, not only because they will likely never see them reuniting again on-screen, but also due to the fact that the future of Holland’s Spider-Man is now in jeopardy following the end of Sony’s agreement with Disney.

“how can this be so cute,” one wrote in the comment section. Another gushed, “THIS PHOTO CLEARED MY SKIN.” A third fan reacted, “okay, I know you saw this but this post melts my heart.” Someone else refused to admit that he/she’s crying over the photos, “I’m not crying, you’re crying.”

Holland has not publicly addressed Disney and Sony’s decision to part ways. Sony released a statement on Tuesday, August 20, “Much of today’s news about Spider-Man has mischaracterized recent discussions about Kevin Feige’s involvement in the franchise. We are disappointed, but respect Disney’s decision not to have him continue as a lead producer of our next live action Spider-Man film.”

Sony continued in the statement, “We hope this might change in the future, but understand that the many new responsibilities that Disney has given him – including all their newly added Marvel properties – do not allow time for him to work on IP they do not own. Kevin is terrific and we are grateful for his help and guidance and appreciate the path he has helped put us on, which we will continue.”

Meanwhile, Holland’s “Avengers: Endgame” co-star Jeremy Renner has pleaded with Sony to let Spider-Man rejoin the MCU. “Hey @sonypictures we want Spider-Man back to @therealstanlee and @marvel please, thank you,” he wrote on Instagram, tagging other MCU stars including Downey Jr., Chris Hemsworth and Zoe Saldana.