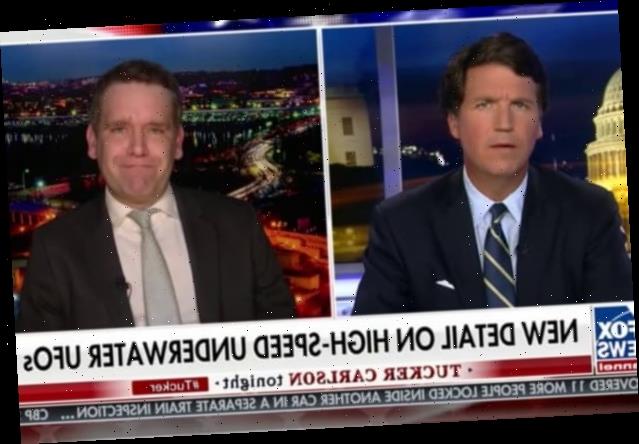 “Let’s be honest, this is this is really out of the realm,” Tucker gushed on his show Tuesday night

As he so often does, Tucker Carlson talked about aliens and UFOs again Tuesday night. But this time there’s a new wrinkle: these UFOs can fly not just in the air, but also underwater.

“A new report from American intelligence confirms something that’s been rumored for a while. Late last year a US Navy F/A-18 fighter jet took a very clear photograph on a personal phone of a triangle-shaped unidentified aerial phenomena,” Tucker said excitedly.

“That vehicle, whatever it was, appeared to be operating with a propulsion system that generated no visible exhaust. Hard to see how that can happen. The setting likely places the UFO near a US nuclear-powered aircraft carrier. That shouldn’t be surprising because a string of UFO sightings have involved nuclear reactors and warheads.”

But Tucker isn’t just here for the regular UFOs. He wanted to talk about the “underwater UFOs, which behave in ways that science can’t explain.”

To that end, Tucker had on Tom Rogan from the right-wing Washington Examiner to talk about a report he wrote two weeks ago that has gained no traction among respected news outlets.

Rogan began by pointing that out himself in a way. “Thanks for covering this because not enough journalists, I think, do,” he told Tucker.

He then summed up this alleged incident for Tucker.

“The late 2019 incident essentially involved a US carrier strike group, as with the incident in 2004 and ’15, doing its workups on pre-deployment, preparing to go abroad and do the missions that the Navy are assigned,” Rogan said.

“And the pilots are flying off the coast off the Atlantic seaboard and see essentially a black triangle, white sort of indicator lights on its peripheral tips coming out of the water very quickly and then accelerating at extremely high speed at about a 90 degree angle. And one of the pilots took a photo, very good photo I’m told by multiple sources, on his iPhone.”

“It came out of the water?” Tucker said “There have been over the years a number of reports of unidentified underwater vehicles moving in ways that don’t make any sense at all. Tell us what you know about that.”

Rogan then told Tucker that the reason the Navy doesn’t publicize this stuff is because they don’t want “either China or Russia in particular to figure out whatever these vehicles are…figure out how they do what they do.”

“They maneuver in ways that would essentially render a submarine or an aircraft carrier or any, quite frankly, military warship extremely vulnerable to attack,” Rogan told Tucker. “This is some special stuff whatever it is.”

“Well, a bullet doesn’t travel hundreds of knots an hour underwater, for long. I mean, I don’t think any human made object ever has — we’ve never imagined something like that,” Tucker gaped, though the genre of science fiction might disagree with that statement.

Rogen then wrapped up his spiel.

“What these things can do, in air, under water, in space, at least in low orbit, are beyond any capability that we can identify with an earth nation, either in platform, something that a military is showing, or is in development,” he told Carlson.

“Or has even been conceived of,” Tucker replied. “I mean, let’s be honest, this is this is really out of the realm.”

Earlier this year, Fox News lawyers argued before a judge that Tucker Carlson is not a credible source of news. And the judge agreed, saying that “any reasonable viewer” would not take him seriously.

You can watch the quoted portion of Tuesday’s episode of “Tucker Carlson Tonight” on Fox News in the video embedded up at the top of this article.