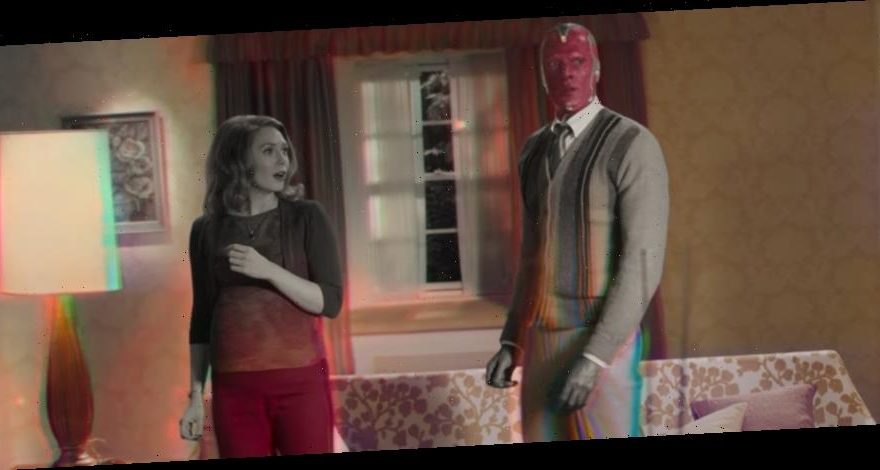 Wanda Maxmioff (Elizabeth Olsen) and Vision (Paul Bettany) are back in their own Marvel Studios series on Disney+. But the last time we saw them, things were pretty traumatic, and it appeared to be the end of Vision. Somehow, the synthetic superhero is back in WandaVision, and he’s trapped in some kind of warped sitcom, emulating classic television across different eras of entertainment. See what we’re talking about in the new WandaVision trailer that just debuted.

We’re not really sure why or how this scenario is unfolding, but it looks like one of the most trippy Marvel projects to date. Kathryn Hahn makes a brief appearance, and she acknowledges the fact that Vision is dead. So this is going to be some existential stuff. There’s also a fun shot of Paul Bettany dressed up in a cheap Halloween costume version of Vision from Marvel Comics, so we’ll get some more lighthearted stuff in this series too.

Reality will be bent, and WandaVision is slated to have some kind of major tie-in to the upcoming Doctor Strange in the Multiverse of Madness. So if you’re going to keep up with the Marvel Cinematic Universe, you’re gonna want to watch these shows on Disney+.

Marvel Studios’ “WandaVision” blends the style of classic sitcoms with the Marvel Cinematic Universe in which Wanda Maximoff (Elizabeth Olsen) and Vision (Paul Bettany)—two super-powered beings living their ideal suburban lives—begin to suspect that everything is not as it seems. The new series is directed by Matt Shakman; Jac Schaeffer is head writer. Debuts on Disney+ this year.

WandaVision is slated to arrive on Disney+ sometime this fall, but there’s no specific release date yet.