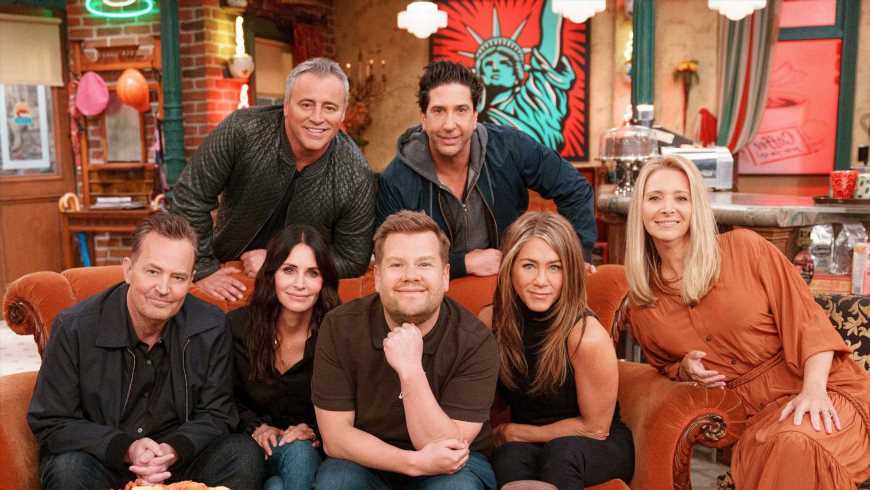 Following his participation in the long-awaited Friends reunion last month, James Corden has shared behind-the-scenes footage of the cast on the Warner Bros lot. In a clip on The Late Late Show, Corden joins the six actors on the set of Central Perk to discuss their experience getting back together.

In the 11-minute video, Corden drives Jennifer Aniston, Lisa Kudrow, Courteney Cox, Matt LeBlanc, Matthew Perry and David Schwimmer on a golf cart through the WBR studio lot. Onboard, the cast shares what it’s like being back and the group has an impromptu session of Corden’s “Carpool Karaoke” to the Friends theme song, “I’ll Be There For You.”

After Corden and the cast arrive at the soundstage, Corden gets to explore the old Friends sets. “This is so weird, I feel more nostalgic than if I was going back to an old apartment I ever lived in,” the host notes as he walks around Joey and Chandler’s living room. Later, he’s rejoined by the cast in Central Perk to discuss how it felt filming the reunion and being back in these iconic sets.

'The Morning Show' Season 2 Gets a New Teaser: Watch Now

“We spent a lot of time in these sets, had a lot of laughs, some of it made it on the camera,” LeBlanc notes. “But the funniest stuff, like that happened between us that never made it to TV, those are like the memories we keep talking about.”

Friends: The Reunion aired on HBO Max in May and featured the original cast, as well as special guests like David Beckham, Justin Bieber, BTS, Cindy Crawford, Cara Delevingne, Lady Gaga, Elliott Gould and Tom Selleck. The special, which was delayed due to the coronavirus pandemic, took the cast, the creators and a few special guests on a trip down memory lane. Corden conducted the interviews during the reunion.

During the special, Lady Gaga performed “Smelly Cat” with Kudrow while BTS members discussed how watching repeats of the sitcom helped them learn English. These appearances, along with that of Justin Bieber, were edited out of the special upon its airing in China.