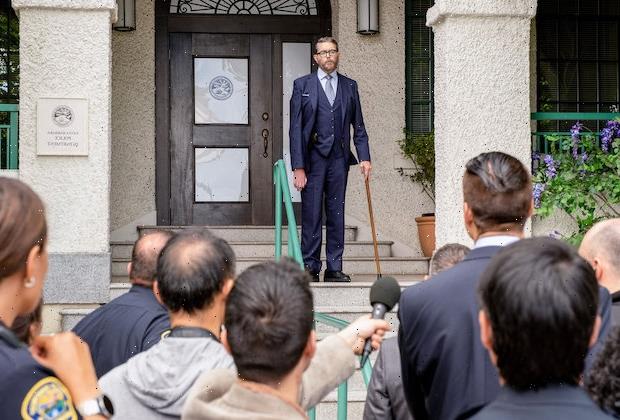 Chief of Police Carlton Lassiter is back and seemingly better than ever with his powers of perception, unless a hybrid Mexican food gets in his way.

Peacock has released the first four minutes of Psych 3: This Is Us (above), and it finds Lassiter (played by Timothy Omundson) wowing the crowd as he brilliantly explains why a perp who has brought in for arrest is in fact the wrong man.

Has rehab for his stroke in fact sharpened Lassiter’s crime solving skills? Press play above to see him show off his stuff, until a Cyrano situation goes very wrong.

In Psych 3: This Is Gus (premiering this Thursday, Nov. 18 on the Peacock streaming service), Shawn (played by James Roday Rodriguez, who co-wrote the movie with Psych creator Steve Franks) and “Groomzilla” Gus (Dulé Hill) — in preparation for a shotgun wedding before the birth of Baby Guster — go rogue in an attempt to track down expectant Selene’s (Jazmyn Simon) estranged husband. Meanwhile, Juliet (Maggie Lawson), Selene and Chief Vick (Kirsten Nelson) conduct a parallel investigation of their own, while Lassiter, as hinted in the sneak peek, is grappling with the future of his career.

As Omundson, whose real-life April 2017 stroke inspired Lassiter’s arc, told TVLine, “He’s at a point in his life, in his recovery, where he’s trying to figure out — much like for me, it’s an existential crisis — what he wants to be, what he can be, and what he’s going to be.”

Want scoop on Psych 3, or for any TV show? Email [email protected] and your question may be answered via Matt’s Inside Line.