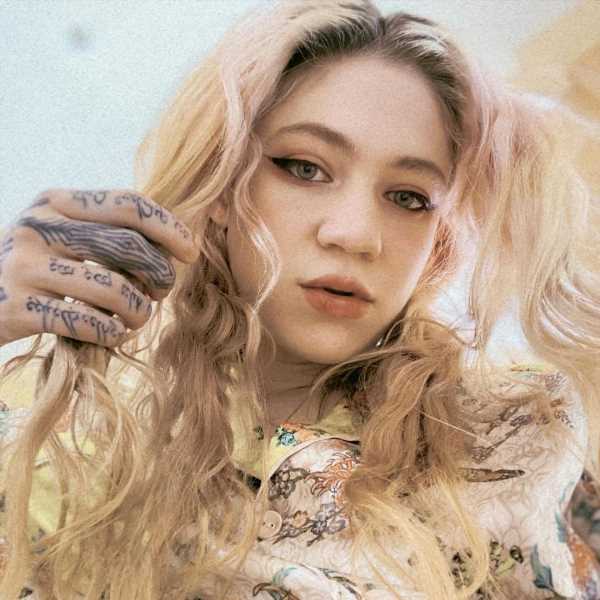 SINGER Grimes shocked fans when she revealed an enormous abstract back tattoo. 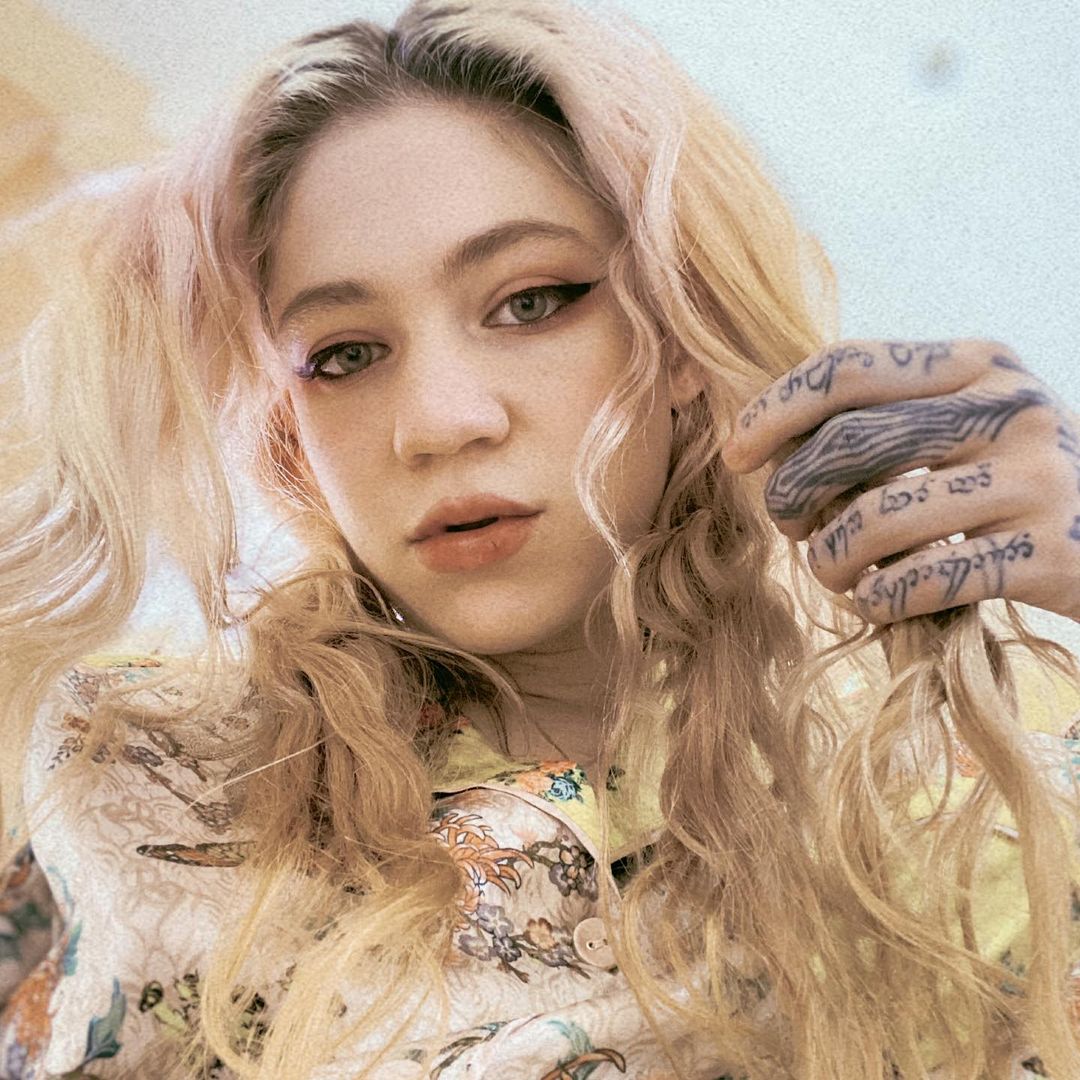 How many tattoos does Grimes have?

Grimes has had at least 18 tattoos, but pictures suggest she has plenty more, as the star has collected inking from friends and designers over the years.

In April 2021, the singer unveiled an enormous back tattoo which she described as "beautiful alien scars".

“Don’t have a good pic cuz it hurts too much and I need to sleep,” she wrote on Instagram.

“It’ll be red for a few weeks, but gna be beautiful alien scars. 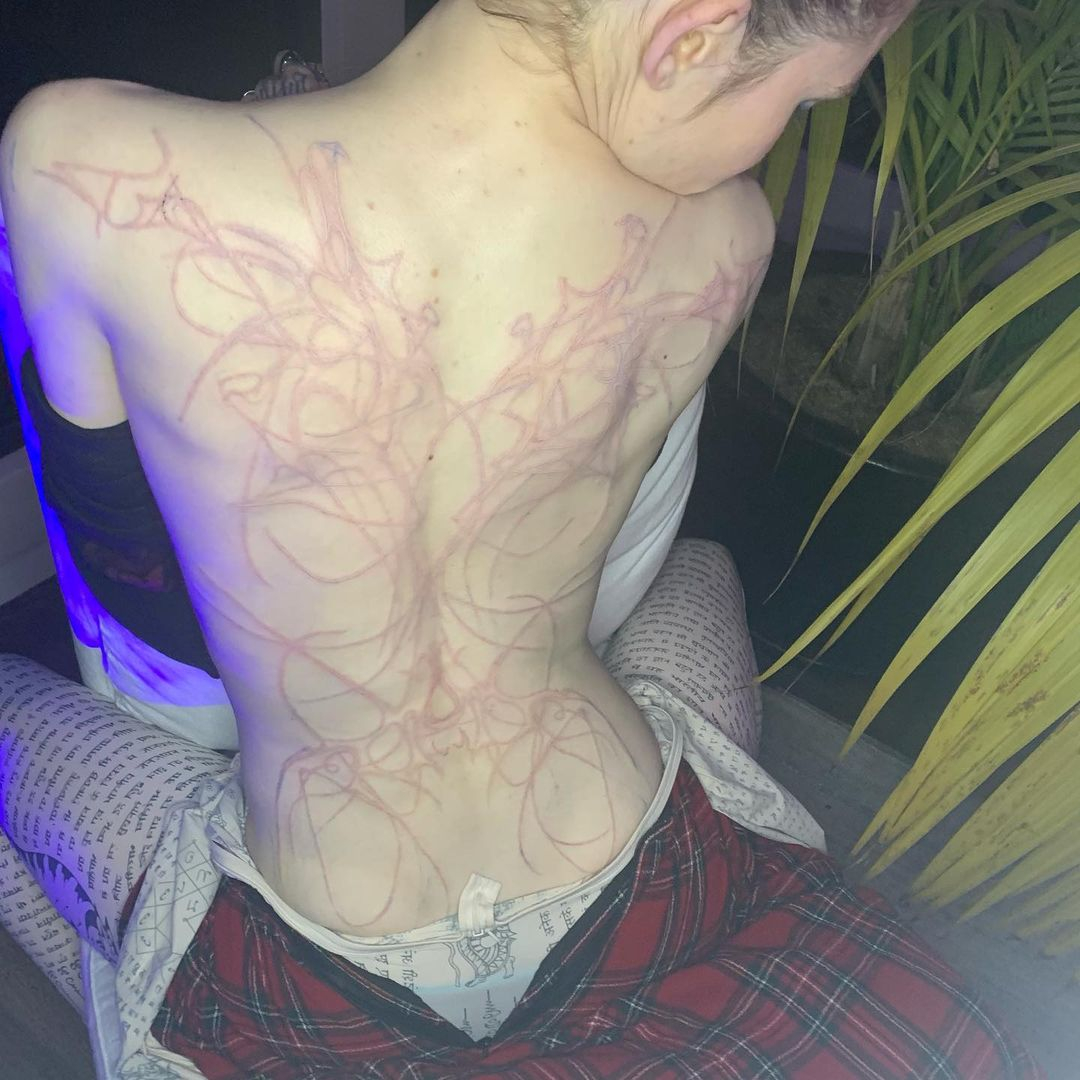 “Hope everyone’s having a good day.”

The tattoo was done by artist Tweakt and designed with “digital fashion artist” Nusi Quero.

Nusi Quero described the process of designing the tatt with Tweak T.

He wrote on Instagram: "Drew the base shapes on an iPad and then emailed me the image file. 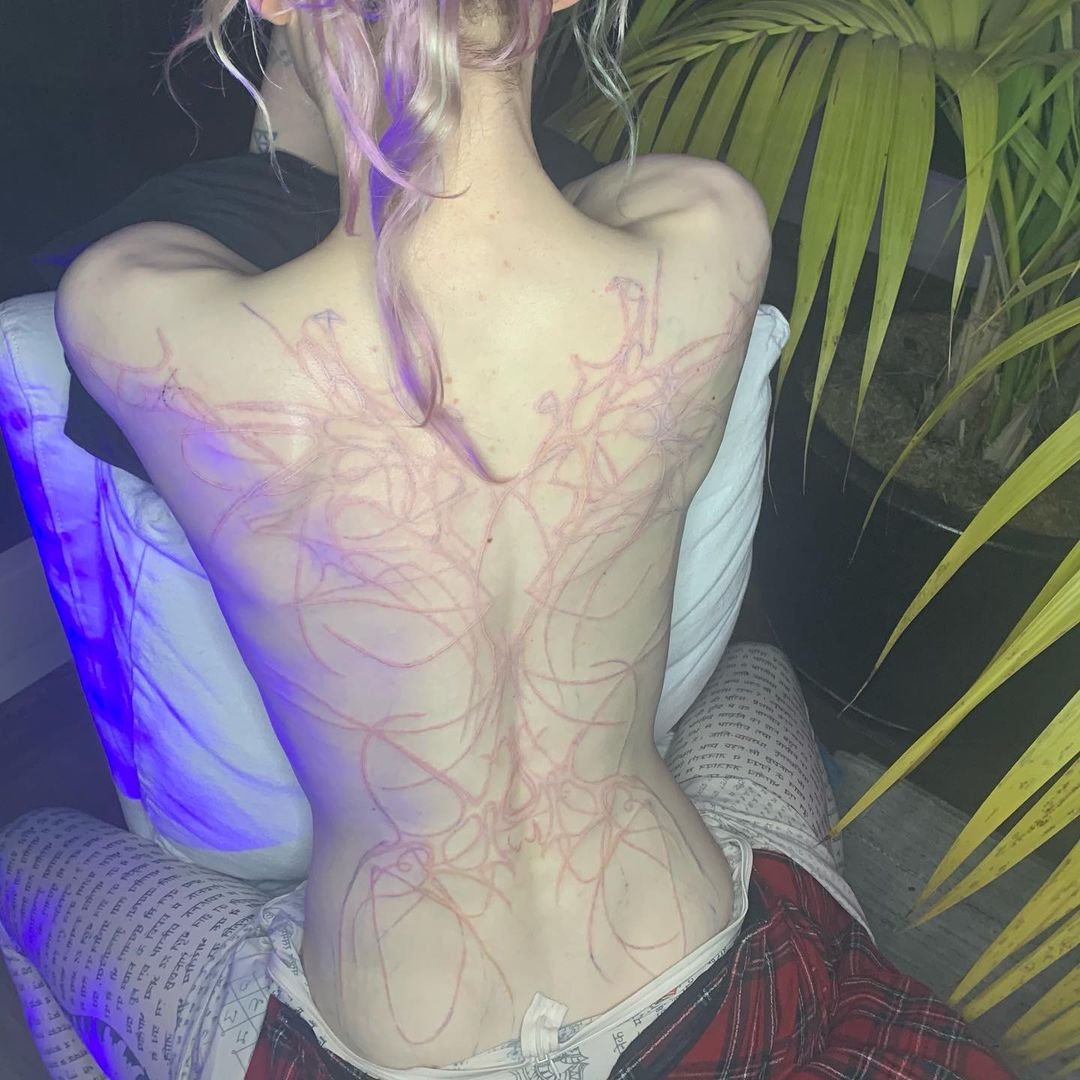 "I turned it into 3D geometry, selected vertices on the shape and guided and drew the embellishments along and around the shapes that he laid down first…

"[He did these] with a series of procedural operators (math rules) in a way that I felt spoke to his shapes and Grimes.

"I then sent it back to him as a png overlay and etc etc and they went in on it immediately full on 1 take 1 session. Ahh." (sic)

What do Grimes' tattoos mean?

In her April 2016 Teen Vogue cover story, Grimes said: "I never decide until 10 minutes before I'm getting a tattoo what it's going to be."

Grimes’ left hand are inked with Lord of the Rings tattoos , which she got in July 2018.

They match with her friend Hana Pestle aka HANA and feature handwritten words in the elvish language “Qenya”.

Her left hand also features a number of DIY tatts, including a number 8. 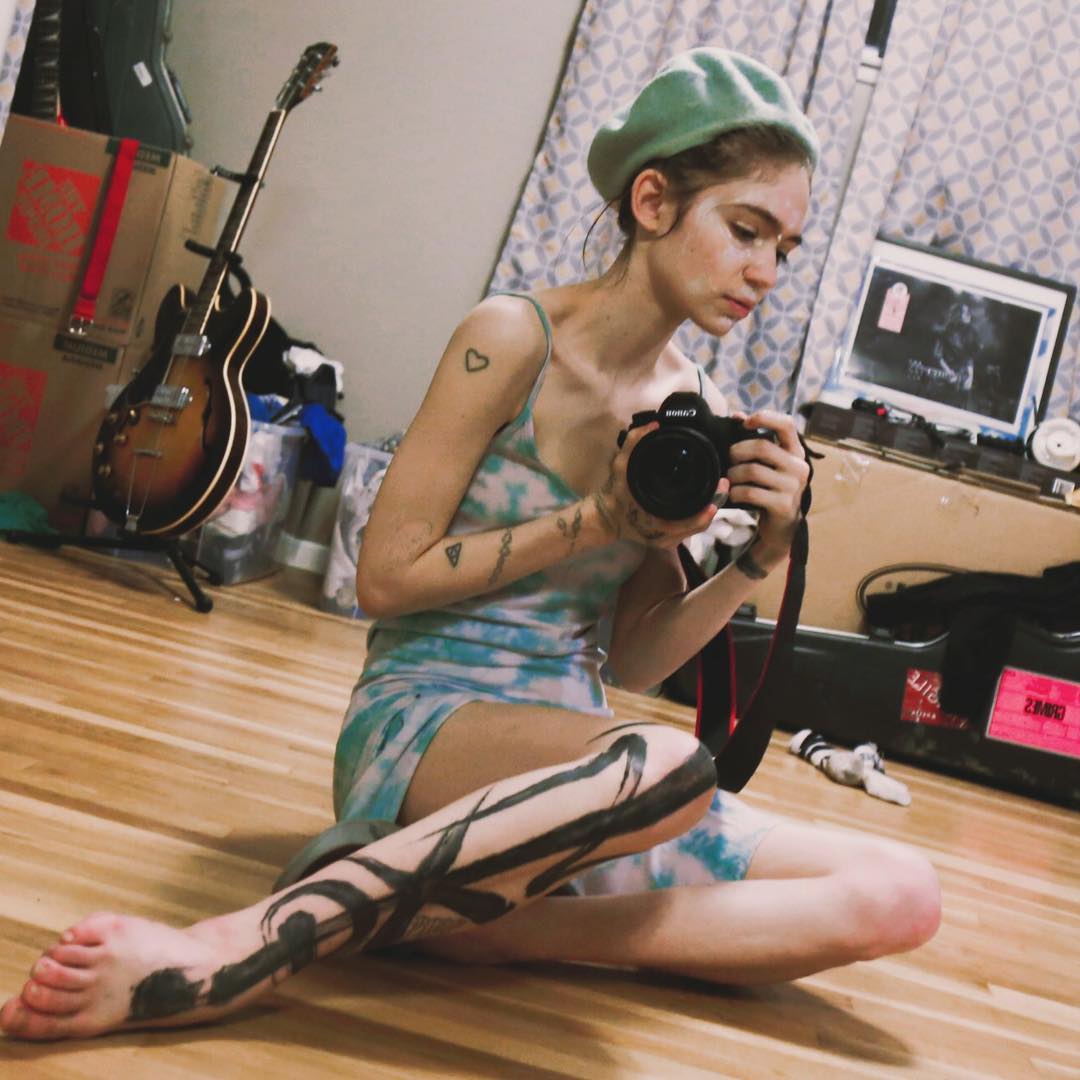 She explained their meanings to Prefix Mag: “I did them all myself, I have a Greek meander that is often mistaken for a square wave on my finger (very telling of the times), an alien head because I believe in aliens, an “8” because its my lucky number and a wrist band my friend designed for me that I did in the woods in Minnesota.”

Grimes also has the word “Beautiful” tattooed on the back of her left hand.

In an Instagram post, she said about the tattoo: “feeling beautiful despite many imperfections haha, terrible and wonderful memories etched into my skin. 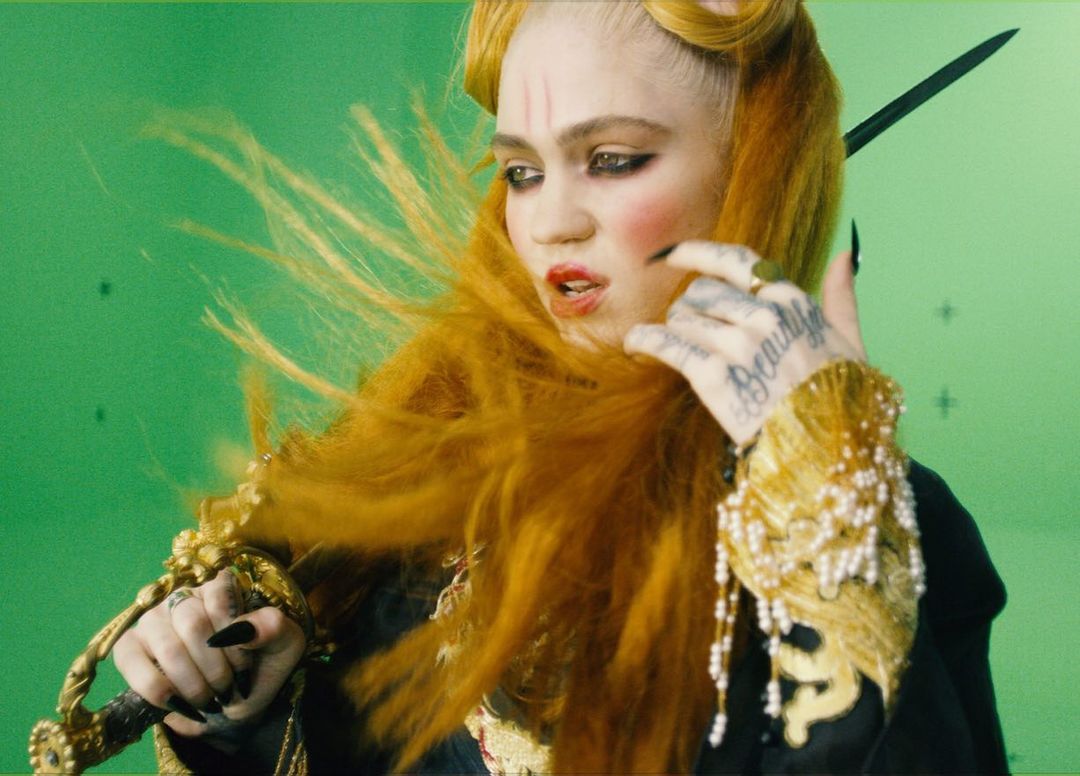 "Even the most screwed up ones were all done w or by my best friends and they all feel like home.”

The singer has a prominent brushstroke tattoo which starts at her thigh and goes down to her foot.

It incorporates the Russian word ‘тихо’ which can be translated to “quiet” in English.

The bold tattoo is the work of tattoo artist, Delphine Noiztoy at Love letters tattoo parlor in Los Angeles.

After she got the tatt in January 2017, Grimes said: "Can't beat a spontaneous, full-leg tat!"

Grimes also has a Triforce tattoo on her left forearm. She has said that this tattoo matches with her brothers, who have the same one.

She told Bullett Media in June 2012: "The Legend of Zelda was the first video game me and my brothers ever got, and so we all got matching Triforce tattoos." 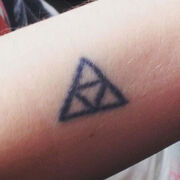