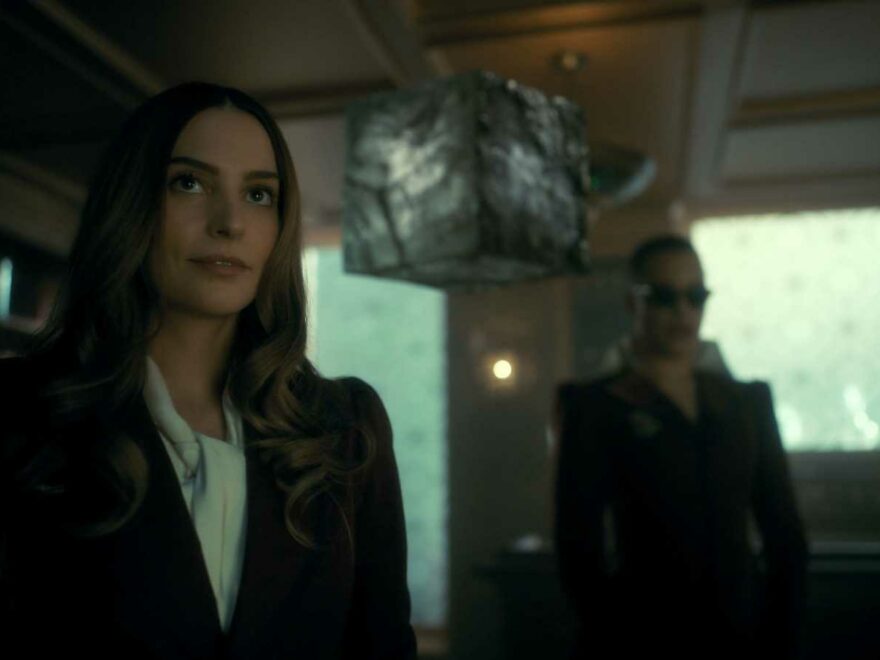 *MAJOR SPOILERS FOR SEASON 3 OF THE UMBRELLA ACADEMY BELOW!*

Season three of The Umbrella Academy is finally here and that means there is a slew of brand new characters to meet. And this time there’s nothing bigger than The Sparrow Academy, another group of powered humans who were adopted instead of the original ‘brellies we know and love. Although there were some major standouts and even a return of a beloved character from a different timeline, one new Sparrow not only become a fan favorite but also stole the hearts of Luther: Sloane. So what do you need to know about this brand new hero on the scene?

Here’s everything you need to know about Sloane from The Umbrella Academy.

What are Sloane’s powers?

Sloane is the number five of the Sparrow Academy, but don’t underestimate her. She is able to manipulate gravity, allowing her or others to float midair. Sloane is able to use it to her advantage by sending enemies or objects flying and throwing them off-guard when they’re in the middle of something.

What is Sloane’s story in season 3?

Sloane meets the members of The Umbrella Academy at her home along with the rest of the Sparrow Academy members. Immediately, she feels an attraction to Luther and they even help each other during the fight that happens between their two families.

Later on, Sloane admits to Luther that as much as she loves her family, she also wants to go travel the world and see other things. While Luther is kidnapped, Sloane spends time with him and tries to get to know him, but he questions her motives when he remembers that she is part of the Sparrows. Even then, they begin to start a sexual relationship with each other, while causes the Umbrella Academy, particularly Allison, to question what side Luther is on.

In an effort to try to be together, the two lovebirds try to bring their families together. However, things quickly turn sour when The Sparrows try to attack, and Harlan uses his powers to protect The Umbrella Academy, killing several of Sloane’s siblings. However, when they realize that the end of the world is coming and she really does love Luther, she works with her siblings and the Umbrella Academy to stop the kugelblitz.

Luther goes to her after the battle and comforts her. He also proposes to her with a ring featuring a moon rock from when he was up in space. She accepts and they later announce that they’re getting married despite their families hating each other and the world ending.

They have their big wedding the night before everyone votes to decide whether or not to go along with Hargreeves’ plan. Deciding to stay a united front, Sloane and Luther vote no. However, in an effort to give the group some motivation to go along with what he wants, Hargreeves kills Luther. Sloane discovers his body and vows to get revenge on whoever killed him, initially believing it to be a guardian from the Hotel Obsidian.

While searching around the hotel, she confronts one of the guardians with Five and Ben. After discovering that the monster has a weak spot in the back of his armor, the three work together and are able to successfully take him down. When they reunite with everyone back in the lobby, she learns from Klaus that Hargreeves was the one that killed Luther. Before she is able to go after him, another guardian appears.

She tries to fight against it along with the other members but is still weak from her previous injury. In a surprise to her and the rest of the group, Klaus is able to bring Luther back momentarily and he saves her from the guardian. The two are also able to say one final goodbye to each other before he goes back to the other side.

As the guardian comes revives back, Five notices the sigil markings on the floor and she is one of the members that stands on them. Allison later frees everyone from being a power source for the supercomputer, but she decides to push the button to reset the timeline.

While the Umbrella Academy, including Luther, and Ben step out of the elevator, Luther realizes that Sloane is missing and immediately goes out to find her.

Actress and model Genesis Rodriguez plays Sloane in the new season of The Umbrella Academy. Ironically, she previously played another character named Sloan in The Fugitive. She is also known for her voice acting roles as Honey Lemon in Big Hero 6 and Perfuma in She-Ra and the Princesses of Power.