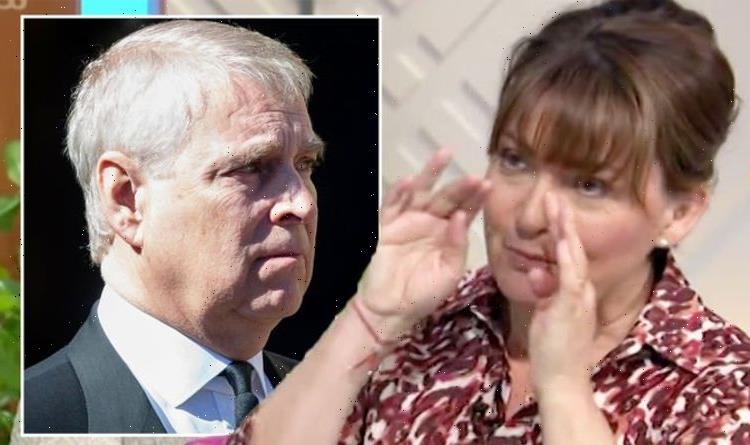 Prince Andrew and a number of other members of the Royal Family have joined forces to remember the Duke of Edinburgh as part of a one-off BBC special looking back at his life. Andrew is joined by the likes of Prince William, Prince Harry, Zara Tindall and a number of royals as they reminisce about the life of Prince Philip and his impact as the patriarch of the family. However, when Lorraine Kelly discussed the upcoming documentary on her ITV talk show with royal correspondent Russell Myers, the presenter admitted she found his inclusion “weird”.

Prince Andrew’s appearance in the BBC documentary comes days after the lawyer of Virginia Giuffre claimed legal papers regarding a sexual assault case involving his client were issued to the royal.

The High Court in London accepted last Wednesday a request by Giuffre’s lawyers to formally contact the Duke about the legal proceedings which were launched in the US.

Giuffre is suing Prince Andrew for allegedly sexually assaulting her when she was 17-years-old. Andrew has denied the allegations.

Discussing his upcoming appearance on the BBC amid the allegations, Lorraine said: “Now, it was strange because all of his [Prince Philip’s] children spoke, including Prince Andrew.

“And when he popped up, it’s just weird,” Lorraine added. “You feel like sort of boo-hiss, don’t you?

“He’s like a pantomime villain,” the ITV host continued as Russell chuckled.

Lorraine added: “It is bizarre, it really is bizarre and we’re told, you were talking about this earlier, about iris talks now?”

“Big time,” Russell claimed before Lorraine weighed back in: “Maybe it’s dawned on him now that this is blinkin’ serious and he can’t hide from it anymore.”

Russell replied: “You couldn’t not have him involved because the rest of the children and some of the older grandchildren were involved.

“But, again, it’s bizarre because of everything that is going on in his life at the moment.

“Just overnight we’ve heard that he has actually been served with these civil case papers now.

“Virginia Giuffre has accused him of all manner of sexual assault, obviously he vehemently denies these allegations, but his lawyers have been playing this sort of cat and mouse game with the authorities in the US.”

Ahead of the documentary airing on BBC on Wednesday evening, Prince Andrew is reportedly residing in Balmoral.

According to a Daily Mail source, the royal “has, in effect, been in lockdown ever since the Newsnight interview, so far longer than anyone else in the country, but he is coping.”

A second source also told the publication: “I have to say that he has always been utterly consistent with me.

“He has no recollection of meeting Roberts let alone any of things she alleges they did.”

Mr Boles, the legal representative for Giuffre, also added to The Sun while referring to the timing of the papers coinciding with the birth of Princess Beatrice’s daughter: “We would not try to serve him when he’s visiting his granddaughter.

“I don’t mean to be mean, but I’ve not understood exactly what his strategy is.

“If he’s continuing to hide now, I’m even more uncertain what his strategy is. The service is now over.”

Lorraine airs weekdays at 6am on ITV.