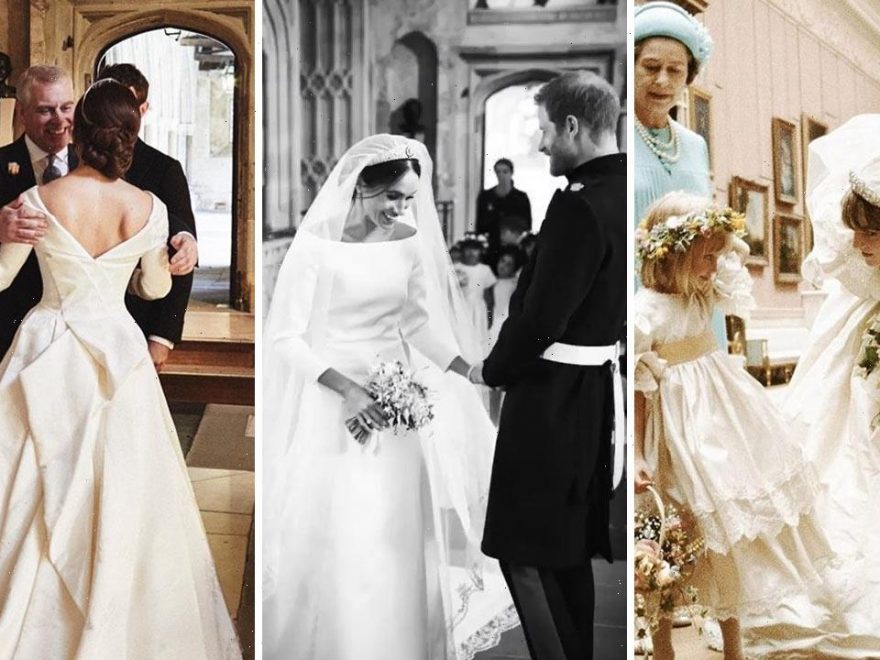 But there are also a few behind-the-scenes pictures that capture their private moments, including their wedding rehearsals, pre-ceremony nerves and the big wedding dress reveal. Take a look back at the stunning photos…

When Prince Harry and Meghan Markle celebrated their first wedding anniversary on 19 May 2019, Sussex Royal shared a compilation of photos in a video. The couple are seen signing their marriage license, Harry heads down the stairs once he is ready to head off to the venue, and Meghan shares an intimate moment with her mother Doria Ragland.

Princess Diana married Prince Charles at St Paul’s Cathedral in 1981, before heading to Buckingham Palace for the wedding reception. Diana was photographed behind-the-scenes as she reassured her five-year-old bridesmaid Clementine Hambro not to be nervous, with the Queen standing close by.

SEE: 3 videos from Princess Diana and Prince Charles’ wedding that never saw the light of day

Princess Diana and Prince Charles after their wedding rehearsal

Kate Middleton and Prince William tied the knot at Westminster Abbey on 29 April 2011, and the couple attended a private rehearsal a day ahead of the ceremony. Naturally, Kate looked radiant as ever as she was photographed outside with Prince Harry.

The Swedish royal family recently released a series of wedding photos from Crown Princess Victoria and Prince Daniel‘s nuptials on their tenth anniversary. The collection included one behind-the-scenes shot of the couple embracing behind the doors to their reception, before entering and joining guests.

MORE: All the official photographs from Prince Harry and Meghan Markle’s wedding day

Prince Carl Philip and Princess Sofia of Sweden released ten behind-the-scenes images of their wedding day at Stockholm’s Royal Chapel to mark their fifth anniversary on 13 June 2020. The beautiful series included Carl Philip getting ready and Sofia taking a selfie with her father.

When Lady Gabriella Windsor married Thomas Kingston at St George’s Chapel on 18 May 2019, Gabriella’s cousin shared a collection of inside photos from the day on social media. This included a snap of Gabriella cutting the cake.

Make sure you never miss a ROYAL story! Sign up to our newsletter to get all of our celebrity, royal and lifestyle news delivered directly to your inbox.