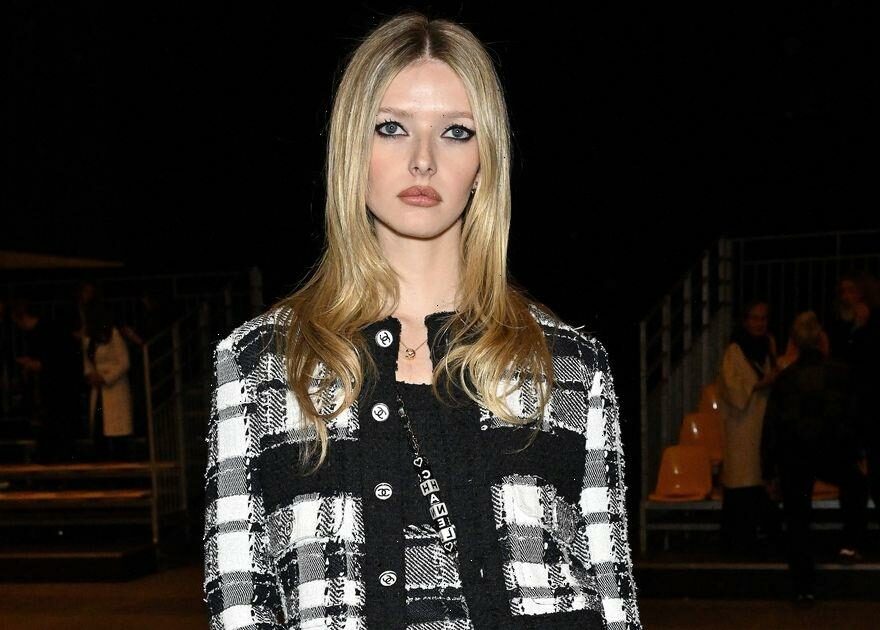 Gwyneth Paltrow and Chris Martin's 18 year old daughter Apple Martin was the splitting image of her mum as she attended a fashion show during Paris Fashion week.

She looked right at home at her first fashion show as she arrived wearing a chic black and white dress and a matching jacket by the French fashion house.

She added chunky black loafers to the ensemble and wore her blonde hair in a long, loose waves. For her make up, she opted for dramatic black eyeliner and a peachy lip.

She finished off the look with one of Gucci's iconic handbags, with beads on the chain that spelled out 'Chanel' as well as wearing a pair of heart-shaped Chanel drop earrings, several bracelets and a gold pendant necklace.

Apple is said to be very close to her mum and the mother daughter duo have been spending tons of quality time with each other after Apple moved away to New York to start university last year.

In an interview with CBS Sunday Morning, Gwyneth was asked how she felt about her 18-year-old's departure.

She replied: "Oh wow, that is… I know it sounds nuts, but it feels almost as profound as giving birth."

The actress also shared her thoughts on her amicable relationship with the father of her two children, Chris.

"We really did commit to wanting our children to be as unscathed by the divorce as possible."

At the end of 2022, Gwyneth shared photos of her family holiday to "wrap up" the year.

In the photos, she is seen posing with her two children Apple and Moses, who she shares with Chris Martin, as well as Gwyneth's mum, actress Blythe Danner.

Gwyneth and Chris got married in 2003 and soon had their two children.

The popular Coldplay song Fix You was reportedly written by Chris to Gwyneth after her father passed away in 2002.

The same year she separated from Chris, the actress started dating producer Brad Falchuk, whom she met on the set of Glee in 2010.

The couple went public with their relationship in April 2015 and later announced their engagement on January 8, 2018. They got married on September 29, 2018 in the Hamptons on Long Island, New York.