In it for the long run: Sharna Burgess shared a sweet new snapshot of her kissing her ‘end game’ boyfriend Brian Austin Green.

Sharna Burgess and Brian Austin Green are in it for the long haul. The professional dancer, 36, shared a sweet new photo with her actor boyfriend, 48, on Instagram on Wednesday, Sept. 1. The couple share a kiss in the black-and-white snapshot and Sharna called her partner her “end game” in the caption.

The couple went Instagram official in January after they were spotted in Hawaii together the month before. A source previously told HollywoodLife that the two are “getting serious” in their relationship. The dancer has even met the actor’s children. (He shares Bodhi, 7, Noah, 8, and Journey, 5, with ex-wife Megan Fox and Kassius, 19, with former partner Vanessa Marcil.)

“They are cutely obsessed with each other,” the source told HL. “Sharna has also met Brian’s kids. They’re official and she’s spending a lot of time at his place in Malibu.” Adding that this is the “happiest” Sharna has been “in a long time” with a partner, the source continued, “They’ve been dating [for] a few months and things are definitely getting serious between them.”

The Dancing With the Stars pro, for her part, has gushed about her partner’s parenting. “He’s a great dad,” she told Australia’s The Morning Show in February, adding that he and Megan have “raised three beautiful children.” She said of the kids, “They are so wonderful and sweet and kind and considerate. They’ve done such an amazing job.” Sharna added, “I’m grateful that I’ve been able to fit into it, into their world.” 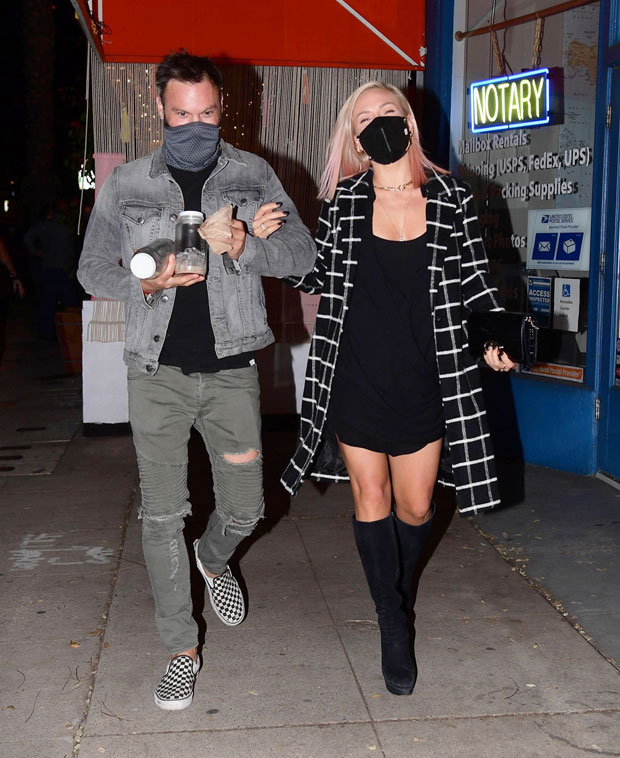 Brian and Megan split early last year after nearly ten years of marriage. Brian confirmed the news on his podcast in May 2020, explaining that the two remain on good terms. “I will always love her and I know she will always love me,” he said. “And I know as far as a family, what we have built is really cool and really special.” Later, he added, “It sucks when life changes and something that you’re used to, that you’ve been doing for 15 years, you try and not get rid of but you change.”

While speaking to Entertainment Tonight in June, Brian opened up about finding love with Sharna again. “I’m excited that she’s in my life,” Brian said. “My kids love her. It’s a win-win right now. I totally love her.”