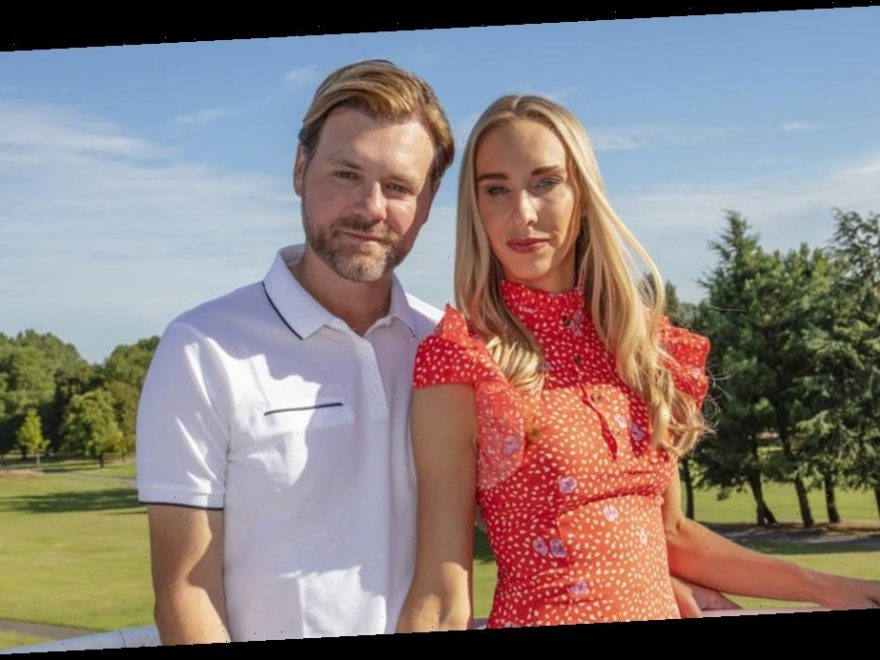 Brian McFadden and his fiancée Danielle Parkinson look the picture of health and happiness when OK! joins them for a socially distanced spa day at The Belfry Hotel & Resort near their home in Rochdale.

Seeing the besotted pair, you’d never guess that behind the scenes they’ve been experiencing an emotional journey in their quest to start a family together.

The couple, who met four years ago and got engaged just before Christmas, had already told OK! about their plans to have a baby. But it’s only now that they feel ready to share the heartache they’ve experienced along the way.

Having begun their first cycle of IVF over 12 months ago, they were devastated when Danielle had a miscarriage late last year while Brian was out of the country. A subsequent attempt also failed. Despite this, they’re still full of hope and positivity as they prepare to try again using one of the two eggs that currently remain on ice.

“We’ve got so much love, we want to share that love with someone else,” Brian tells OK!, adding pragmatically, “But it’s not the end of the world if we don’t get pregnant. We always said we’d try every option.”

For Danielle, who’s 39 next month, the IVF process has been “invasive”, but she explains in her upbeat manner, “I’m a get on with it kind of person.”

Brian, 40 – who’s celebrating the success of his Strings Attached album with Boyzlife collaborator Keith Duffy – is already a father to daughters Molly, 18, and Lilly, 17, with first wife Kerry Katona. He was also married to Vogue Williams, who’s just had her second child with husband Spencer Matthews.

Through his passion for golfing, a hobby Danielle has now taken up, Brian’s become good friends with Mike Tindall, the husband of Her Majesty the Queen’s granddaughter Zara. The royal pair have spoken candidly about Zara’s miscarriages, with Mike being praised for raising awareness about the affects on fathers-to-be.

“There’s so many people having medical interventions to try and get pregnant,” says Danielle. “Brian and I want to share our experience to help others feel less alone.”

Here, the couple recall the highs and lows of their IVF journey so far and how the past 12 months have brought them closer than ever…

Tell us about how your IVF journey began?

Danielle: We started trying for a baby after a year together. We love each other to bits so we thought, “Let’s go for it!” Two years later nothing had happened so my GP referred us both for tests. We’re over a year into the IVF process now.

Brian: We’ve always known we want a baby together, so it was a case of whatever it takes. We’d tried using ovulation tests and having a schedule, but that didn’t work.

Did the hospital discover what the issue is?

Danielle: My levels of AMH [anti-müllerian hormone] were quite low. Even though I was producing eggs, there were
very few of them.

You’re due to have your third egg transfer. What happened the first two times?

Brian: Dani got pregnant on our first try but we lost the baby. We were devastated.

Danielle: I was about five weeks in. I felt pregnant. I had a backache and some tiredness. Then I started bleeding and the symptoms disappeared. I took a pregnancy test and it was negative. A blood test in hospital confirmed I’d lost the baby.

Was Brian with you, Danielle?

No, Brian was in Dubai so I had to tell him over the phone. It was horrible being apart when we found out. I flew straight to Dubai and we both cried when we saw each other.

Brian: Dani hadn’t had a scan at that point and in my head I didn’t believe the baby was gone. The previous evening,
I met a top gynaecologist at a charity dinner and she told me to bring Dani straight to her when she arrived in Dubai. She did a proper scan and she said, “There’s no baby in there.” That’s when it hit me. It was the worst sinking feeling ever.

Danielle: It was awful. She showed us that my womb was empty. I was in tears – I felt numb. Brian was upset too, but he was really strong for me.

Kerry Katona's children: Everything you need to know about the star's five kids and family life

Brian, did you hold in your emotions to support Danielle?

Yes. You have to do that. We never let each other see weakness. Even if we have a little cry on our own, together we try to be strong.

Had you started to imagine how your life might have changed?

Brian: We were making plans and picking baby names. I even avoided taking gigs abroad around the due date. As far as we were concerned, we were out of danger.

Danielle: We were over the moon, discussing whether it might be a boy or a girl. Both of our mums had cried when we told them I was pregnant so it was even worse telling them we’d lost the baby. Having to tell Molly and Lilly was so hard, too.

Brian: That broke us a bit.

Danielle: We wanted to shut ourselves away. Even now, anything can trigger you going back to that moment and then you’re crying again. Our emotions have been all over the place. Leading up to this interview I was crying for no reason, just thinking about the process.

Is that why you didn’t mention it the last time we spoke to you in December about starting a family?

Danielle: Yes, we said that we were trying for a child and that we’d go down the IVF route if need be, but in fact we’d already started the process. We just weren’t ready to tell everyone. I know that the miscarriage wasn’t my fault. It just wasn’t meant to be. Now we’re ready to share our experience and let people know that fertility issues are very common.

Brian: The more you talk about it, the easier it is to talk about subsequent tries.

Mike Tindall spoke about his and Zara’s experience of miscarriage, too…

Brian: It was Mike Tindall who called me after Dani’s miscarriage and gave me the name of a nutritionist in Dubai. She put us on a special diet. Mike’s been very supportive from the very
first time we talked to him about our fertility struggles.

Danielle: It’s really lovely that Mike and Zara are so open about what happened to them. It’s people like them who’ve helped us feel able to talk about our situation.

What happened when you had the second egg implanted?

Brian: It didn’t take. We were at home together when Dani found out. It wasn’t as bad as the first time because we knew in our hearts Dani wasn’t pregnant.

Danielle: I didn’t have those pregnancy signs. I had to phone the hospital to tell them, which was quite upsetting. But the remaining two eggs are really strong which has given us more hope.

How many eggs will you have transferred this month?

Danielle: Just the one. If we’re not successful, at some point in the future we might have two eggs put back in.

Brian: I’d love to have twins but there’s a higher risk of problems for the mum and babies.

Have you talked about how long you’ll keep trying for?

Danielle: No, but I think we’ll get to a stage where we’ll feel we’ve tried for long enough. As much as we want kids, it’s not the be all and end all. We still have Molly and Lilly in our lives. But we also still have the opportunity for two more cycles of IVF. That means two more egg collections under general anaesthetic. They collected 15 eggs for the first cycle and four developed, so a lot of them fizzled out.

Was it hard giving yourself the injections ahead of the first egg collection?

Danielle: I had to psych myself up but it became easier – grab your belly fat, jab the needle in. I had to do that for about a week. The team at Saint Mary’s Hospital in Manchester have been wonderful, supporting us all the way.

Brian: The fear and the horrifying look of the needle goes out of the window when you realise this could possibly help us have a little baby.

Will you consider other options if IVF isn’t successful?

Danielle: We’d consider using a surrogate. I wouldn’t feel any less of a woman if someone else could help the baby grow. It would still be our baby.

Brian: Adoption is an option too, but right now I have a feeling the IVF will work for us. We were so close that first time. If we want to get pregnant we have to be positive, I really believe that. When you have a positive mental attitude it affects your body.

Danielle: It’s all or nothing now. We’re going to try everything. A friend even gave me a crystal and an affirmation mantra to repeat. If it gets me in a good mental state to get pregnant, why not?

Brian, will you be there when Danielle has the next egg transferred?

No. I can’t go in to the hospital with her this time because of coronavirus. I’ll have to wait in the car, which is weird. I was there the first time it was done, but away on tour with Boyzlife the second time.

What advice did Mike Tindall’s nutritionist contact give you?

Danielle: It’s important to get the right alkaline balance in your body. If it’s too acidic, that’s not good for carrying a baby. She told us to cut out all red meat and dairy to start with. We have freshly farmed fish and organic turkey and chicken. We can have the occasional steak.

Brian: I’ve cut down my alcohol intake to two glasses of red wine a week. I’m the lightest, skinniest, healthiest and soberest I’ve ever been.

Are you both still hopeful you might get pregnant naturally?

Brian: If we do have a baby through this, when it turns 21 we’ll be saying, “You’re technically 22. You were in a freezer for a year!”

Brian, what will you do differently as a father this time?

I was way too young when Molly and Lilly were born – a child myself really. I had no wisdom to pass on to them. I want to enjoy being involved in my child’s life from the start, taking them to school each day.

You haven’t set a date for the wedding yet. Are you tempted to have a quick ceremony, just the two of you?

Brian: No, the wedding can wait. The most important thing right now is trying to have a baby. As far as we’re concerned, we’re already married.

Has this experience affected your relationship?

Brian: It’s made us stronger and brought us closer together. I love everything about Dani. She’s easy to fall in love with. She’s a sweetheart. I tell you, that child is going to be spoilt rotten when it’s born.

Danielle: We’ve had our tough times, but I’m very lucky. Brian is the first person to love me for me.