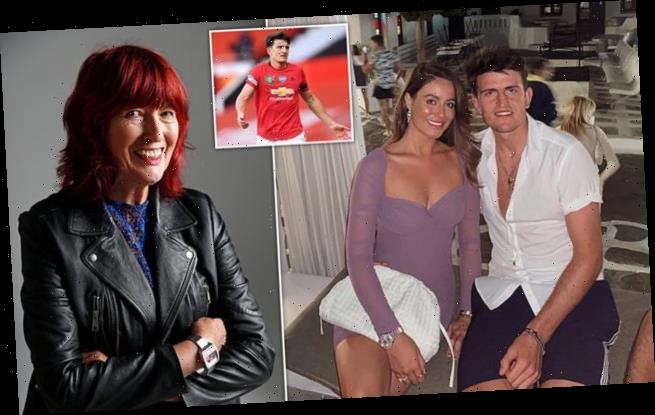 JANET STREET-PORTER: Harry Maguire’s night of shame reveals the British addiction that will kill more of us than Covid-19 ever will – booze (especially after our drink-sodden lockdown)

Harry Maguire is the most expensive defender in the world, a gifted 27-year-old chosen to play for his country, given the honour of captaining Manchester United who paid £85million to secure him.

Unlike most 27-year-olds who are still living with mum and dad, unable to afford a home of their own, Harry’s talent has brought him copious rewards and an income of around £190,000 every week.

This week, football’s poster boy, his brother and a friend spent two nights in police custody in Greece after being involved in a brawl which ended with Maguire being handcuffed and charged with assault and attempted bribery – allegedly offering to buy his way out of trouble by promising wads of cash to the cops.

In his absence, a court found the three men guilty and sentenced them to imprisonment for 21 months. 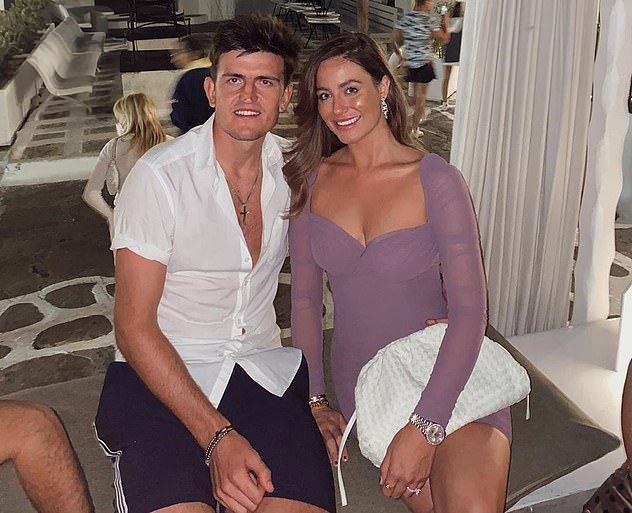 Harry Maguire’s with his girlfriend Fern Hawkins. He could have protected Fern and his sister Daisy a bit better from unwelcome attention as they toured bars in search of more booze

Maguire is planning to appeal, and posted ‘the truth can’t be hidden’ – a quote from Buddha, no doubt plucked from a self-help manual – on his Instagram account this morning.

Harry’s version of events is rather different to the police version. He claims he reacted angrily when two mysterious Albanian men – who have yet to materialise – attempted to inject his sister Daisy with a drug, and his group reacted to protect her by trying to catch the offenders.

The police disagree and say Maguire and his pals were fighting – aggressive and volatile and a plain clothes officer required first aid after Maguire lashed out and tried to break free. Apparently, one of the group shouted ‘f*** the police’.

The prosecution also claim Maguire tried to pay the cops off, and predictably boasted ‘don’t you know who I am?’

The defendants say they are ‘victims’ and have instructed a high-profile human rights lawyer to appeal, who says the lads are not capable of such ugly behaviour as ‘they love the country and are keen on ancient Greek culture’. 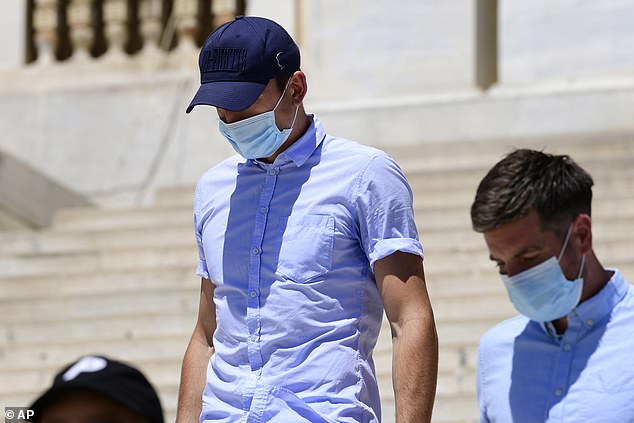 Maguire leaves a court building on the island of Syros on Saturday before returning to Britain. The footballer’s version of events is rather different to the police version

The prosecuting lawyer calls this as a ‘shameful attempt to cover up disgusting behaviour’ and wants them to return to Greece and apologise.

Whatever the truth about the brawl that occurred that drunken night, there’s no disputing the huge amount of alcohol Harry and his pals had consumed over a five-hour drinking session.

Following the conviction, Maguire has been dropped from the England squad due to play Iceland and Denmark, and his career hangs in the balance – all as a result of several days’ intensive partying on the celebrity destination of Mykonos, where the footballers’ ‘love of Greek culture’ seemed to consist of lying on £2,000-worth of sunbeds in an exclusive beach club and quaffing every make of vintage champagne the bar could lay their hands on.

On the day in question, the three defendants – Harry, his brother Joe and friend Chris Sharman – had been drinking for over five hours. 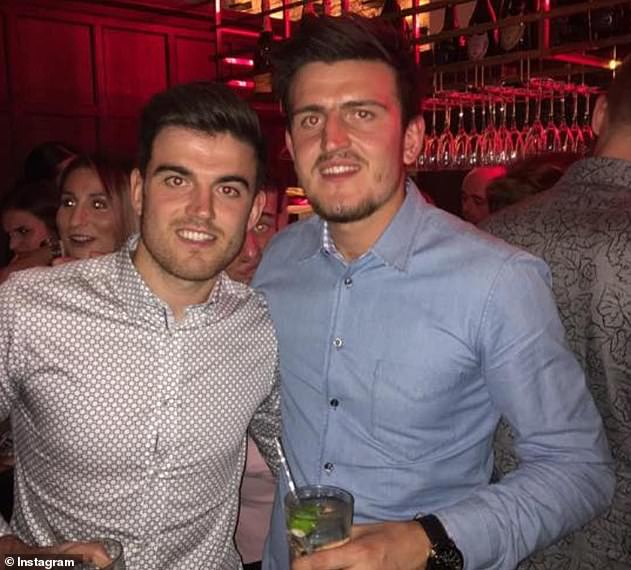 Why is this such a familiar story? Apparently, an onlooker said Harry looked ‘unhappy’ and had been taunted by jeering fans in some of the places he visited. Tough!

Why did he not take the precaution of having a personal bodyguard? If you earn nearly £200,000 a week and fly around in private jets, surely that makes sense.

Pictures of his girlfriend Fern Hawkins taken earlier in the evening on the day of the ‘brawl’ show her wearing thousands of pounds of worth expensive jewellery and a gold watch.

At the least, he could have protected Fern and his sister Daisy a bit better from unwelcome attention as they toured bars in search of more booze.

Why do people think that drinking marathons lead to a good time? After you’ve drunk two or three bottles of vintage champagne, you might as well switch to £7 Prosecco from Tesco, because you are in no fit state to detect quality over quantity.

The trouble is, Harry’s choice of leisure activity (drinking) has become part of our British way of life.

Lockdown has heightened the stranglehold that booze has on the Brits.

In spite of surveys paid for the drinks industry claiming that we are drinking ‘no more than usual, perhaps even less’- the opposite is true.

Back in April, research by the Global Drug Survey found that 50 per cent of Brits said they were drinking on more days of the week than before the virus. 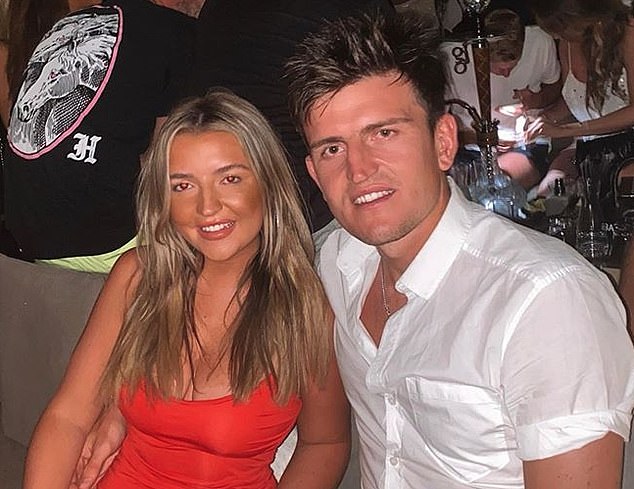 This survey estimated there was a 33 per cent increase in binge drinking – the kind Maguire and co seem to enjoy, where you just keep drinking for hours and hours.

Earlier this month, the charity Alcohol Drinkaware found that 22 per cent of the population aged over 18 – 11.7 million – said they were drinking more than before lockdown.

Over a third of those trapped at home on furlough – not knowing whether their jobs would exist in the future -said they were drinking more and so did a third of adults with a child under 18.

Further research (published in the Lancet) agreed that over a third of adults were drinking on more days of the week and one in five start earlier, before midday.

Professor Sir Ian Gilmore, who chairs Alcohol Health Alliance UK, called on the Government to address the long term health implications – and so far there has been no response. 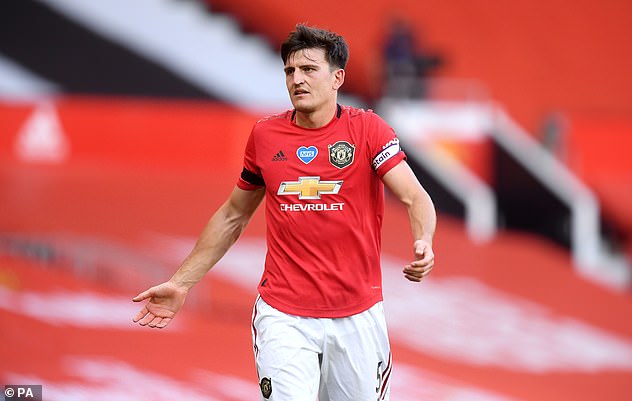 Maguire playing for Manchester United on June 24. Following the conviction, the footballer has been dropped from the England squad due to play Iceland and Denmark

Harry Maguire and his mates are typical in that we believe drinking is our ‘reward’ for getting through a day in lockdown, for managing to get on a plane and go on holiday.

We normalise excessive drinking by telling ourselves we ‘deserve’ it.

Lockdown has meant that most of our drinking takes place behind closed doors, in the privacy of our own homes, where no one can see or monitor our behaviour the way they can in a pub or wine bar.

The effect of lockdown on pubs has been catastrophic. Even Wetherspoons (who specialise in cheap beer) are expecting to post a loss this year, as punters have not flocked back in the expected numbers, preferring to get plastered lying bloated on their own sofas.

The Brits have a disgusting reputation as the nastiest boozers in holiday resorts. 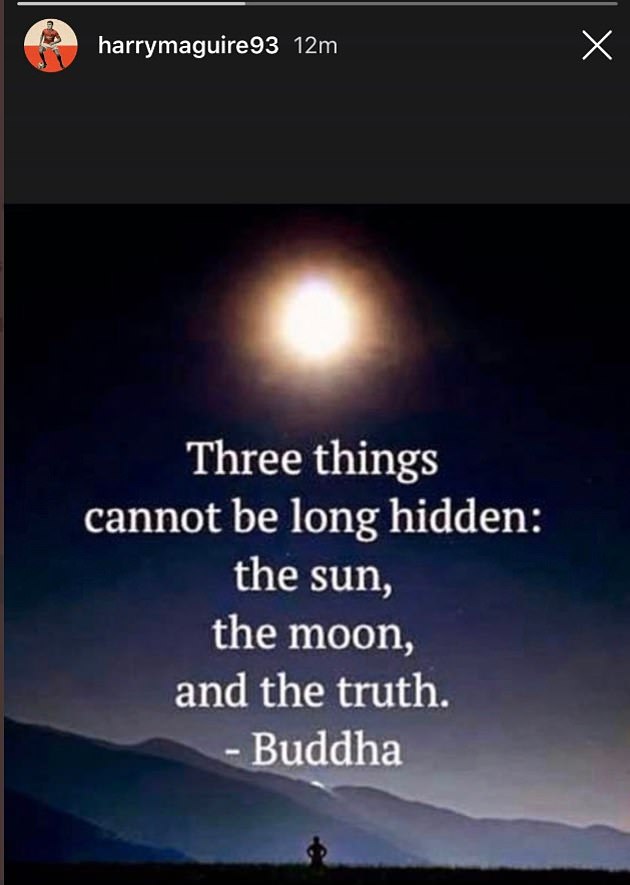 Maguire is planning to appeal, and posted ‘the truth can’t be hidden’ – a quote from Buddha, no doubt plucked from a self-help manual – on his Instagram account this morning

We equate sun and fun with buckets of Sangria and vomiting in alleyways – but this reputation could mean that (post pandemic) some resorts who are looking to compensate for fewer visitors by going upmarket will no longer be willing to welcome us.

One hotelier in Benidorm says the town has moved on, saying: ‘In the 80’s and 90’s people put up with the drunkenness because they needed to. We can’t cater for a low level clientele to get drunk for three days. This doesn’t happen in a modern country’.

I’ve lived with an alcoholic, and know from experience they will use every excuse in the book to justify their behaviour.

And it’s so easy to slide from heavy drinking into addiction. An addiction which can mask low self-esteem and insecurity, something afflicting even the most famous and successful.

Much has been written about the impact Covid-19 will have on the prospects for cancer sufferers who have been denied diagnosis and whose treatment has been curtailed, but the real killer over the next decade will be the deadliest drug that’s still legal, cheap and readily available to all – alcohol.