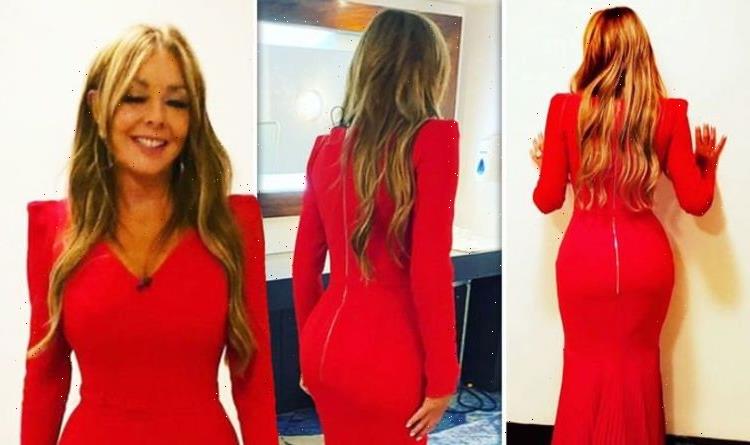 Carol Vorderman returned to hosting duties at the Daily Mirror Pride of Britain Awards 2021 in London last night and her outfits didn’t disappoint. At first, the 60-year-old was seen sporting a navy corset-style gown which clung onto her incredible physique.

Adding to her glamorous display, she styled her hair in loose curls and wore carefully contoured make-up.

The presenter posed for snaps on the red carpet with her new co-host Ashley Banjo.

Later on in the evening, the mother-of-two changed into a tight-fitted gown once designed for Holly Willoughby.

Carol teased fans with a rear view of her striking red ensemble earlier this week as she stood with her back to the camera.

Today, the ex Countdown host went on to share further snaps of herself in the Haute couture number.

In one picture, she was seen beaming for the camera while standing on the stage at the event.

Backstage, she went on to give fans a view of her physique from different angles.

In another snap, she closed her eyes and smiled as she posed confidently in the dress.

Carol also placed her hands on a wall as she stood with her back to the camera showcasing her derierre.

In a final picture, she posed with her hands to her side as her rear took centre-stage.

The presenter’s long-sleeved dress featured pleated detailing at the bottom and a thin waist belt.

Earlier this week, she told fans the gown was originally designed for This Morning host Holly.

She penned: “That one fitted like a glove… I was well chuffed I could fit into it!!!”

Pipsays commented: “That dress is AMAZING!”

Carol is no stranger to showcasing her sensational figure on her Instagram page, much to the delight of her fans.

Her notable posterior has previously won the Rear of the Year award on two occasions.