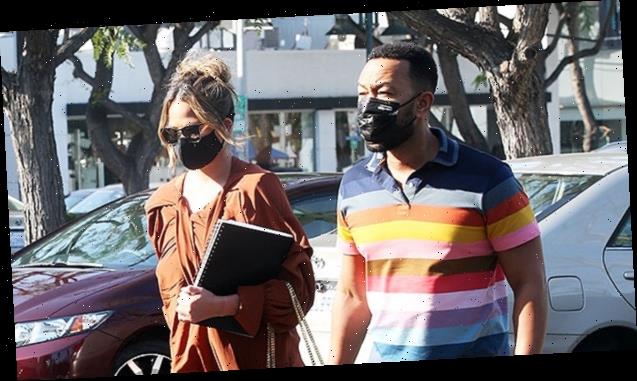 Chrissy Teigen has been spotted for the first time since she lost her unborn son Jack on Sept. 30. She wore a flowing maxi-dress for a grocery run with husband John Legend, as he dedicated his new tune to her strength.

Queen of Social Media Chrissy Teigen has been mostly silent ever since she suffered a heartbreaking miscarriage halfway through her third pregnancy on Sept. 30. She’s been in mourning with husband John Legend, 41, after they lost the baby boy they had already been calling Jack. The 34-year-old was photographed out in public for the first time sine her devastating tragedy on Oct. 15, as she went grocery shopping at a West Hollywood Bristol Farms market with John.

Chrissy looked stunning in a rust orange maxi dress by designer Petar Petrov. It featured long sleeves, an untied neckline and came down to her ankles. The cookbook author paired it with stylish matching leather boots with a slight heel. She wore her hair in a loose but stylish up-do, with soft tendrils on the sides. She kept her beautiful face covered with a black face mask and dark brown sunglasses.

The couple’s outing comes one day after John paid tribute to Chrissy during his moving performance at the 2020 Billboard Music Awards on Oct. 14. He sang “Never Break,” and dedicated it to his wife, saying “This is for Chrissy.” On Oct 15 after their market run, John shared a tweet featuring video of it and wrote, “This is for Chrissy. I love and cherish you and our family so much. We’ve experienced the highest highs and lowest lows together. Watching you carry our children has been so moving and humbling.”

He continued, “More than anything, we’ve heard so many stories about how so many other families have experienced this pain, often suffering in silence. It’s a club no one wants to be a part of, but it’s comforting to know we’re not alone. I’m sure Chrissy will have much more to say about this when she’s ready. But just know we’re grateful and we’re sending love to all of you and your families. We will hold each other’s hands through every tear, through every up and down, through every test. We promised each other this on our wedding day seven years ago, and every challenge we’ve faced has made that promise more powerful, more resilient. Our love will remain. We will never break.”

Chrissy had returned to social media for the first time three days prior, but just to comment on a post shared by Betches, which featured a Tweet by Kara Morehart, reading, “Just booked an eyebrow waxing appointment and I’m excited I’ll be wearing a mask so I don’t have to hear ‘mustache too?’” Chrissy simply wrote, “Finally, a giggle. Thank you.”

Chrissy’s last Instagram and Twitter post was on Sept. 30, when she made the painful revelation that she and John had lost their baby due to pregnancy complications. Chrissy had been on bedrest for 10 days prior to being hospitalized for bleeding and a weakened placenta. Despite several blood transfusions and plenty of IV liquids, Jack didn’t make it after his heartbeat became increasingly difficult to detect.

Chrissy told fans, “We are shocked and in the kind of deep pain you only hear about, the kind of pain we’ve never felt before. We were never able to stop the bleeding and give our baby the fluids he needed, despite bags and bags of blood transfusions. It just wasn’t enough,” along with black and white photos showing the tearful couple holding each other after the heartbreak, and eventually holding Jack inside a blanket.

She later referenced the couple’s two children, four-year-old daughter Luna and two-year-old son Miles, writing “We are so grateful for the life we have, for our wonderful babies Luna and Miles, for all the amazing things we’ve been able to experience. But everyday can’t be full of sunshine. On this darkest of days, we will grieve, we will cry our eyes out. But we will hug and love each other harder and get through it.”