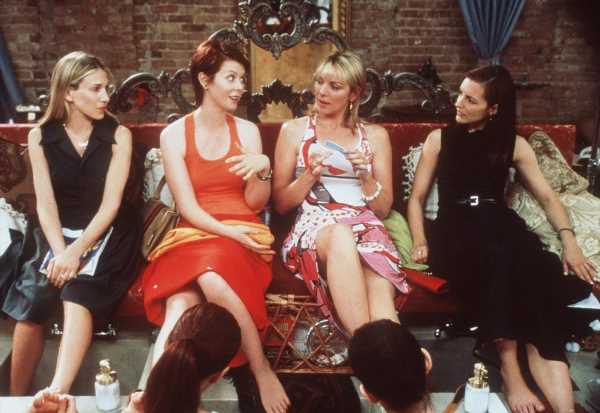 In the late ’90s, a little show called Sex and the City debuted allowing Carrie Bradshaw and her three best pals to become voices for single women everywhere. The series originally premiered on HBO but after the show concluded, it was given new life on other cable networks and therefore Sarah Jessica Parker and her castmates gained a whole new legion of fans. Fast-forward more than two decades later and the franchise followed up the iconic series with two movies and an upcoming reboot titled And Just Like That.

One of the reasons Sex and the City had such a loyal following is because it pushed boundaries. But as Cynthia Nixon explained, there was a scene that actually went too far and had to be cut.

Who Cynthia Nixon played in ‘Sex and the City’

Nixon played the role of Miranda Hobbes on the hit show. Her character was a feisty, fiery, lawyer who had a cynical outlook on men and romantic relationships in general. She did end up finding love with bartender Steve Brady. They eventually settled down and had a child together but before Steve, Miranda was swimming in a complicated and sometimes miserable dating pool.

That required a few uncomfortable and intimate scenes with other actors, and after filming one of those scenes showrunners decided it was a bit much to stomach.

The scene Nixon says went too far and never aired

Nixon revealed which scene that was several years back when she was a guest on Late Night With Conan O’Brien.

After Carrie got robbed in the episode “Anchor’s Away,” Miranda met Detective Stevens (Timothy Gibbs). The two went out on a date and Miranda became so intimidated by his looks that she gets nervous and had too much to drink. Nixon explained that the script called for her to vomit all over the detective while their characters were having sex. She talked about how they used projectile with beef stew chunks and said she enjoyed filming it. In the end though it was decided that the scene was a little too graphic and it was left on the cutting room floor.

So while viewers didn’t see that play out on screen, they did know that something bad went down that night because Miranda woke up with a hangover the next morning to find that Detective Stevens wasn’t there. The only thing he left behind was a number to her local AA chapter.

Nixon said another scene ‘devastated’ her

Another scene in particular “devastated” Nixon. It wasn’t an episode of the show though, it was in Sex and the City: The Movie when Mr. Big (Chris Noth) built Carrie that massive wardrobe closet. Nixon remembers hearing the audience clapping during that scene at the movie’s premiere in London.

“I was a little devastated by that. It seemed to me that the show was so much about female empowerment and about women making their own choices and women standing up for what they wanted and supporting themselves,” she said on The Wendy Williams Show (per Metro). “So, to me, to have this be a climax of the film, that your very wealthy husband built you a really nice closet for your clothes, I thought, ‘Wow, that’s not really what you love about the show, is it? Because that’s not what we were making it for.’” Nixon did offer praise happy about another thing the show was known for saying: “We love the clothes! I’m not saying we don’t love the clothes.”