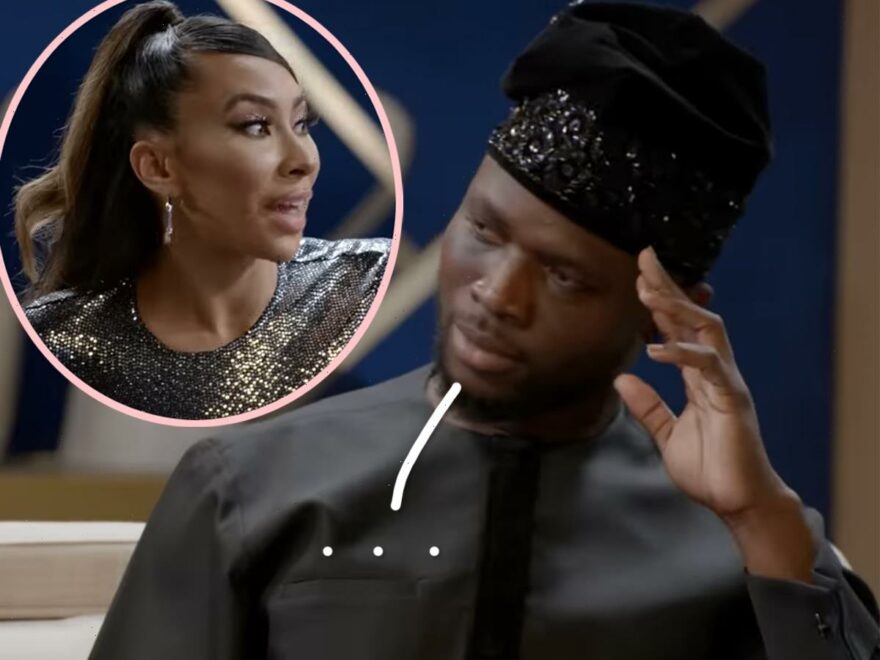 Hold up, did Love Is Blind‘s SK Alagbada cheat on Raven Ross?!

As you may know, while Raven initially connected with Bartise Bowden in the pods, she went on to get engaged to SK on season three of the Netflix series. The two had some rough patches in their relationship once they hit the real world, as they didn’t see eye to eye on where they would live or who was willing to compromise on certain things. Despite the few bumps in their journey to the altar, many fans were rooting for them to say “I do” at the end of the show. Unfortunately, that did not happen – shocking many viewers and even Raven.

But even though Raven and SK did not end up getting married, the pair still got their happy ending (maybe??) as they got back together after filming. During the reunion, the pilates instructor revealed their relationship has been going strong and even warned everyone who was reaching out to her boyfriend to:

Oof… That did not age well because two women have since come forward to accuse SK of cheating on Raven! The TikTok account @emmwho9 posted a video on Monday claiming someone went out with someone from Love Is Blind a few months ago:

“Put a finger down if you went on a date in April with a guy from Hinge and then you see that he’s actually on the show Love Is Blind and that he met you after the show was filmed, but is still with the same girl right now.”

She then put a finger down. Ch-ch-check out the video (below):

Hopefully they were on a break or something at the time because she seems so genuine ???? #loveisblind #loveisblindnetflix

While she did not name which contestant it had been at the time, she later followed up the post with another video of screenshots of text message conversations and DMs from SK that he sent after they met on the dating app Hinge. Their exchanges seemingly began on April 18 of this year, with the message reading:

He then can be seen asking about her day-to-day life with school and work, texting about where to meet up, and even talking about a trip to Cabo. The woman also showed that she reached out to Raven on Instagram. Alongside the evidence of their relationship, she wrote to the fitness guru:

“I’m guessing you have now seen the TikTok video since SK unfollowed me, as you can see the last text he sent me was four months ago. I’m so sorry, but if you were together then I am sending you receipts of everything in case you want them.”

See the receipts (below):

I didnt want to do this, but hate to see cheating men get away with it.

And that’s not all! TikTok user @hannahbethstyle also hopped on the social media platform this week to accuse the reality star of infidelity. Without mentioning his name, she first said:

“When your ex takes you to Europe and talks about getting back together, but on the trip you find out he has a fiancée from a reality show he did on Netflix, but then he tells you it’s all fake and for the $. So, you say you’ll believe him if you get to meet this fake fiancée, but that never happens. And now, you’re waiting for him to be exposed as the actual villain instead of this phony angel he portrayed himself as.”

She then dropped her receipts. In a follow-up video on Friday, the woman from Dallas – the same city where season three of Love Is Blind was filmed – revealed she and SK began dating in 2019 but “broke up mutually & remained friends.” Then, in 2021, she claimed he reached out to invite her to go to Europe, “specifically Ibiza.” She included a bunch of pictures and videos of them together from their travels between July and August of 2021, including one video of them kissing. She continued:

“We left Ibiza & flew back to Madrid. I asked to see his phone to send pics to myself but ended up seeing messages from a contact name ‘fiancé.’ I waited to confront him until dinner bc I was trying to wrap my head around what I saw.”

When she confronted him about it, SK claimed that Raven and him were only friends and that the show was for money. The woman “didn’t 100% believe” but decided to trust him anyway since he’d never given her a reason not to before. They ended up extending their getaway and spent some time in London. Before they left to return home, she said:

“I brought up my reservations one more time before we flew home and said I should meet Raven if this is all fake, and he agreed. I found her on IG, liked her pics, & didn’t think anything of it. As we were waiting outside for an Uber, I glance over & see him receive an IG notification from her and the message said ‘Um who this?’ With my profile attached. He says to me: ‘I told you I was going to handle it.’ So I was like that’s weird but ok…”

Huge red flag, if you ask us!

Flash forward to this year, SK and the woman went to Cabo together in May. Possibly the same trip he referenced in his messages to the first girl?! The timelines certainly add up! They then were supposed to meet up again in September to go to Miami but the trip ended up falling through. Ch-ch-check the messages (below):

this is my truth & the girls will not be silenced. #loveisblindseason3

Raven hasn’t responded to the latest allegations. But according to Us Weekly, she did shut down the allegations on Instagram Live, saying:

“Rumors are rumors. That’s my man and I’m sticking beside him.”

Messy, messy, messy! What are your thoughts on the cheating allegations, Perezcious readers? Are you buying it? Sound OFF in the comments below!