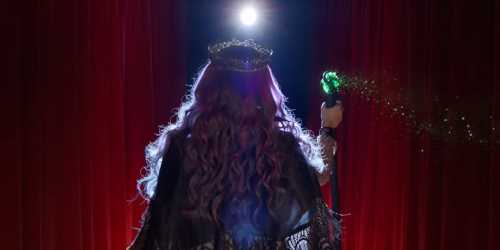 With just one week to go until the premiere of Descendants 3, Disney just released a major teaser video focused on their new villain – and it’s not Hades!

In the video, while we don’t see their face, the new villain exerts their new reign and we’re picking up major clues as to who it is.

The upcoming flick will begin on “VK Day” as the original VKs return to the Isle of the Lost to select four kids to bring back to Auradon Prep, where they have a chance at success, happiness and fulfillment.

Meanwhile, Mal (Dove Cameron) knows she must chose to close the barrier to the Isle of the Lost permanently to prevent her nemeses Uma and Hades from wreaking vengeance on Auradon.