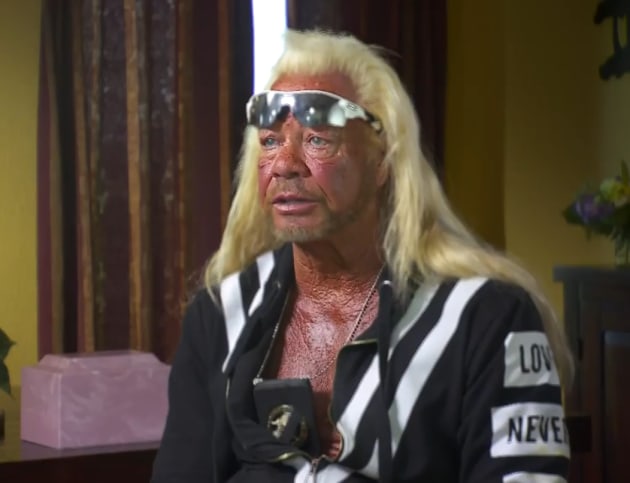 On June 26th, Duane “Dog the Bounty Hunter” Chapman became a widower when his wife, Beth, passed away after battling cancer.

And understandably, he’s having a tough time dealing with that huge loss.

Dog has made many public statements admitting how much he’s struggling, each more heartbreaking than the last.

Last weekend, a memorial service was held for Beth in Colorado — it was open to anyone and everyone who wanted to remember her, so several people were there to document what he said in his speech there.

At one point in the service, he said “She will never be dead to me. She is in another place.”

“I’m gonna get to heaven and make her so proud,” he insisted. “She’s gonna say it like she said here, ‘That’s my man right there, that’s big daddy right there.'”

He also recalled one of the last conversations he had with her, one where she told him “Please big daddy, please let me go.”

“I still haven’t let her go,” he told the people in attendance.

He said that he’s never felt so bad, and that “If there’s a God, he won’t let me live that long without her.”

It seems like at the moment, he’s not too interested in the idea of going about things without Beth by his side — at another point in the service, he said something similar.

“In the ’70s, I did 18 months in the Texas penitentiary,” he said, “and I told God yesterday I’d do five years, ten years day to day just to kiss her again.”

Now, Dog is sharing the same sentiment on Instagram … except this time, it’s more of a threat.

On his page, he shared this meme that reads “Don’t piss off old people. The older we get, the less “life in prison” is a deterrent.”

In his caption, he wrote “Fugitives beware,” and hashtagged his new show, Dog’s Most Wanted.

Another hashtag he used?

We know that Beth did a lot of filming for this upcoming show — she refused to do chemo so she could travel with him to shoot it.

From what we’ve seen, her failing health was part of the show as well.

It will be so heartbreaking to see how this all plays out on television.

Especially since, judging by this post, Dog is considering taking some of his grief out on the fugitives he catches.

In the comments, his faithful followers were quick to offer him love and support — and it looks like some of them are genuinely afraid he’ll land himself in prison.

One woman commented “I told my husband those fugitives better really watch out for Dog now!”

Another person wrote “Keeping you and your family in my thoughts. Keep your head clear, Dog. Beth is watching from above, cheering you on.”

“I know it’s hard but don’t let your grief cloud your judgement and diminish your morals.”

So many people noted his “Dog without Beth” hashtag and told him that he would never truly be without her, that she was watching over him always.

Celebrities Who Died in 2019: In MemoriamStart Gallery

We hope he’s able to deal with his grief in a healthy way, and that he manages to get through this immensely difficult time as easily as he possibly can.