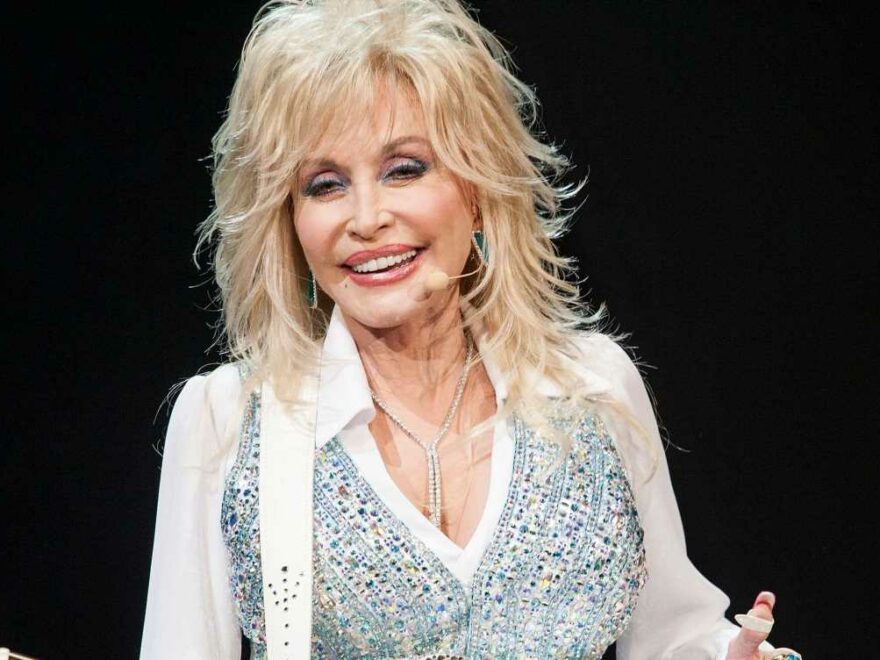 Dolly Parton has been relevant basically all of our lives…and our parents lives…and their parents lives. I mean, that’s what happens when you’ve been in the limelight for roughly Six! Decades!! Obviously, with time well spent comes money well-earned, and Auntie Dolly has loads of it. Hellooo, she even had enough extra cash to donate to COVID-19 vaccine research, which pretty much had us all like:

Clearly, real heroes wear corsets, red lipstick and voluminous blonde hair. Anyway, between Dolly’s iconic music, acting roles, philanthropy and so much more, she is Filthy Stinkin’ Rich. Let’s dig right on in to Dolly’s very heavy pockets, shall we?

Her music makes an insane amount of money…still

By now, you’ve heard the bangers that are “Jolene,” “9 to 5” and “I Will Always Love You.” But before Dolly was racking in coins from music streaming services, she was selling hundred of millions of albums. She’s had 41 top-10 albums, 25 No. 1 hits on Billboard’s country chart, and has sold more than 100 million records. Tally all that up and it equals wads on wads on wads of money. Exhibit A: In 2021, Forbes reported that “9 to 5” and “Jolene” gross about $6 million to $8 million in royalties per year. And a big part of that is because…

Dolly started her own publishing company at just 20-years-old

Here’s the deal: Dolly owns her entire catalog of music, which consists of more than 3,000 song credits and is estimated to be worth about $150 million, according to Forbes. This is wildly significant, especially when people want to sample or cover her work. For instance, when the late-great Whitney Houston famously remade Dolly’s “I Will Always Love You” for The Bodyguard in 1992, it was a smashing success. So much so, that Dolly made $20 million in royalties alone off of it. TL;DR—Dolly receives a h-e-f-t-y-publishing fee Every. Single. Time. one of her songs is played, covered, used in movies, etc.

Dolly has had a super successful acting career

In addition to being a badass singer and songwriter, Dolly also took her talents to the big and small screens, starring in movies and TV shows as early as 1980. It’s estimated that she’s made about 22 films, from 1989’s Steel Magnolia’s to Netflix’s 2020 movie Christmas on the Square. Not much is known about Dolly’s earnings from her acting work, but with such a long list of credits, you know the checks aren’t too shabby.

Did I mention she has her own theme park???

Lol, yep! It’s called Dollywood Parks and Resorts, to be exact, and it’s actually considered to be her largest asset. The Tennessee-based amusement park was founded in the ’80s and is the state’s most-visited attraction. Tickets range between $84 to $109, and an estimated 3 million people visit the park each year, so yeah, you do the math there. JIC you didn’t want to, that’s a minimum of $252 million a year! Casual! FWIW, Dolly owns 50% of the business and Forbes estimated that her portion is worth about $165 million.

Dolly also owns eight restaurants and dine-in theaters around the same area as the amusement park. On top of that, there’s also a water park and spa nearby Dollywood that Dolly is a co-owner of too. Her portions are said to be worth about $20 million and $15 million, respectively.

So, what is Dolly Parton’s net worth?

Oh, that’d just be a lil ole $650 million, according to Celebrity Net Worth. If you’re feeling like that may be low, particularly compared to the bank account of, say, Madonna, keep in mind that Dolly has bills, y’all! Like, overhead and taxes and the money she gives away and all that. But still, our girl is Not! Hurting!