The Greens have celebrated the outside chance of a hung parliament after this month’s state election at a campaign launch in the winnable seat of Richmond on Wednesday night.

A cutout poster of candidate Gabrielle de Vietri’s face was decorating Perry’s bar on Smith Street in inner-Melbourne’s Collingwood, which is within the Richmond electorate, at the gathering of supporters. 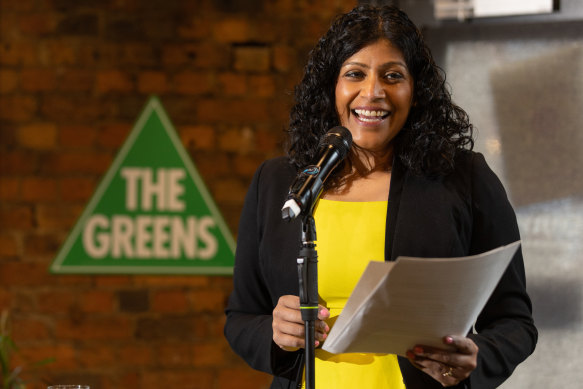 “Labor is terrified of losing this seat. And they’re going to lose it,” de Vietri said.

Party leader Samantha Ratnam, an upper house MP representing the Northern Metro region of Melbourne, hoped swings away from the major parties at the federal election would be replicated in Victoria next weekend.

“The question now is whether Labor can hang on to a majority, or will they rely on the Greens to form a progressive minority government?” she said to cheers.

“Well, I’m here to tell you that we are ready. We are ready to work cooperatively and constructively with Labor.” 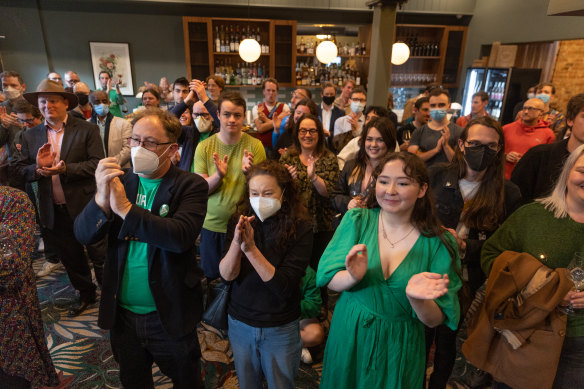 Greens supporters filled the Collingwood bar, in the winnable electorate of Richmond.Credit:Jason South

Earlier on Wednesday, the minor party released its demands of Premier Daniel Andrews to ensure support from the Greens in the event of a hung parliament.

The Greens would seek to push Labor to cap rent increases in line with wages, raise the age of criminal responsibility from 10 to 14, halt native forest logging, ban onshore and offshore gas exploration, and beef up integrity powers.

Consecutive polls have put Andrews in an election-winning lead, but a minority government is increasingly possible if Labor were to lose at least 11 of its 55 seats.

Andrews this week reaffirmed his position of 12 years that he would not offer, or enter into, a deal with the Greens.

The Greens already hold three seats in the lower house, in Melbourne, Prahran and Brunswick, and Ratnam said the MPs “would love some reinforcements” with hopes of gaining Richmond, Northcote and Albert Park.

“And I, too, am so looking forward to some company in the upper house,” Ratnam said.

“I’m looking forward to seeing all of you out there on the campaign trail and of course celebrating some mighty fine wins on election night.”

Deputy party leader and the member for Melbourne Ellen Sandell declared it would be Ratnam accepting a call from Andrews on November 26 to hear her demands.

“I have never been more hopeful,” Sandell said.

The Greens had been hopeful of securing the balance of power at the 2018 election, when a tight outcome was predicted, but lost four of its five upper house seats and the lower house seat of Northcote. Dr Tim Read picked up Brunswick, but the party failed to win Richmond where Labor increased its majority.

Macedon Ranges candidate Marley McRae McLeod, 18, a student at the University of Melbourne, also addressed Greens supporters on Wednesday night and teared up discussing the consequences that climate change could have on her generation.

She gave a shoutout to her fellow teenage candidates.

“We are a force to be reckoned with,” McRae McLeod said.

The Labor Party and Coalition separately held their formal campaign launches on Sunday, before early voting opened on Monday.

Just over a week remains of the campaign until polls close on November 26.