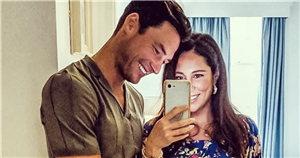 EastEnders star James Farrar is set to become a dad for the first time as his wife Ali is pregnant.

The actor, who plays Sharon's long lost brother Zack Hudson on the soap, posed in a sweet mirror selfie alongside his wife to share the news.

James and Ali are clearly delighted with the news as they beamed in the touching photo.

James' wife Ali announced the happy news on her Instagram page as she shared the gorgeous snap.

She wrote in the caption: "Mama and Papa" followed by a shooting star emoji.

Ali then added three hashtags to the post, which read: "#babylove #firstbumppic #love".

The couple were greeted with excited messages of congratulations from Ali's followers.

One wrote: "Eeeeekkkkk CONGRATULATIONS you gorgeous humans" next to a trio of red heart emojis.

"Hugest congratulations," a third said alongside a string of party popper emojis.

.Meanwhile, James commented on the post to compliment his wife as he called her a "sexy mama".

James and wife Ali have been together for 13 years. In 2019, James shared a gorgeous photo of the pair together to gush over their romance.

He said: "When we first met we were "unavailable". Our interests were football, netball, partying and being rascals.

"We couldn't help falling for each other and a lot has happened since.

"In our 12 years together Ali has spent time travelling the world educating herself on Eastern and Western philosophy. I spent a year away from London filming a TV show."

He continued: "We moved to Blackheath together and got married."

James then continued to praise his wife for her successful writing career, showing just how proud he is of her.

Actor James stormed the set of EastEnders as he made his debut to Albert Square earlier this year as Zack Hudson.

Zack is Sharon Watts' long lost half brother, whom she met as she attended her biological dad's funeral.

Since moving in with Sharon on Albert Square Zack has caused quite the stir.

During Nancy's road to recovery, she has sparked a romance with Zack. But, he was soon warned off by an angry Mick Carter, who discovered Frankie and Zack were the ones who ran over Nancy following the hit and run.

But, it appears he hasn't listened to landlord Mick, as Zack was seen telling Nancy he wished to continue their budding romance in secret.