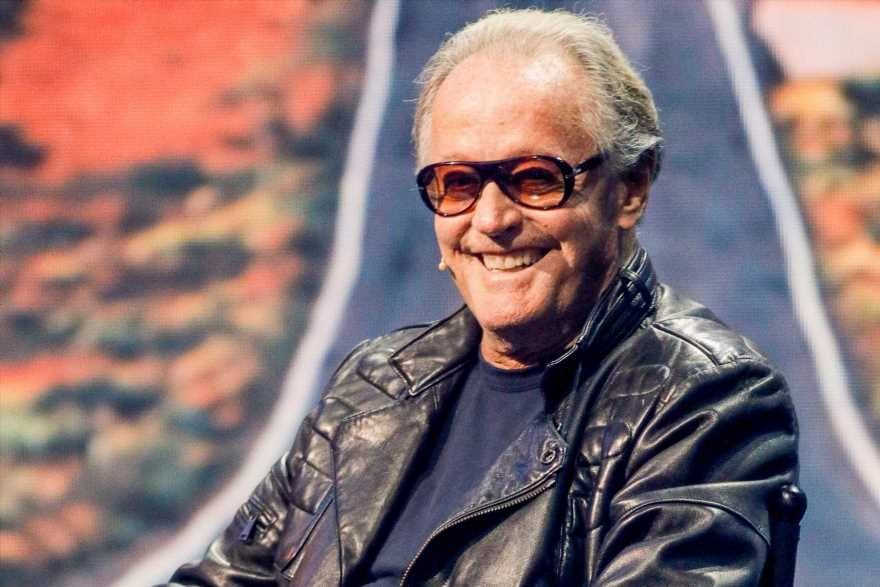 Peter Fonda, who became a counterculture icon when he co-wrote, produced and starred in seminal 1969 road movie “Easy Rider,” then showed Hollywood he could act about three decades later in “Ulee’s Gold,” for which he was Oscar-nominated, died on Monday. He was 79.

Most recently, Fonda played Mephistopheles in the Nicolas Cage vehicle “Ghost Rider” and a biker, for the umpteenth time in his career, in the John Travolta-Tim Allen comedy “Wild Hogs”; had a nice supporting role as a bounty hunter in the 2007 remake “3:10 to Yuma”; and reunited with Cage in the 2015 Louisiana political drama “The Runner,” in which Fonda played the younger actor’s father.

The first significant step Fonda (pictured above with sister Jane Fonda) took in the path toward the success he would achieve through “Easy Rider” was a starring role, with Nancy Sinatra and Bruce Dern, in Roger Corman’s 1966 Hells Angels drama “The Wild Angels.” It was the first of a series of successful biker pictures produced by American International Pictures that screened at drive-ins across the country.

In his 1998 autobiography, “Don’t Tell Dad: A Memoir,” Fonda said that he got the idea for “Easy Rider” while staring at a poster for “The Wild Angels.”

“I understood immediately just what kind of motorcycle, sex, and drug movie I should make next,” Fonda wrote. “It would not be about one hundred Hell’s angels on their way to a funeral. It would be about the Duke and Jeffrey Hunter looking for Natalie Wood. I would be the Duke and (Dennis) Hopper would be my Ward Bond; America would be our Natalie Wood. And after a long journey to the East across John Ford’s America, what would become of us? We would be blasted to bits by narrow-minded, redneck poachers at dawn, just outside of Heaven, Florida, and the bed of their pickup would be full of ducks. I mean really full of ducks.”

With Fonda and Hopper exchanging ideas and planning the film, Fonda went to Europe to appear in “Metzengerstein,” a segment of the film “Spirits of the Dead,” starring Jane Fonda and directed by her then husband, Roger Vadim. On-set he met author Terry Southern, with whom he became fast friends. Fonda, Southern and Hopper would together write the Oscar-nominated screenplay for “Easy Rider,” and Fonda would produce. Hopper directed. (Jack Nicholson scored the film’s second Oscar nomination for his supporting performance.)

The film won the “best first work” award at the Cannes Film Festival in May 1969. And in 1998, “Easy Rider” was added to the National Film Registry, having been deemed “culturally, historically or aesthetically significant.”

(Unfortunately, Fonda and Hopper would fight for decades over who really came up with “Easy Rider.”)

While mainstream critics had ignored previous counterculture films, they heaped praise upon “Easy Rider,” and the film was a significant box office hit as well with $41 million, third best for the year. In Hollywood the success of the movie on all fronts marked the beginning of a changing of the guard, with a new generation of independent-minded filmmakers ruling the business until “Jaws” changed everything in 1975.

But the astonishing career that some predicted for Peter Fonda in the wake of “Easy Rider” never came to pass (in his review of the film, Howard Smith of the Village Voice wrote, “Terry Southern wrote the script which will do for Fonda what none of his other roles did. That is, make him an enormous hero-star. He comes off like a combination of Clint Eastwood and James Dean”).

Having ceded the director’s chair to Hopper, Fonda directed a film of his own, 1971’s “The Hired Hand.” In a fairly positive review, Roger Ebert described it as “a languorously spiritual Western about a young man who grows up into responsibility.” Writing in 2003, and thus with perspective, J. Hoberman of the Village Voice said the film, which was “largely misappreciated when it was released two summers after ‘Easy Rider,’ is a touching and absurd example of the hippie western. Less radical than Dennis Hopper’s ‘The Last Movie,’ not as cool as Monte Hellman’s ‘Two-Lane Blacktop’ (also from Universal’s doomed ‘youth’ unit), it’s still a film of considerable ambition and period piquance.”

Fonda directed two other films during the 1970s, 1973 sci-fier “Idaho Transfer,” which was barely released, and the mediocre road movie “Wanda Nevada,” which starred Fonda, a young Brooke Shields and Fonda’s father Henry. (It was the only film in which Peter and Henry Fonda appeared together.)

Fonda continued to appear in other people’s movies, but relatively few were notable. “Dirty Mary, Crazy Larry,” a rather silly car-chase movie, was quite successful at the B.O. for 20th Century Fox and latterly became a cult classic. There was much similar fare.

Fonda’s most high-profile acting assignment in the 1970s was his starring role in the “Westworld” sequel “Futureworld.”

He developed, according to the New York Times, “a reputation for being difficult and drug-addled” on-set.

In 1981 Fonda appeared, as Chief Biker, in Hal Needham’s execrable “Cannonball Run”; two years later he appeared in a film called “Dance of the Dwarfs.”

The early 1990s saw the rise of Peter’s daughter Bridget Fonda as an actress of significance, and when she starred with Phoebe Cates, Tim Roth and Eric Stoltz in 1993 independent film “Bodies, Rest & Motion,” Peter was cast in a supporting role as a motorcycle rider.

The thriving independent-film scene would prove a comfortable arena for Peter Fonda, with supporting roles in the indie crime dramas “Deadfall” and “Love and a .45” and a notable role as Dracula/Dr. Van Helsing in Michael Almereyda’s indie vampire tale “Nadja” in 1994.

At this point Fonda’s career had been significantly rejuvenated. He was even cast in John Carpenter’s $50 million “Escape From L.A.” and given the third screen credit (before Cliff Robertson as the president); unfortunately that 1996 film was a disaster in every sense.

The same year he kept his hand in on the indie scene with a small voice role on Alison Anders’ “Grace of My Heart.”

And then, finally, came redemption, in the form of the lead role in Victor Nunez’s 1997 indie “Ulee’s Gold.” Fonda played a Florida beekeeper who must tangle with some criminals to protect his family; Nick Nolte had turned the part.

Variety said: Since Peter Fonda had never been asked to give, and certainly had never delivered, an ambitious three-dimensional performance before, it must have taken courage on Nunez’s part to entrust him with this role. But Fonda has responded splendidly, with work that is reserved yet revealing, withholding but ultimately quite moving. With his cold eyes, erect stature, taciturn manner and deliberate vocal cadences, it is impossible not to compare the actor here to his late father. There are also intonations in Fonda’s turn that remind strongly of Clint Eastwood, but none of this takes away from this singular achievement Peter Fonda has managed after 35 years on the screen.”

Fonda received an Oscar nomination for best actor, and a classy profile in the New York Times. He didn’t win the Oscar (it went to Jack Nicholson for a much showier performance in “As Good as It Gets”).

About the time of the hoopla over “Ulee’s Gold,” the by nature exuberant Fonda came out with his long-in-the-works autobiography, much of which was devoted to his feelings about his recalcitrant father.

In 1998 Fonda toplined an NBC adaptation of Shakespeare’s “The Tempest” set during the Civil Wars in the Mississippi bayous, but he acquitted himself better in a supporting role in Showtime’s “The Passion of Ayn Rand” as Rand’s cuckolded husband.

He appeared with daughter Bridget in Dwight Yoakam’s unremarkable Western “South of Heaven, West of Hell” and in kiddie pic “Thomas and the Magic Railroad,” both in 2000. Fonda was among the indie-pic veterans who appeared in Moises Kaufman’s adaptation of his play “The Laramie Project” into an HBO telepic in 2002, and he starred as a priest in the Salma Hayek-directed Showtime telepic “The Maldonado Miracle” in 2003.

Fonda played Mephistopheles in the Nicolas Cage vehicle “Ghost Rider” and a biker, for the umpteenth time in his career, in the John Travolta-Tim Allen comedy “Wild Hogs.” He had a nice supporting role as a bounty hunter in the 2007 remake “3:10 to Yuma.”

Peter Fonda was born in New York City, the only son of Henry Fonda. When he was 10 years old, his mother committed suicide in a mental hospital. He attended the University of Nebraska at Omaha and joined the Omaha Community Playhouse. He did some work on Broadway, then did some TV guest appearances (“Naked City,” “Wagon Train,” “The Alfred Hitchcock Hour”) and a co-starring role in the feature “Tammy and the Doctor” opposite Sandra Dee (yes, he played the doctor). He also appeared in Robert Rossen’s 1964 drama “Lilith,” in which Fonda played a mental patient involved in a love triangle with the characters played by Jean Seberg and Warren Beatty, and starred that year in “The Young Lovers,” a little-remembered romantic drama directed by Samuel Goldwyn Jr.

Then Roger Corman’s “The Wild Angels” set him on his career path.

Daughter Bridget retired from acting in 2002.

Peter Fonda was married three times, the first to Susan Brewer, the second to Rebecca Crockett.

In addition to Bridget and her husband, film composer Danny Elfman, survivors include Fonda’s third wife Margaret (Parky) DeVogelaere, whom he married in 2011; and son Justin, a cameraman, from his marriage to Brewer (as is Bridget).