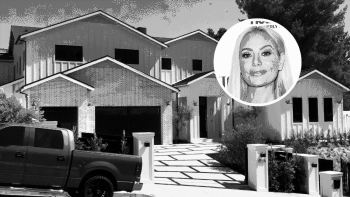 Though she and her husband, British property developer Paul Kemsley, have been plagued by highly-publicized reports of legal and financial woes, “Real Housewives of Beverly Hills” cast member Dorit Kemsley has managed to cough up $6.92 million for a brand-new Los Angeles mansion, records reveal.

Located in a primo pocket of the increasingly posh Encino neighborhood, the all-new structure was never on the market, so photographs and details are notably scant. Still, it’s known that the all-white house features a partially brick front facade, plus a three-car garage and a pool/spa combo out back. The spec-built abode — which replaced a much humbler midcentury modern residence — is done up in the trendy “modern farmhouse” style, with an open-concept floorplan. Although its actual square footage and various interior features remain a mystery, it’s likely the house will be prominently featured in all its glory on a future season of RHOBH.

And as has been extensively chronicled on their reality show, the Kemsleys currently reside in a multi-story mansion high in the mountains above Beverly Hills. Partially owned by nightlife entrepreneur Sam Nazarian, a Kemsley business partner, the towering faux-Mediterranean villa has been on the market for over two years and is currently asking just under $7.5 million, after being initially listed at a decidedly optimistic $12.75 million.