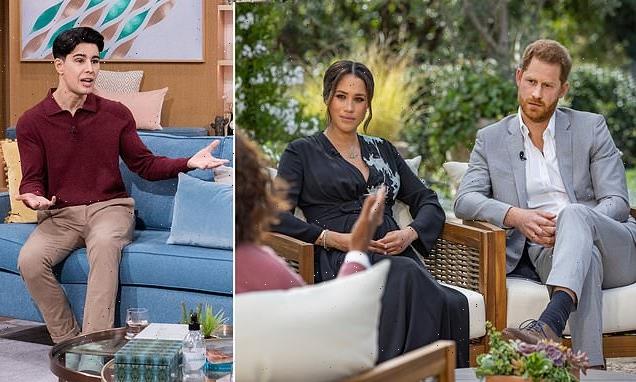 Cheerleading for Prince Harry and Meghan doesn’t appear to be very lucrative.

Despite all the hype surrounding his sycophantic book about the Duke and Duchess of Sussex and their decision to quit royal duties, Finding Freedom, it turns out that Scobie’s business is in the red. The firm, MeYou Ltd, faced a ‘compulsory strike-off’ after Scobie, 40, failed to provide legally required financial information since 2019.

Late last week, he filed three sets of accounts in one go — and the latest reveals a deficit of £17,000.

While his hagiographic book went into cringe-making detail about Harry’s romance with the American former actress, his company accounts for 2021 comprise just two pages, with only one containing any numbers. 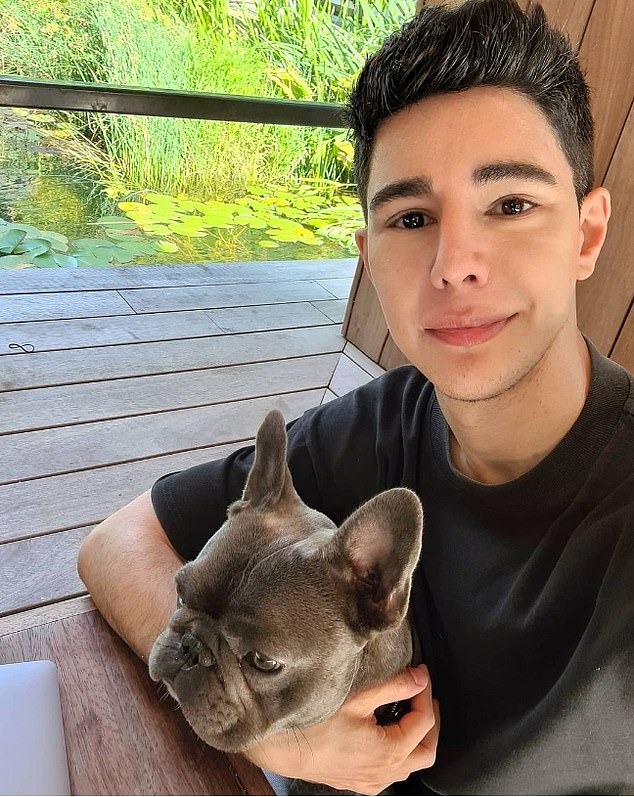 Failure to have provided financial details would have resulted in a fine of £1,500 for accounts that are more than six months overdue, according to Companies House. If a firm is struck off compulsorily, all its assets can be seized by the Government.

A former writer on the celebrity gossip magazine Heat, Scobie is not a details man. In August 2020, he told The Times he had ‘just turned 33’. Then, he said he was 38. Companies House stated that he was born in July 1981, making him 39, at that time.

Scobie, who’s royal editor of U.S. website Harper’s Bazaar, was among those who whipped up criticism of the Duke and Duchess of Cambridge’s tour of the Caribbean last month, highlighting alleged public relations moments that smacked of ‘colonialism’, such as cropped images of the couple greeting fans through a fence in Trench Town, Jamaica.

Dad Bernie, 91, puts his boy in the driving seat 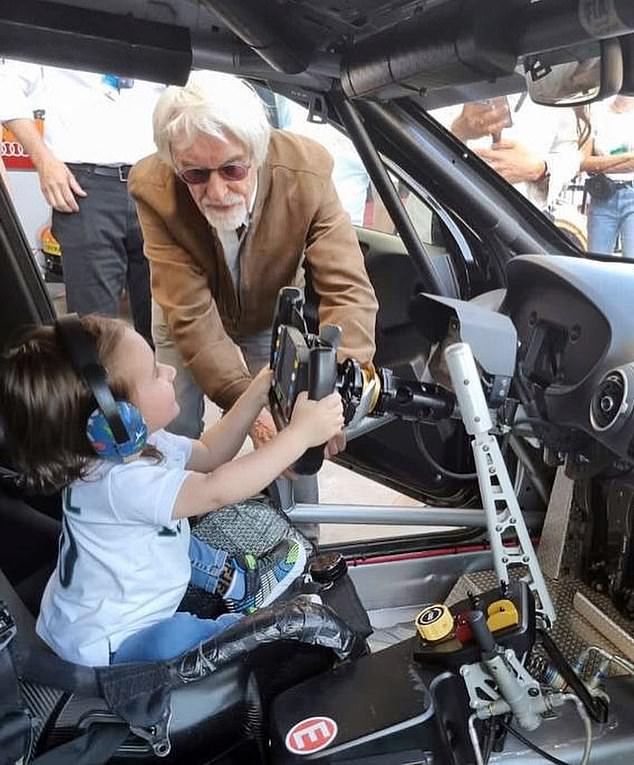 Formula 1 tycoon Bernie Ecclestone has been getting his son, Ace, behind the wheel of a racing car, even though the boy is only one

When you’re a father at 91, you don’t have any time to waste.

And Formula 1 tycoon Bernie Ecclestone has been getting his son, Ace, behind the wheel of a racing car, even though the boy is only one.

‘Ace’s first racing car experience,’ says his mother, Fabiana, 44, who is the billionaire’s third wife. The tot is pictured with ear protectors at Interlagos circuit in Sao Paulo, in his mother’s native Brazil.

She was elected last year as a vice-president of the FIA.

That led to the motor sport organisation’s new president, Mohammed ben Sulayem, insisting that Bernie was not involved behind the scenes.

While Neil Parish was looking for tractors, Professor Beard was searching for works by 16th century Venetian painter Titian.

His epic Mini Cooper chase in 1960s classic The Italian Job is revered as one of the greatest film car scenes, but these days Sir Michael Caine is using a different set of wheels.

The double Oscar winner, 89, is using a wheeled walking frame as he recovers from major surgery on his back.

In March, his wife, Shakira, told me: ‘He had a back operation quite recently. He had spinal stenosis.’ 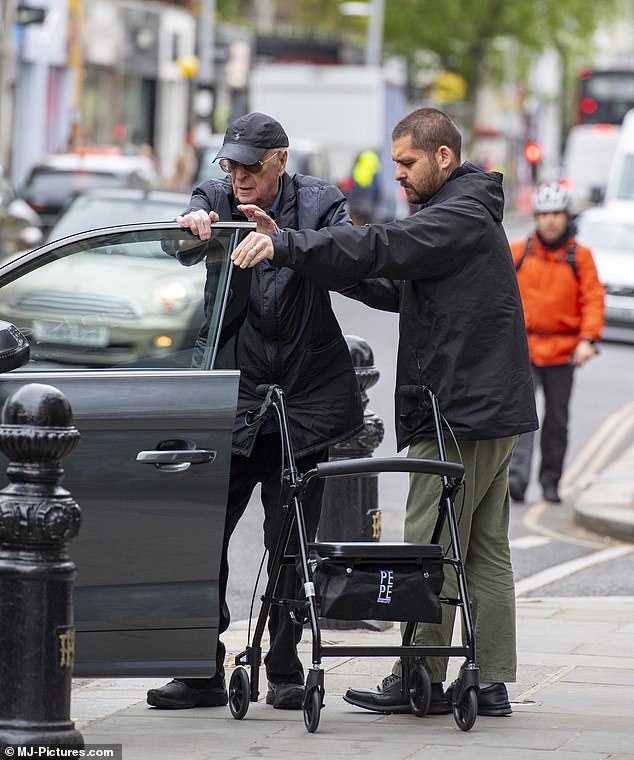 Double Oscar winner, Sir Michael Caine, 89, is using a wheeled walking frame as he recovers from major surgery on his back

‘He’s a lion, actually. The operation was fantastic. He’ll be up and dancing again soon.’

The Zulu star, who had used a walking stick during public appearances since he broke his ankle in a nasty fall on ice in 2018, said earlier this year: ‘I have a spine problem which affects my leg, so I can’t walk very well.’

Yesterday, Anthea was mourning Jean, who has died of pneumonia at the age of 91.

‘When I was much younger, I’d have railed against this but, I am my mother’s daughter and, on reflection, I’m ticking off a long list of thank-yous for the lessons she’s taught me,’ says the 61-year-old. ‘They begin with basic manners; table etiquette was high on her agenda; then skills — I’m not sure I’d have passed my Blue Peter audition if she hadn’t made me handy with scissors and glue.’

Jean was saddened by Anthea’s fall-out with her sister, Wendy, a fellow presenter best known for Channel 4’s Pet Rescue.

Wendy said in 2018 she had cut all ties to her older sister after a row over money she allegedly owed her.

Fancy going to bed with Robbie Williams? The pop star is bringing out his own range of pyjamas. They will be created in collaboration with Australian fashion designer Camilla Franks. ‘It is really, really comfortable and you feel really, really glam,’ the singer says of the set of jim-jams. ‘It is like wearing a stage outfit, but they are pyjamas. It is a unique niche.’ With Take That, Williams did once sing Why Can’t I Wake Up With You…

Prince Harry was pictured sporting a cowboy hat at a Texas rodeo earlier this year. Now, his old friend Natalie Pinkham is keen to saddle up.

The Sky Sports presenter, 44, who once suffered the indignity of being plastered over a newspaper in a boisterous embrace with Harry, attended a cowboy-themed fancy dress party over the weekend. 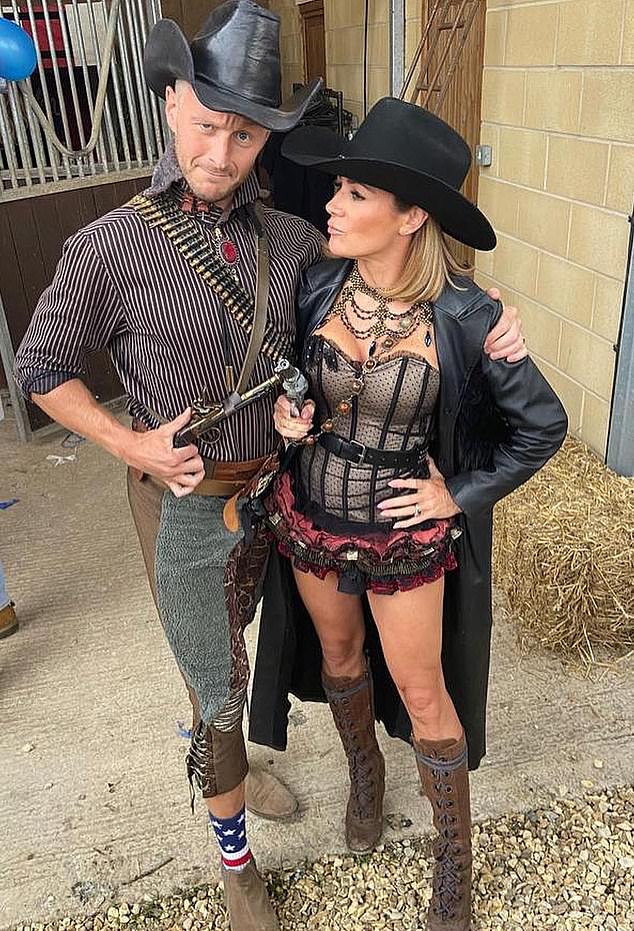 Sky Sports presenter, Natalie Pinkham, 44, who once suffered the indignity of being plastered over a newspaper in a boisterous embrace with Harry, attended a cowboy-themed fancy dress party over the weekend

She’s a protegee of fiery cook Gordon Ramsay, but Angela Hartnett has a far more scary critic — her own mother.

‘She has her moments, for sure,’ the Michelin-starred chef, 53, says of Giuliana, a former dinner lady and nanny whose parents emigrated to Wales from Italy.

‘If something isn’t right, she lets me know. And in the past I’ve made things and she’ll say, “No, this isn’t nice”, and she’ll throw it in the bin.

‘I would get more nervous cooking for my mum than I would for Gordon.’