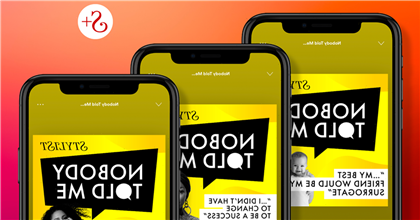 Hosted by Stylist, Nobody Told Me, season two, continues to share the stories of real women who have learned some of life’s toughest lessons, but have lived to tell the tale.

Nobody Told Me is back with season two, and we’ve got a whole host of powerful stories to share.

Just when you think you’ve got life sorted, somebody – or something – throws you a curve ball. Every day we encounter unexpected events that change what we do, how we think and who we are; but it’s how we deal with those moments that really matters.

Hosted by Stylist, Nobody Told Me will share the stories of real women who have learned some of life’s toughest lessons, but have lived to tell the tale. Through their powerful first-person talks they’ll share the details of the moment that changed their lives forever… and the lessons they learned along the way.

Welcome to Nobody Told Me, season two

Episode 1: Nobody Told Me… I’d Carry On Working After Being Diagnosed With Incurable Cancer

In episode one we’re joined by Nicola Mendelsohn CBE (@nicolamen). Nicola is a mother-of-four and Facebook’s Vice President for Europe, the Middle East and Africa, where she’s worked for the last seven years.

Nicola has also been living with an incurable blood cancer called Follicular Lymphoma for the past four years. In that time, she has undergone two years of gruelling immunotherapy and chemotherapy, while dealing with the emotional and mental turmoil of living with a poorly understood cancer. Through it all, Nicola has kept on working.

Episode 2: Nobody Told Me… Losing My Hair Would Turn Me Into A Successful Businesswoman

In episode 2 we’re joined by businesswoman and beauty influencer Gina Knight (@ginaknightwigdesign). Gina was diagnosed with stress-induced alopecia in 2013, after 12 months of visits to GPs and trichologists to find an answer to why her hair was falling out in handfuls.

After struggling to find textured wigs for women like her who were suffering with hair loss, the former salon manager found a solution, launching her own business, Gina Knight Wig Design, to provide confidence and comfort to thousands of women.

Episode 3: Nobody Told Me… Refusing Surgery As A Child Would Be The Best Thing I Ever Did

For episode 3, we’re joined by the remarkable Sinéad Burke (@thesineadburke). Sinéad is a teacher, writer, broadcaster and campaigner, and is on a mission to change the fashion industry from within. Sinead is a little person – the term she favours when referencing her achondroplasia, the most common form of dwarfism that means she has shorter-than-average limbs.

Episode 4: Nobody Told Me… It’s OK To Be Sad

In this episode, we’re joined by journalist, author, and mental health campaigner Bryony Gordon (@bryonygordon). Bryony began her career in journalism at 18 – building up a name for herself as a successful columnist and features writer before winning Young Journalist of the Year in 2007.

In spite of an incredible successful professional life, Bryony’s battle with mental illness has plagued her since childhood. Here she talks about suffering with OCD since she was 12, her struggle with bulimia, depression and anxiety, and entering rehab in 2017 to tackle alcoholism.

Episode 5: Nobody Told Me… I’d Have To Date In Secret

In this episode, we’re joined by beauty influencer and creator and host of the podcast What Would The Auntie Say?, Anchal (@anchalmua). Anchal is a British-Indian make-up artist, who has built a large online community through digital make-up tutorials and honest reviews. After leaving university, she spotted, in her words, what little visibility and representation brown girls had in the online beauty world.

In 2020, she launched her podcast, where she invites guests to talk about topics away from the fear of judgment by the aunties – a catch-all term for the judgmental elders in the South Asian community.

Episode 6: Nobody Told Me… I Didn’t Have To Change To Be A Success

In episode 6 we’re joined by TV presenter AJ Odudu (@ajodudu). AJ is one of Britain’s most exciting presenters and personalities, but her route to success has been neither easy nor straightforward.

Growing up, she had her sights set on being a TV presenter from an early age, but as a Black girl from Lancashire, she’s used to not fitting in, experiencing racism almost daily. But she wasn’t prepared for the discrimination to continue as she tried to forge her career. This is AJ’s story in her own words.

Episode 7: Nobody Told Me… My Best Friend Would Be My Surrogate

In episode 7 we’re joined by Rachel. Rachel was diagnosed with MRKH when she was just 16. It’s a female reproductive disorder that presents differently from person to person, but in Rachel’s case meant that while she has ovaries and produces eggs, she cannot carry a baby herself.

It wasn’t until she met her partner Sam that she began to face how she really felt about motherhood and starting a family, and began to look at her options. After revealing her fertility struggles to her best friends from university, Rachel got a phone call that changed her life. Her best friend Abi was offering to be their surrogate.

This is Rachel’s story in her own words.

Episode 8: Nobody Told Me… The Importance Of Being Alone

In episode 8 we’re joined by award-winning presenter and author Vick Hope. Born in Newcastle, Vick was so adamant that she wanted to go to Cambridge to study modern languages that she paid for her own evening courses and shocked her parents and school when she won a place.

Today, Vick is not only a hugely successful TV and radio presenter, she also speaks four languages, has worked with Amnesty International since she was 16 years old, has written two children’s books, and came fourth in Strictly Come Dancing in 2018. But it’s also that desire to impress, to always say yes, to seize every opportunity and to please everyone around her, that led her to have a complete burnout a few years ago. Something so many of us can relate to in a world that equates busyness with success. This is Vick’s story in her own words.