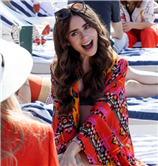 Will she stay or will she go?

This is the question Netflix viewers were left to ponder at the conclusion of Emily in Paris Season 2, which featured Lily Collins’ title character unsure whether to remain in The City of Love or return to Chicago.

“I’m dying to know what that decision is, ‘cause I don’t know. I’m as confused as Emily was,” the star told Elle before season 2 dropped in December 2021.

“I think Emily is blown away that Sylvie would want her to come with her. And then at the same time, she now has found this relationship with Alfie and maybe she’d love to go to London.”

Collins may not know what happens next on the beloved drama, but we’ve collected all the clues and spoilers we can find to help fans get extra excited for what’s on tap.

WHAT WILL SEASON 3 FOCUS ON?

“She has reasons to pick a number of doors at the end of season 2, and our challenge is deciding which of those doors she’s going to choose and why. That’s what season 3 is going to be about.”

IN WHAT WAY WILL EMILY STRUGGLE?

“When you live in a foreign country, one of the questions is, where’s your heart?” added Star in December.

“Emily is going to be struggling with that as well.”

WILL ALFIE COME BACK?

“I had the best year of my life working on the show and working with these people.

“So if I’m back, I’m back, but as long as I serve the story line and serve Emily’s story and do a good job, that’s what matters.”

For his part, Star teased that “London’s not far from Paris” and Emily shouldn’t write Alfie off.

[UPDATE: Laviscount has been made a series regular!)

“I think having that romantic relationship and the friendship with Benoît and Étienne is that we just got to see different vulnerabilities, a different spectrum of emotion and insecurity from Mindy,” the actress star told Us Weekly in March…

“I think she just wants to be happy. … She’s not team anybody except for Team Emily and she’s just about her being happy.”

WHEN WILL SEASON 3 PREMIERE?

We don’t know, but filming gets underway this summer.

“I’m foreseeing, with the arrival of Alfie, and, you know, [London], I think we maybe spend a little time over there,” actor William Abadie told Us Weekly.

“But nothing has been [made] official, so don’t take my word for it, but I think it might happen that we end up in London for a minute.”

WILL THERE BE AN EMILY IN PARIS SEASON 4?

Netflix previously announced the show has been renewed for Season 3 and 4.